The United States Mint releases today the large format US Navy 2.5 Ounce Silver Medal as the third strike in their Armed Forces Silver Medal series. Demand is expected to be strong for this collectible despite its relatively high $160 price tag.

US Mint product images for their Navy Silver Medal. The medal is encapsulated and comes with a US Mint Certificate of Authenticity.

The .999 fine silver medal goes on sale beginning at noon Eastern Time with a maximum mintage of only 10,000. To help in making it available to more customers, the US Mint has instituted an initial household order limit of one.

The US Mint’s Armed Forces series debuted in July with the Air Force 2.5 Ounce Silver Medal. That release was followed in August with the Coast Guard 2.5 Ounce Silver Medal. Both are no longer available, having sold out. The Marine Corps’ medal is scheduled for release this summer. Release dates for the Army and Space Force medals are yet to be announced.

In addition, smaller 1 ounce silver medals bearing similar imagery are planned, as are bronze versions. The 1-ounce editions of the Air Force and Coast Guard medals are expected to launch this summer.

US Navy Medal Designs and Specifications

Designs found on the new medal are emblematic of the history and mission of the US Navy.

The medal’s obverse or heads side features Navy destroyer John Paul Jones to the left, the historic USS Constitution to the right, and an F-18 Hornet formation overhead. 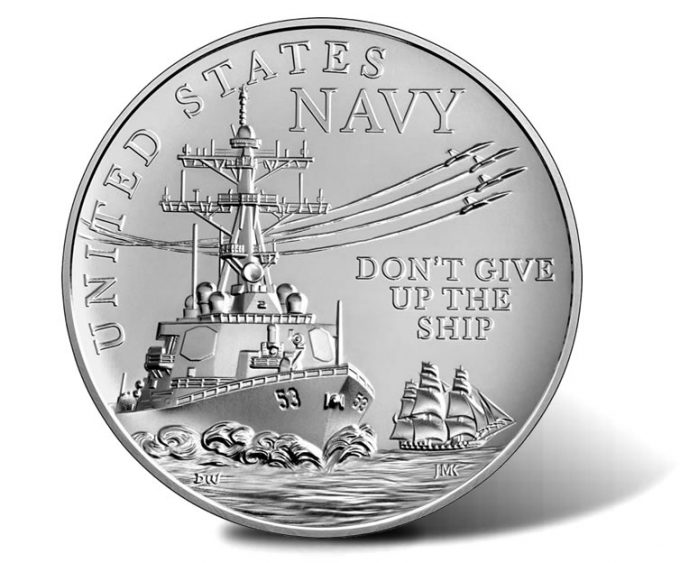 Obverse or heads side of the medal

Obverse inscriptions include “UNITED STATES NAVY” and “DON’T GIVE UP THE SHIP,” the latter spoken by mortally wounded Commander James Lawrence to his crew on the USS Chesapeake during the War of 1812.

Created by Artistic Infusion Program Designer Steve Ferris and sculpted by United States Mint Medallic Artist John P. McGraw, the medal’s reverse or tails side shows a line of sailors manning the rail while the American flag flies in the background. 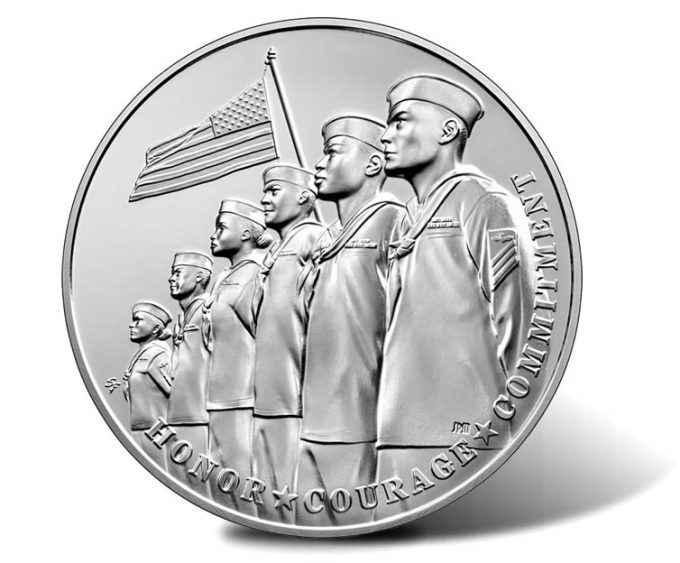 Reverse or tails side of the medal

The US Navy 2.5 oz Silver Medal may be purchased directly from the US Mint via their online store for silver medals.

Each medal is encapsulated and ships within a US Mint blue clamshell with cardboard sleeve.