A full 100-note consecutively numbered pack of Series 1934A $500 Federal Reserve Notes is the first submission under a new banknote pack grading and encapsulation program that Professional Coin Grading Service (www.PCGS.com) will soon be debuting in the United States.

PCGS is introducing grading for packs of 50 or 100 small-size US banknotes, enabling the protection of consecutive notes while keeping the pack intact. Courtesy of PCGS.

“This is not only one of the oldest-surviving intact packs of US banknotes to surface, but also the only pack of $500 notes believed to exist. It could be one of the rarest and most valuable banknote packs,” states PCGS President Stephanie Sabin . 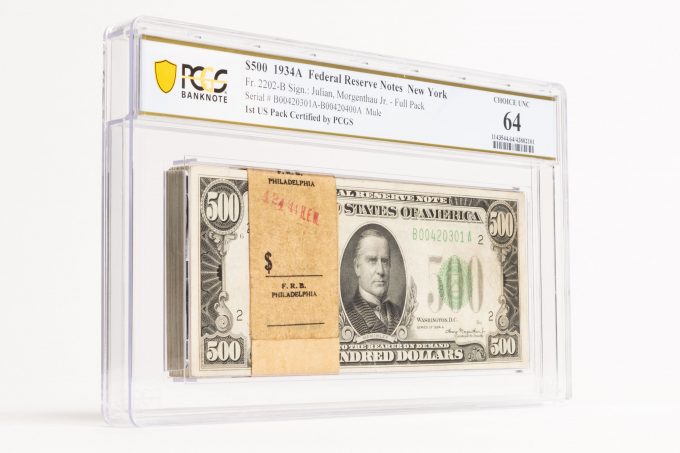 This Series 1934A $500 Federal Reserve Note pack marks the first United States pack encapsulation at PCGS and represents a crossover from an alternative grading service, which had previously held each note individually. The innovative PCGS pack holder keeps packs intact and secure. Courtesy of PCGS.

It was submitted by US Coins and Jewelry (https://uscoinsandjewelry.com/) in Houston, Texas, under a new PCGS service option that will provide for the encapsulation of full (100) and half (50) consecutive packs of small- size US banknotes, which are graded as a whole unit and provided a single grade based on the condition of the entire pack.

“We are excited to offer banknote pack grading, an innovative option for those who wish to keep packs of banknotes intact rather than split them apart and have the notes graded individually,” remarks Sabin. “The benefit of grading an entire pack of banknotes rather than individual notes has a lot to do with certain collectible characteristics that are unique to packs of banknotes, such as keeping together a run of notes with consecutive numbers, consecutive Star Notes, and the like . There are even cases where a pack of notes may be historical or collectible for other reasons, such as having an origin associated with a bank hoard, a notable collector, or other numismatically significant factors.”

“It is astounding that an original pack of 100 $500 notes with a combined face value of $50,000 survived since the Great Depression era. According to the US Treasury Department, the average annual salary in the United States in 1934 was less than $1,400. In 2022 dollars, that $50,000 pack would have been worth the equivalent of about $1 million when the notes were printed,” said Matthew Duncan, co-owner/general manager of US Coins and Jewelry. “We are delighted that these are the first banknotes certified as a pack by PCGS.”

The pack’s earlier pedigree includes the Taylor Family Collection, one of the world’s most valuable private collections of banknotes.

PCGS Banknote Manager Joseph Pielago explains, “Banknote pack grading opens up an entirely new world of opportunities for collectors who previously had to break up historic or numismatically significant banknote packs for the purpose of getting these pieces graded and encapsulated. Collectors can maximize the value and security of their banknote packs with our revolutionary holder and never again need to break apart valuable packs to do so.”

Submitting banknotes for PCGS pack grading will be easy and available for all PCGS Authorized Dealers and PCGS Collectors Club members. These innovative hard pack holders, available only for small-size United States banknote full packs and half packs, provide for the encapsulation of 50 or 100 consecutive notes, including Replacement Star Notes. No minimum number of packs will be required, and encapsulation of each pack will be $60 beyond fees for the service level chosen, in addition to shipping and handling costs. 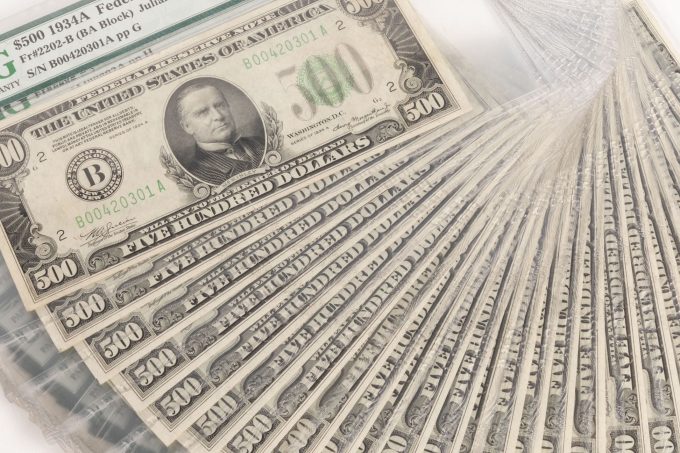 An alternative grading service had previously broken up this historic pack of $500 bills, but PCGS pack grading provides for the protection of these unique collectibles while keeping the consecutive notes intact in their original wrapper. Courtesy of PCGS.

While all notes in the pack will be examined by graders, a single grade will be granted as a composite for the entire pack and does not guarantee that any single given note within will grade at that level if it were submitted individually. More information and guidelines for submitting packs will be coming soon at www.PCGS.com.

Professional Coin Grading Service (PCGS) is a third-party coin and banknote grading company that was launched in 1986. Over 35 years, PCGS has examined and certified more than 48 million US and world coins, medals, and tokens with a combined value of over $47 billion. For more information about PCGS products and services, including how to submit your coins for authentication and grading, please visit www.PCGS.com or call PCGS Customer Service at (800) 447-8848.

Newer NGC, NCS, PMG and CGC Appoint The Bolaffi Auction Group to an Official Submission Center in Italy and Spain
Back to list
Older US Mint Produces Over 1.2 Billion Coins for Circulation in January