Paper Money Guaranty (PMG) is excited to announce a major milestone: 7 million banknotes certified. With this achievement, PMG maintains the title of being the largest and leading third-party certification service for collectible paper money worldwide.

In January 2020, PMG had the privilege of certifying more than 200 banknotes of D. Brent Pogue’s world-famous currency collection. His rarities include some of the finest examples of US currency, which can be viewed in this PMG gallery. The collection included 27 banknotes that each realized over $100,000 at a Stack’s Bowers auction. The top lot was an 1863 $100 Legal Tender graded PMG 65 Gem Uncirculated EPQ that realized $432,000. 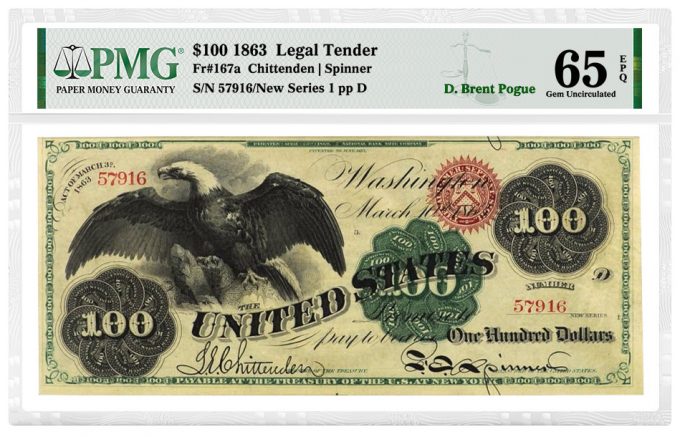 Because of PMG’s excellent reputation, auction houses regularly present PMG-certified notes, and their sale results reflect collectors’ trust in the expertise of PMG’s graders. The famous “Del Monte” error note made the news when it realized $396,000 at a Heritage Auctions sale in January 2021. After being certified through PMG’s CrossOver service, it sold for over 10 times the previous price of $25,000. 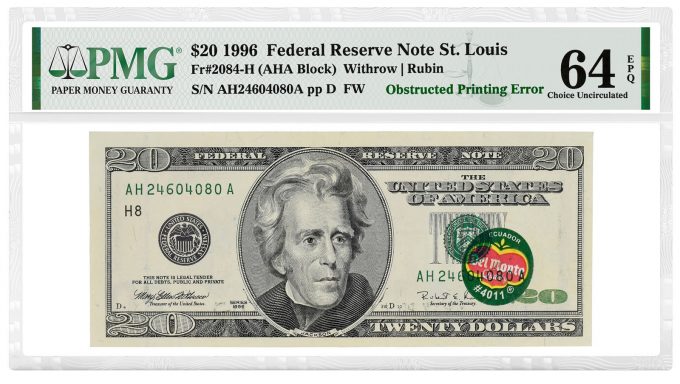 PMG’s popular CrossOver service enables notes encapsulated in PCGS-branded holders to be reviewed for PMG certification. Andrew Shiva recertified his entire collection of over 1,000 National Bank Notes with PMG. Possessing museum-like quality, these notes were issued between 1862 and 1935 and are some of the rarest examples to exist. The New York CH# 29 The First NB of the City of New York graded PMG 20 Very Fine, belonging to Shiva, is the only one out of the three known examples to be in private hands. 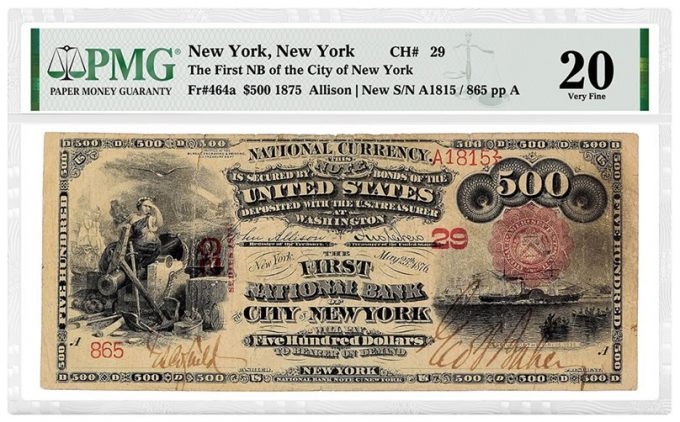 PMG certification is valued around the globe, with the majority of submissions to PMG being world banknotes. Recently, PMG-certified world banknotes have achieved amazing results at auction. For instance, a spectacular group of seven Zanzibar banknotes was recently certified by PMG. Altogether, the notes realized over $850,000 in a Spink sale in January 2022. 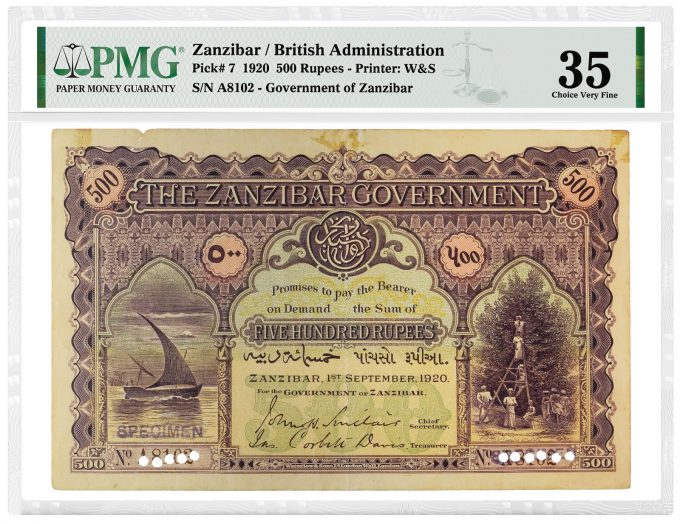 With over half of submissions from China, over 3 million Chinese banknotes have been certified and recorded in the PMG Population Report. Among them is a Hong Kong, Oriental Bank Corp. June 1, 1860 5 Dollars graded PMG 12 Fine, the earliest known issued banknote from Hong Kong. It realized £161,200 (about $220,000 USD) in an August 2021 sale presented by Dix Noonan Webb. 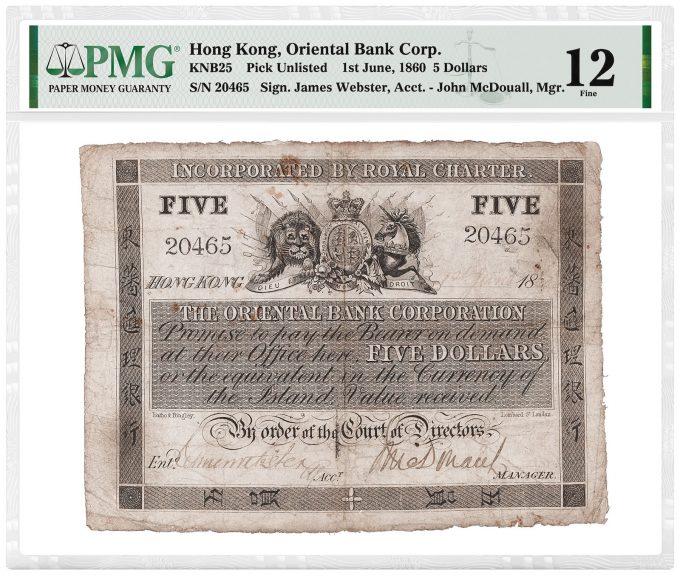 Several of the scarcest examples of paper currency in history have been authenticated through PMG. An elusive Hong Kong, Chartered Bank of India, Australia & China 1912 500 Dollars graded PMG 15 Choice Fine was featured in a January 2022 Spink sale, where it sold for HK$1.62 million (about $207,700 USD). This particular banknote has fewer than five examples known to exist. 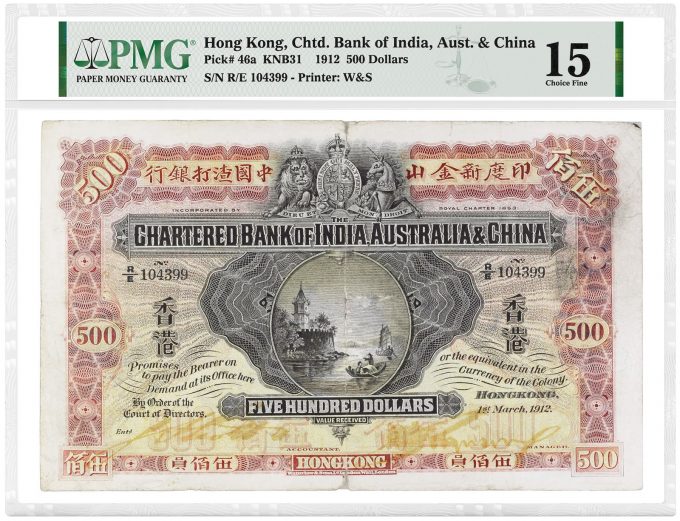 Another extreme rarity PMG had the privilege to certify was a banknote from Iraq, with only about six examples known. Part of a PMG-certified collection of 70 Iraqi banknotes, the Iraq, Government of Iraq 1931 (ND 1941) 1/2 Dinar graded PMG 25 Very Fine sold for $210,000 in an August 2021 Lyn Knight Auctions sale. 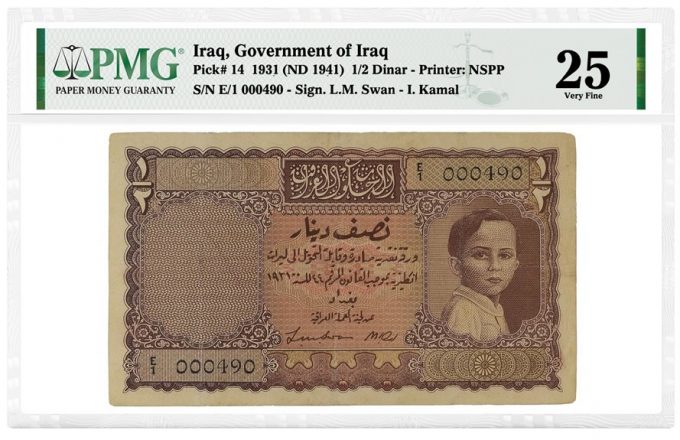 The PMG team is also experts on certifying “discovery” notes, which are paper currencies unidentified by today’s leading paper money authorities. In fact, several banknotes “lost” over time have been rediscovered through PMG’s multi-step certification process. Unknown to specialists for decades, an enigmatic note submitted to PMG was determined to be a scarce Venezuelan 1864 8 Reales = 1 Peso, printed during a turbulent period in the country’s history. 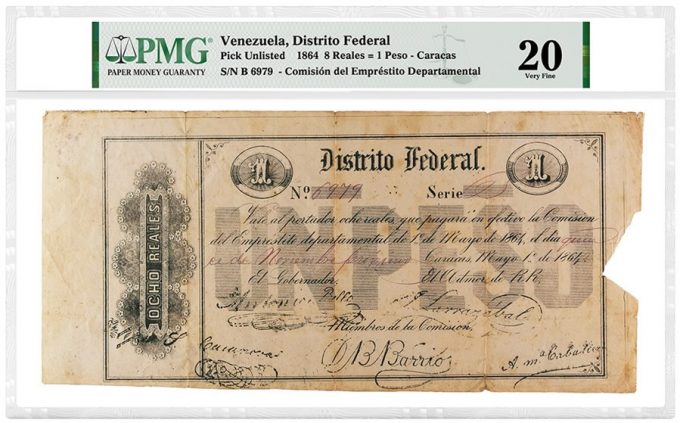 Connect with the PMG community

PMG continues to serve collectors worldwide by expanding its global network, providing exceptional expertise in authentication, grading and encapsulation. Other fascinating collections of banknotes certified by PMG can be viewed in the PMG Galleries. Learn how to sign up for the free monthly PMG eNews and follow PMG on social media at PMGnotes.com/connect.

The PMG Registry allows collectors to display their collections and compete against others for prizes. The PMG Registry now has over 87,000 notes and 16,700 sets. To become part of this free, growing global community for free, become a member. Join Today!

Founded in 2005, PMG is the world’s largest and most trusted third-party paper money grading service, with more than 7 million banknotes certified. PMG has established the industry’s highest standards of accuracy, consistency and integrity. Every note that PMG certifies is backed by the comprehensive PMG Guarantee of authenticity and grade, which gives buyers greater confidence. This results in higher prices realized and greater liquidity for PMG-certified notes. To learn more, visit PMGnotes.com.