The Perth Mint has released (4th April) new proof strikes in both gold and silver which mark the 70th year of accession of Queen Elizabeth II. Her remarkable reign began on the 6th February 1952 after the untimely death of her beloved father King George VI. A glorious coronation followed 16 months after the Queen’s accession, which was held in Westminster Abbey, the first royal event of its kind televised for the first time. On the 3rd February 1954, almost two years after her accession, Queen Elizabeth II was the first and, to date, the only reigning British monarch to visit Australia. When the 27-year-old monarch sailed into Sydney harbour, she practically stopped the nation whose people were mesmerized by meeting their Queen for the first time. Since then, Queen Elizabeth II has visited Australia a total of 16 times. Her last visit occurred in 2011 in which she was accompanied by her late husband, Prince Philip, Duke of Edinburgh, as she officiated at the Commonwealth Heads of Government Meeting in Perth. Admired as a symbol of strength and stability, and beloved by many people around the globe, she has become the first British and Australian monarch to celebrate 70 years on the throne. 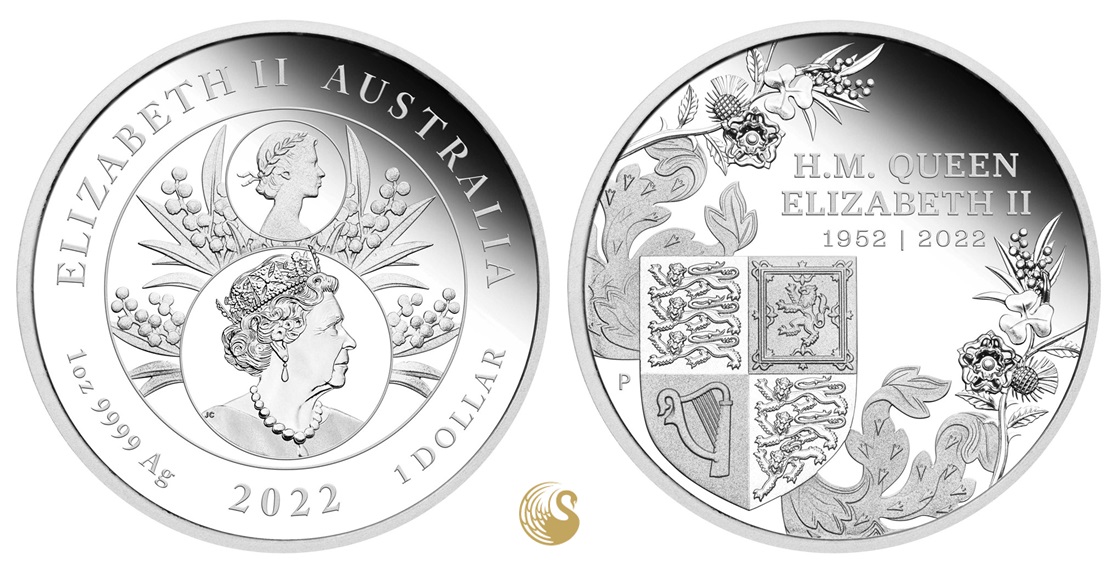 Designed by Natasha Muhl, the reverse side of both the gold and silver coins prominently depicts the shield of the Royal Coat of Arms together with an artistic interpretation of the mantle from the Royal Arms, originally a linen design element seen on the back of a medieval knight’s helmet. Also depicted is a symbolic flower stem combining the English rose, Irish shamrock, and Scottish thistle, alongside Australian wattle — the country’s national floral emblem — which is seen to the upper-left and lower-right of the shield. Included in the design is the inscription HM QUEEN ELIZABETH II 1952 | 2022, along with the Perth Mint’s ‘P’ mintmark. 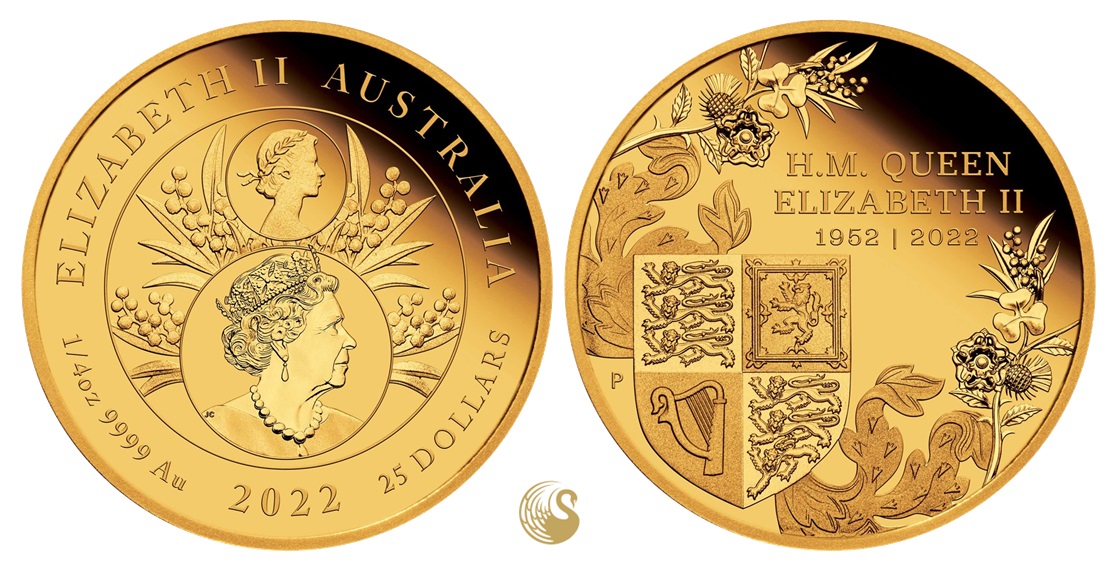 A special obverse depicts a fan of wattle which provides the background for Her Majesty’s first and current coin effigies. Introduced on Australian circulating coinage in 1953, Mary Gillick’s youthful likeness of the new Queen appears above the current Commonwealth effigy created by British artist and engraver Jody Clark. This is the sixth likeness to have been created and depicted on Australia’s coinage during her reign. Above the primary design is the text ELIZABETH II AUSTRALIA along with the coins’ fineness, metal, and weight as well as the face value placed below.

The silver proof coin is enclosed in a custom lucite container which also functions as a display case and is accompanied by a certificate of authenticity. Both the two-ounce and 1/4-ounce gold coin are housed in a classic display case with a hardwood lid and are accompanied by numbered c06ertificates of authenticity. For additional information about these collector coins, please visit the website of the Perth Mint for the gold coin here, and for the silver coin here.