The Perth Mint has released its latest silver bullion coins which are part of their ongoing “Next Generation” series, now in its fifth year. For 2022, the coins feature Australia’s own wild dog, the dingo. Other coins in the series have featured: 2021 the Platypus; 2020 the Kookaburra; 2019 the Crocodile, and 2018 the Koala.

Golden or reddish in colour, these canids can roam great distances, young dingoes can forage over an area of ​​60 kilometers and communicate with howls and barks to warn other packs of danger. Dingo packs live in grasslands and semi-arid land, including the edge of forests. They can also be found near rocky gorges and take shelter in hollow logs and caves. Curiously, a dingo can turn its head almost 360 degrees to track other animals such as birds in flight and use this capability to hunt mainly at night, targeting and killing large animals such as a kangaroo in a pack. Dingoes breed once a year and mate in autumn with the gestation being two months. The litter size can range from just one pup to 10, in some cases. Once born, the female can move her litter of pups individually in one night over an area of ​​up to nine kilometers to ensure their safety. Dingo pups venture from their underground den for the first time after about three weeks. Accompanied by their parents, they soon begin to explore further afield, learning how to navigate Australia’s unforgiving landscapes. Less reliant on their mother’s sustenance by two months old, they’re on their way to becoming Australia’s largest carnivorous indigenous mammals. 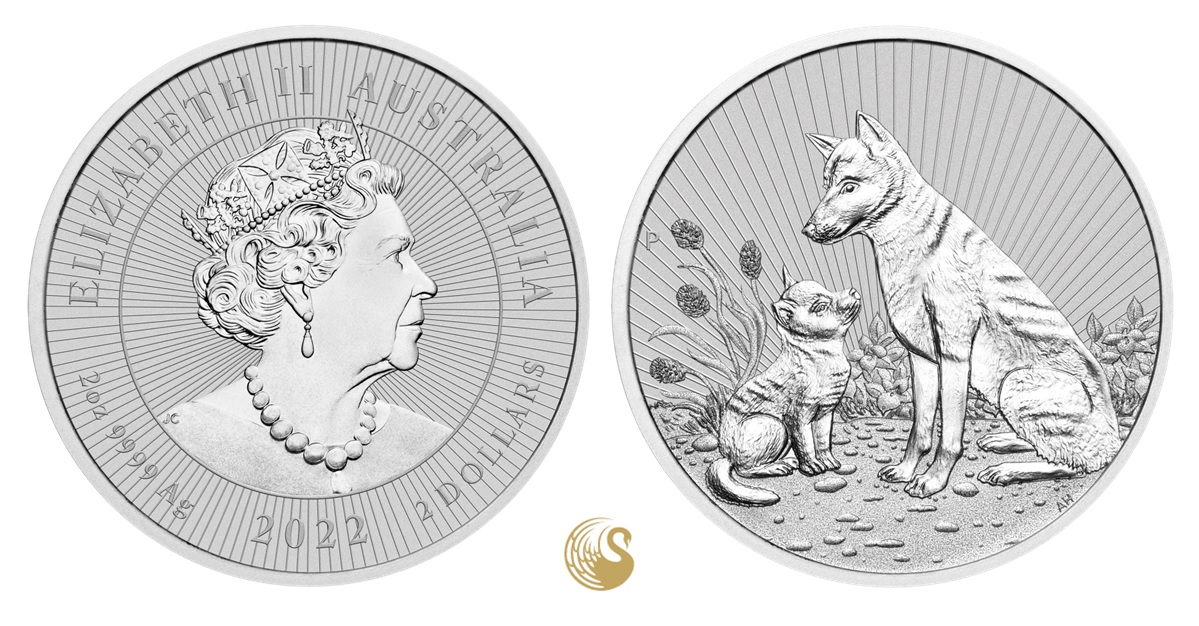 Designed by Perth Mint graphic artist Aleysha Howarth, the reverse side of the coin portrays a dingo sitting with its attentive pup amid wildflowers. The design includes a backdrop of radial lines and the Perth Mint’s “P” mintmark. Both the $2 and $10 denominations are minted as Piedfort strikes (double thickness). The obverse side includes the commonwealth effigy of HM Queen Elizabeth II, the denomination, and the year of issue 2022. The coins’ specifications are placed under the Queen’s likeness.

The $2 coins are individually encapsulated or, in purchases of 25 pieces, they are included in sealed tubes. The $10 10-ounce silver coin is presented in a protective acrylic capsule. For additional information, please contact Dillon Gage Metals in Dallas, Texas, which is the exclusive international distributor for the “Next Generation” series out of Australia. Their trading floor telephone number is 800-375-4653 Monday-Friday from 8:30 am to 5:00 pm Central Time. Please click here to visit their website.

Collectors or investors in Australia may contact the Perth Mint directly here.