This 1787 specimen of the Fugio Cent, a variety known as United Above, States Below, is highly sought-after among collectors and is part of a popular series that PCGS reclassifies as a regular issue. Courtesy of PCGS TrueView. Move the pointer to zoom.

(Santa Ana, California – January 3, 2022) – The Fugio cent was long one of the most popular early American collectibles, and now numismatists can count it as the earliest of any regularly issued United States Mint coin.

“The fugio cent is one of the most popular coins from the early federal period, so it is a big deal when new research sheds enough light to completely re-shape the understanding of the hobby of an iconic coin like this one,” says the president of the Professional Coin Grading Service Stephanie Sabin. “By officially recognizing the fugio cent as a regularly issued coin in circulation, based on the overwhelming evidence of our numismatic experts, we are helping to improve the understanding of the hobby of this important coin and its fundamental role in the early United States monetary system.”

PCGS Director of Numismatic Education and Grading Team Leader Steve Feltner is fascinated by the amount of information hidden under the surface of such extensively researched and collected coins as the Fugio cent. “Fugio cents, which have long been placed in the same colonial class as New Jersey copper, Nova Constellatio copper, and Massachusetts cents, are finally going to get the numismatic recognition they have deserved for nearly two and a half centuries!”

Feltner says the decision to reclassify the status of the Fugio Cent was not to be taken lightly. “When I was first approached about the idea, Fugio. to reclassify, C.oppers than Fugio Cent, I admit that I was skeptical. So much has been studied and written about her in the past that I couldn’t imagine anything justifying a change. “

He concludes: “I was wrong.”

Feltner adds, “The research and historical backing presented to me and my colleagues at PCGS has been irrefutable. Several times during the first read through I caught myself saying, ‘That makes sense’. It was an experience I will never forget. “ 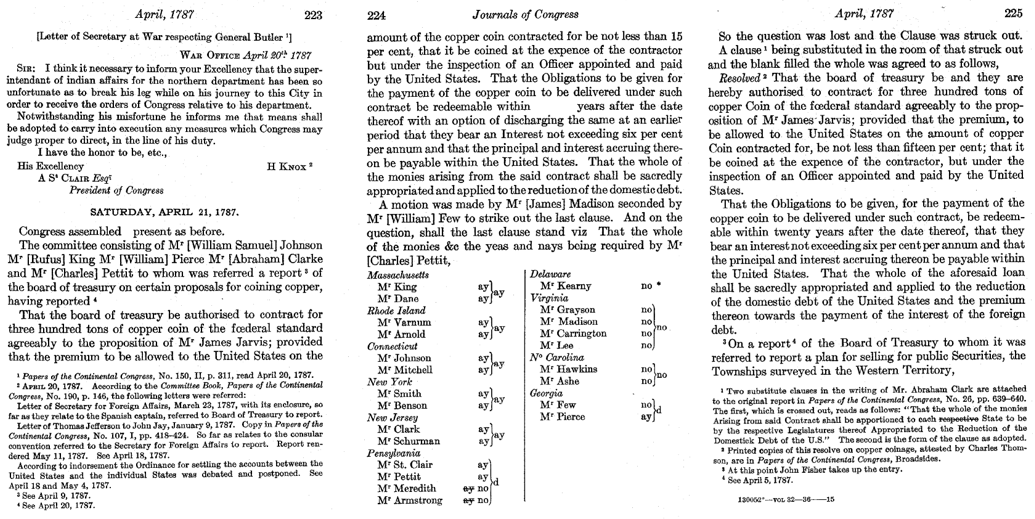 An excerpt from the journals of the Continental Congress of April 21, 1787. Public domain image.

Evidence to justify reclassification of the fugio cent as regular coin includes one by the Treasury Department on the 21st of the 1786 report on gold, silver, and copper coins of the United States. As part of these standards, cents should contain 157.5 grains of pure copper. When Congress approved the Fugio-Cents Treaty that day, the intent was to make coins that were needed in commerce.

The reclassification of the Fugio cent as a regular issue is not the first time PCGS has pioneered the correct identification of coins that may have been numismatically incorrectly categorized in the past. Years ago, PCGS was the first grading service to classify Half Dismes, which were once listed among the sample coins, as regular issues in 1792. A Guide Book of United States Coins (“The Red Book”) and others soon followed.

The reclassification of the Fugio Cent means that PCGS will list them under the heading “Federal Contract Coins” under the regular coinage and will retain their position under the PCGS Colonial Registry Sets. Read the January / February issue of the PCGS Rare Coin Market Report for the full story on why PCGS is re-classifying the Fugio cent as a regular issue. For more information on the PCGS Set Registry, please click here.

Via the professional coin grading service

Professional Coin Grading Service (PCGS) is a third-party company founded in 1986 for the grading of coins and banknotes. In 35 years, PCGS has more than 48 million US and world coins, medals and tokens with a total value of. examines and certifies over $ 47 billion. For more information on PCGS products and services, including submitting your coins for authentication and rating, please visit here or call PCGS Customer Service at (800) 447-8848.

Newer Questions and Answers: I found a rare Colombian half dollar in my grandfather’s estate. How much is it worth
Back to list
Older PCGS is reclassifying the Early American Fugio Cent as a regular issue