The Whitman Numismatic Journal was staffed by talents including RS Yeoman, Kenneth Bressett, and Neil Shafer. Hover to zoom.

RS Yeoman, creator of the hugely popular Guide Book of United States Coins (the hobby’s “Red Book”), what its editor-in-chief. His managing editor was Kenneth E. Bressett, who was several years into his employment with the company and immersed in every aspect of its publishing. Rounding out the journal’s inaugural staff were Neil Shafer as associate editor, and Ed Metzger as advertising manager. 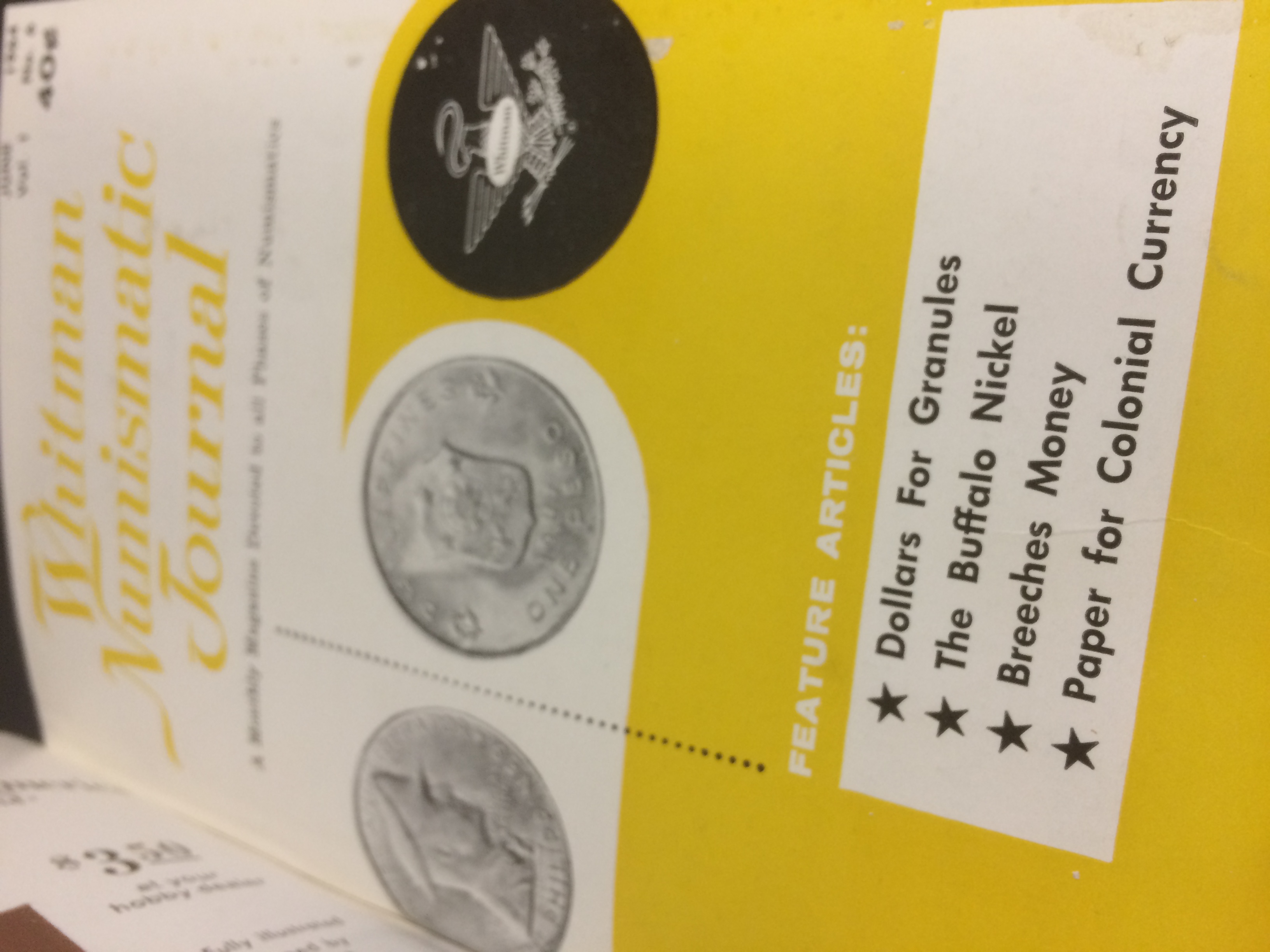 Whitman Numismatic Journal articles ran the gamut from US coin series to tokens and medals, modern world coins, paper currency, and everything in between.

In the first issue Yeoman answered the question, “Why Another Coin Periodical?” He noted the existence of “several fine weekly, bi-weekly, and monthly publications” that already kept collectors and dealers informed. For the Whitman Numismatic Journal, his goals included keeping hobbyists up to date on current coin values ​​and, for readers of the “Brown Book” (the Catalog of Modern World Coins), informing them of new coinage issues. He also intended to include “bulletins covering any changes, discoveries, date additions, and a multitude of other data which reflect the growth and momentum of this great hobby.”

When Yeoman mentioned “growth and momentum,” he knew what he was talking about. Public interest in coin collecting was through the roof in the early 1960s. In 1964, the Red Book would sell an astonishing 1.2 million copies.

To “lend variety and balance to our new magazine,” Yeoman said, “We will cover all phases of numismatics. At one time or another short article will appear covering coins of historic interest, medals, paper money, tokens, mint errors, or anything that we consider timely, significant, or just plain entertaining.” 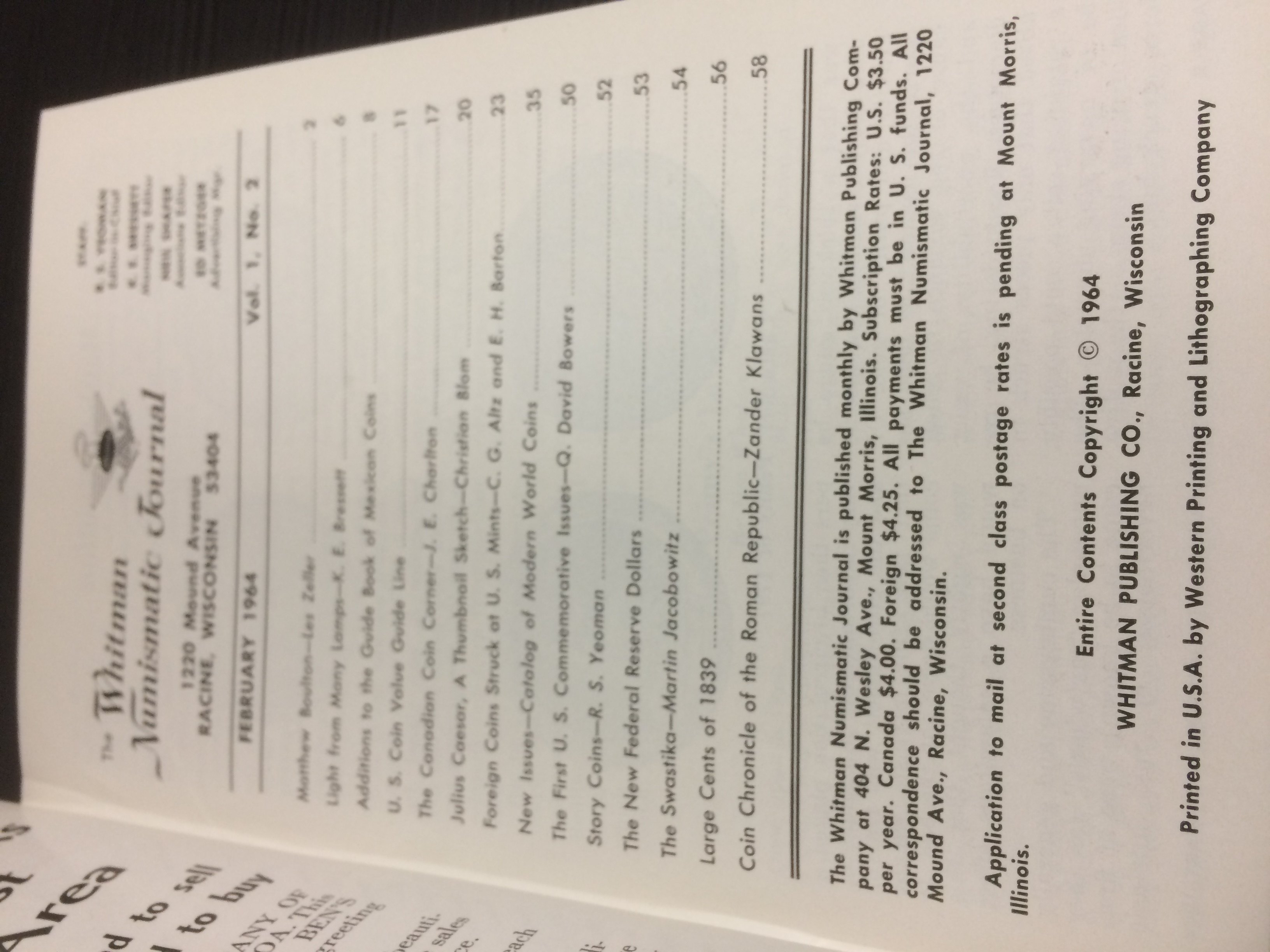 Yeoman noted that a year’s worth of the Journal would be the equivalent of several books’ worth of numismatic knowledge and entertainment.

He revealed that prominent numismatic authorities would be writing single-issue articles, as well as book-length manuscripts to be serialized. “It is safe to say,” the editor-in-chief predicted, “that a year’s accumulation of journals will total about three standard books.”

Other features would include book reviews, occasional world-currency exchange tables, mint reports of statistical and technical data, and letters to the editor.

“There will be no organization reports, news about robberies, or other sensational developments. We will have no classified ads, auction lists, coin investment plans, speculative offers in bags or rolls, or ads for altered, facsimile or fake numismatic specimens of any description”—thus Yeoman laid out what the magazine wouldn’t be. 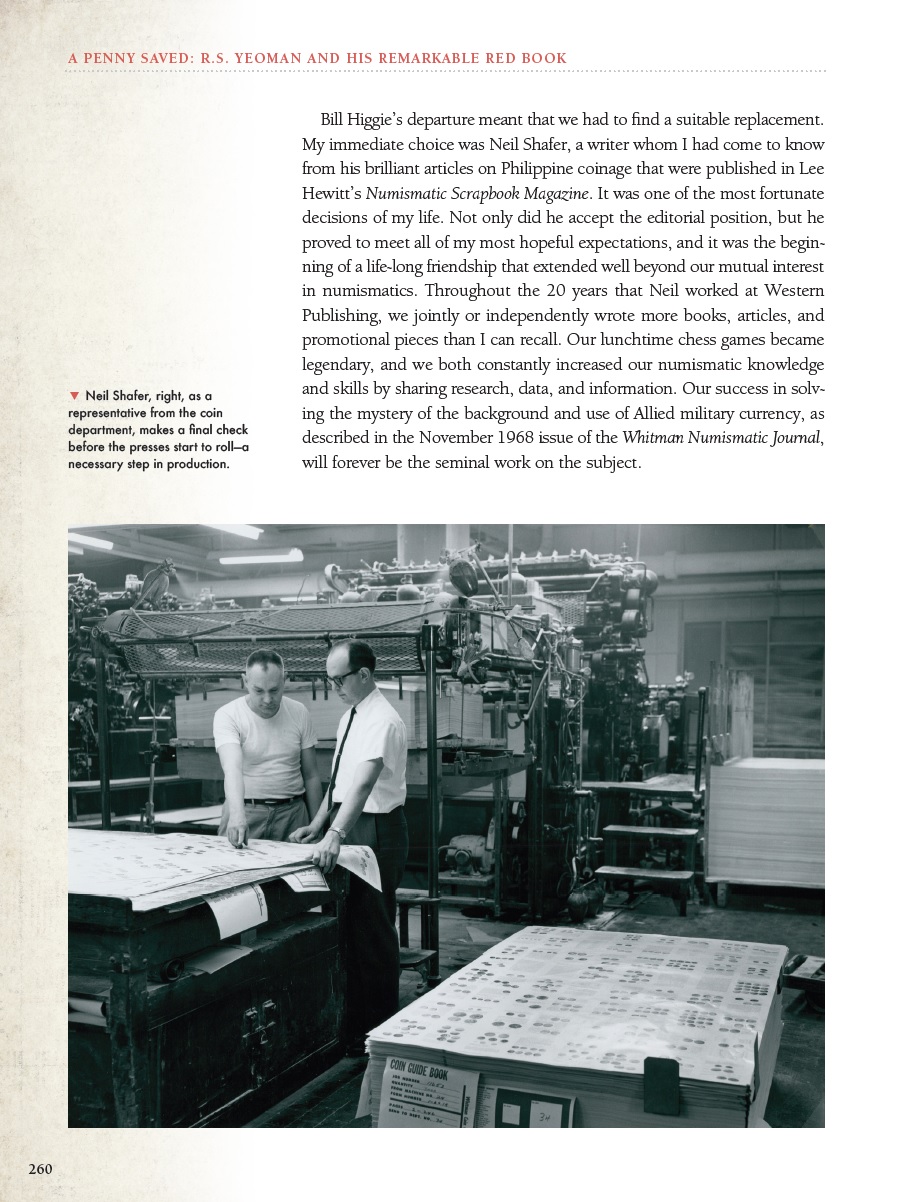 In his memoir A Penny Saved, Ken Bressett described working with Neil Shafer, Lawrence Block, Holland Wallace, and other writers and editors on the Whitman Numismatic Journal.

Ken Bressett, in his recent memoir, A Penny Saved: RS Yeoman and His Remarkable Red Book, reminisces about working on the Whitman Numismatic Journal, and the people involved. He remembers his “legendary” lunchtime chess games with Neil Shafer, and how they constantly shared numismatic research and ideas. 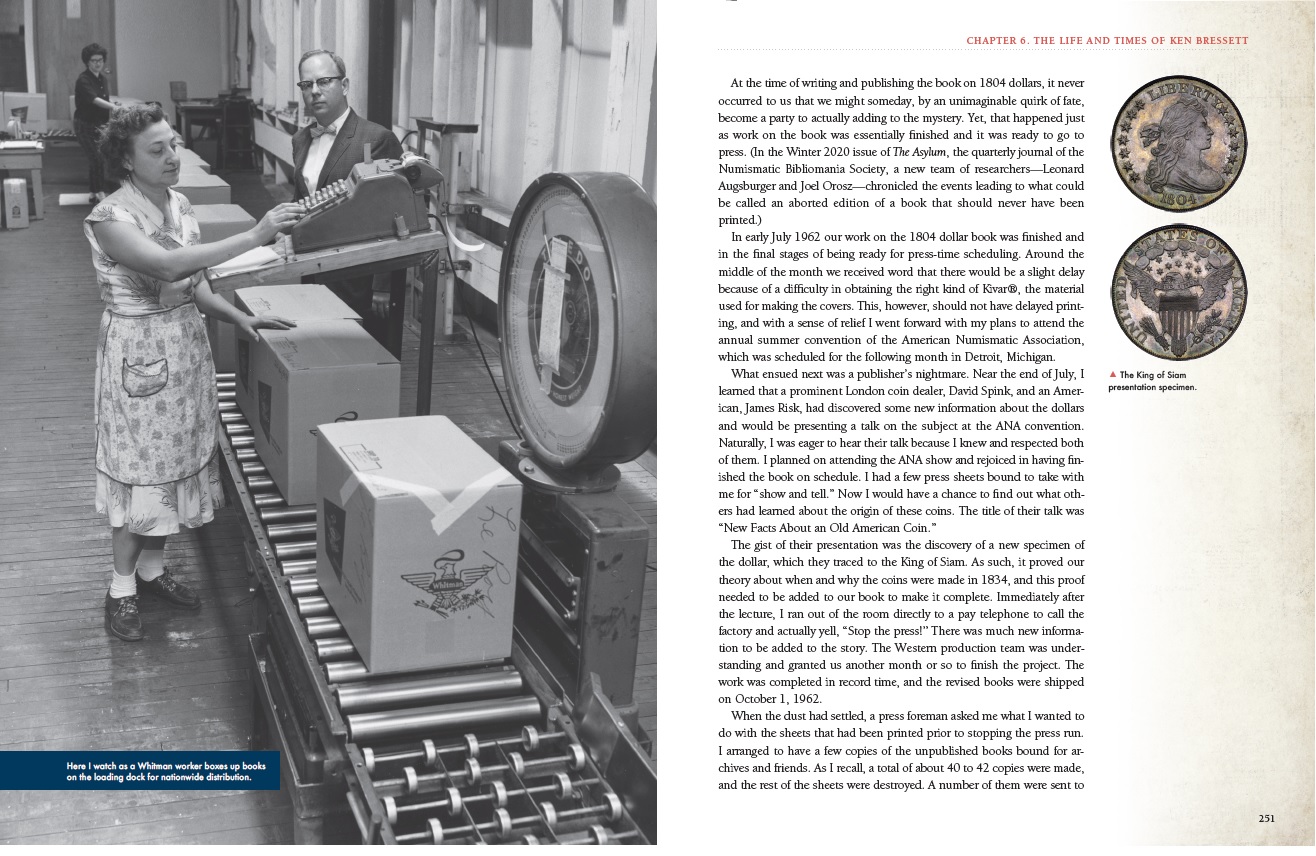 Bressett was involved in every aspect of Whitman Publishing’s numismatic projects, including management of the Whitman Numismatic Journal. (Pages 250 and 251 of A Penny Saved, courtesy of Whitman.)

With active researchers like Bressett and Shafer on the job, the Journal didn’t just report on the hobby. It broke ground with new information. In A Penny Saved, Bressett recalled an important collaboration with Shafer: “Our success in solving the mystery of the background and use of Allied military currency, as described in the November 1968 issue of the Whitman Numismatic Journal, will forever be the seminal work on the subject.”

To maintain the magazine’s schedule on top of ongoing books, folders, albums, and other product development, more help was needed. The Journal’s original editorial staff kept up the pace, Bressett remembers, “but only with the support of numerous friends and authors, plus the eventual addition of two other very skillful writers, Holland Wallace and Lawrence Block.”

Mystery fans, of course, know that Block later went on to pursue his career in freelance writing and became famous for his fictional crime stories. He would be named a Grand Master by the Mystery Writers of America in 1994. In Bressett’s A Penny Saved, Block contributed a fascinating reminiscence of his time as associate editor of the Whitman Numismatic Journal. His first piece for the magazine was “Raymond Chandler and the Brasher Doubloon.”

The Journal was published every month for a full five years. Its final issue came in December 1968. Packed in those five years are a wealth of numismatic knowledge and entertainment.

A casual scan of the magazine’s first year, 1964, turns up articles on modern English proof sets (by Q. David Bowers), various articles on Canadian coins (by Shafer and James E. Charlton), Zander Klawans’s research on ancient Greek and Roman coins, a biography of Matthew Boulton (by Les Zeller), a tribute to Thomas Jefferson, and news of the varieties. 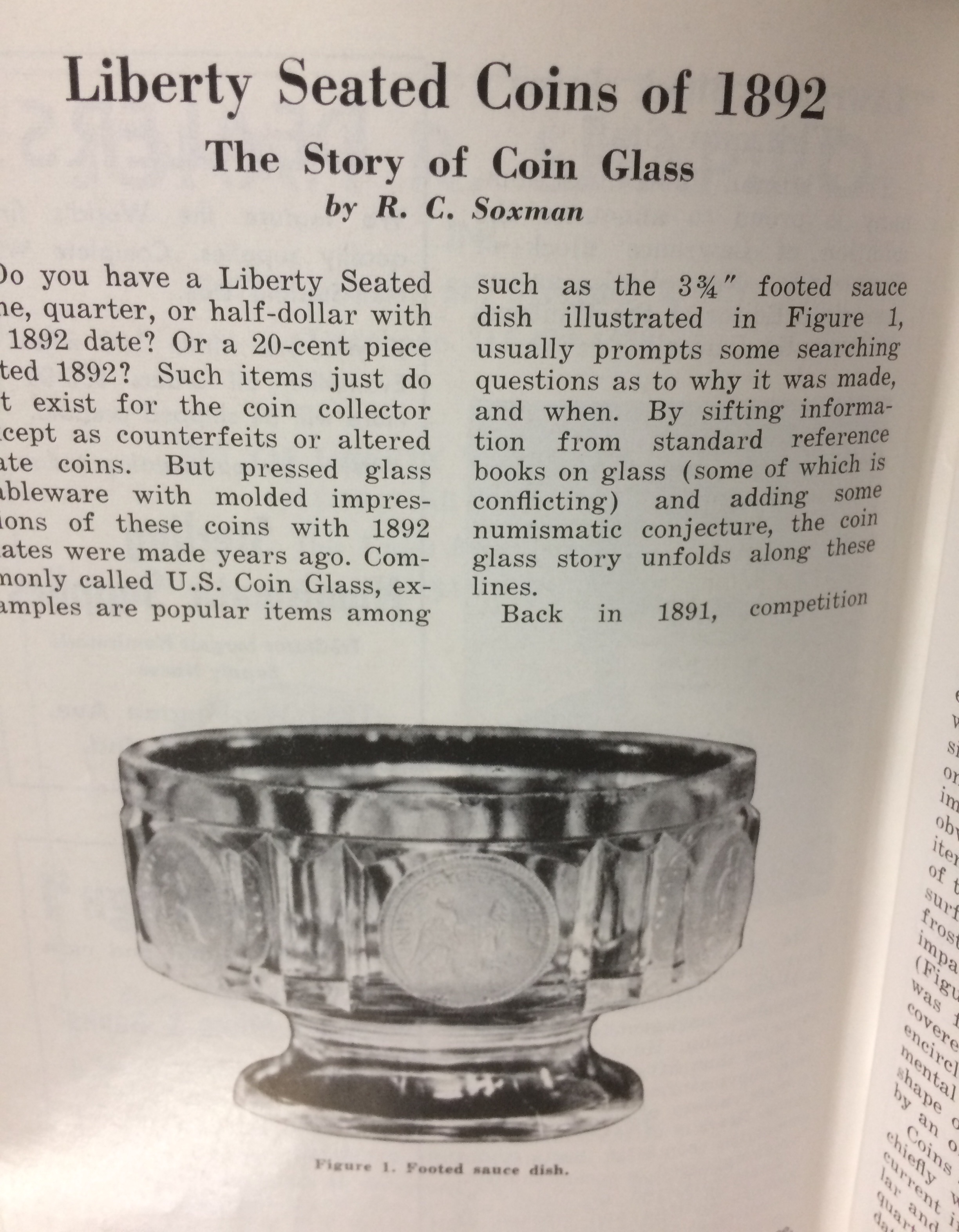 An article on Liberty Seated coin glass, by RC Soxman, from the October 1964 issue of the Whitman Numismatic Journal.

There were articles on the national economy and coin use, traveler’s checks, the 1804 dollar, the first coin collector, and politics and paper money.

And that was just the Journal’s first year!

Regular features would include “The Canadian Coin Corner” (by Charlton), Yeoman’s coverage of new issues and recent discoveries among world coins, “Foreign Coins Struck at United States Mints” (by Charles Altz and EH Barton), “Your Man at the Center of the World” (by Nick Parker, a Fellow of Britain’s Royal Numismatic Society), and “Story Coins” (by Yeoman).

One of my favorite humorous features is Ken Bressett’s “Captains Courageous,” a gag panel that used coins to tell jokes. Other light entertainments included numismatic poetry, and a “Dear Miss Matist” advice column.

The Whitman Numismatic Journal obtained contributions by the brilliant writers of the day—Dave Bowers, Don Taxay, Walter Breen, and many others—and shared works from earlier specialists such as C. Wyllys Betts and Howland Wood.

To enjoy this treasure trove of reading, look on eBay or other popular buy/sell/auction sites, or consult your favorite numismatic rare-book dealer. You can easily find individual monthly editions or an occasional accumulation. On a lucky day, you might even be able to buy a complete five-year collection.

Dennis Tucker has served the hobby community as publisher of Whitman Publishing since 2004. His column “Notes Published” covers books and publishing in general, with a special emphasis on antiques and collectibles. Whitman is the Official Supplier of the congressionally chartered American Numismatic Association. The firm produces many standard references relating to the art and science of numismatics (the study of coins and related objects). Numismatics is a field that touches on American financial and banking history, economics, artistry and design, technology, mining and metallurgy, political history, society, and culture.