The Katherine D. Ortega Collection offers a fascinating overview of US coinage in the 1980s.

Numismatic Guaranty Company (NGC) is pleased to announce that it has been selected to certify the US modern coin collection of Katherine Dávalos Ortega, the 38th United States Treasurer. The collection, made up of dozens of coins collected between 1983 and 1989 while Ortega served as treasurer, includes five certified numbered coins, American Silver and Gold Eagles, and a variety of commemorative editions. All coins in the collection achieved a grade of at least NGC MS-69 or NGC PF-69 Ultra Cameo. Each coin was marked with an NGC certification label that featured the family tree of Katherine D. Ortega.

Ortega was sworn in as US Treasurer in 1983. She oversaw a budget of $ 220 million, raised $ 40 million for the restoration of the Statue of Liberty, and helped transform the local currency to prevent counterfeiting. She also led efforts to have the West Point Bullion Depository designated as the official United States Mint.

Since leaving her position as treasurer in 1989, Ortega has served as a deputy to the United Nations General Assembly and in an advisory capacity to the National Park Service. 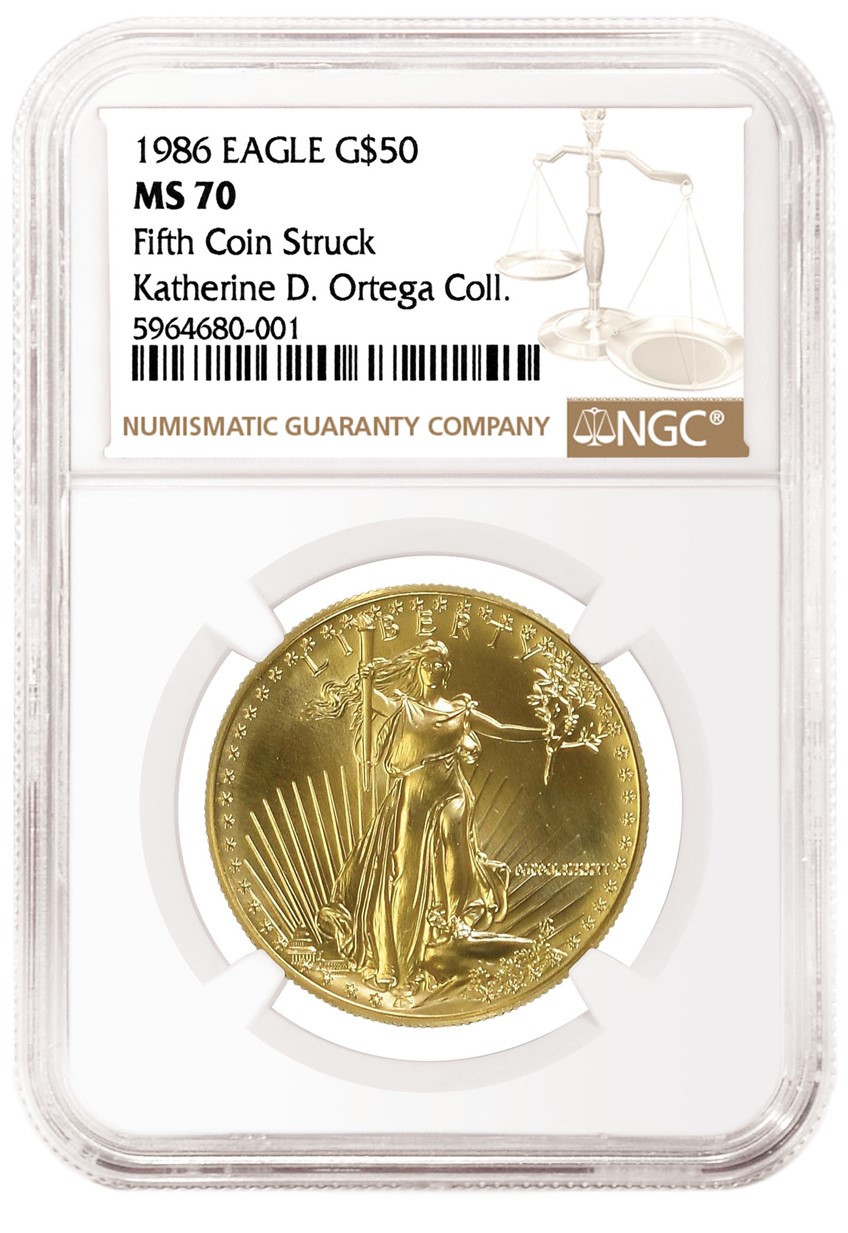 The Ortega Collection’s most intriguing coins include five NGC-certified numbered issues, including the fifth 1986 $ 50 Gold Eagle ever minted.

On September 8, 1986, Ortega attended a ceremony at the US Bullion Depository in West Point, NY, the day before the new American Eagle with one ounce officially began production, in which she personally minted her coin – the fifth of more than 20 Millions of uncirculated $ 50 gold eagles produced in the past 35 years.

“To be able to certify one of the first-place Gold Eagles in celebration of the 35th anniversary of the American Eagle program is especially rewarding,” said Mark Salzberg, senior grading finalizer at NGC.

Ortega attended similar ceremonies for striking the 1986 W Statue of Liberty in $ 5 gold; the bicentenary silver dollars of the 1987-P and 1987-W Constitution; and the silver dollar memorials from the 1988-D Olympic Games. All of these personally minted coins have been certified by NGC, which has graded more than one million U.S. commemorative coins.

In order to receive an individually numbered mint certificate, the minting of a coin must be attested and documented by an authorized NGC representative, or the coins must be accompanied by a copy of the official mint documentation, which individually identifies the order in which the coins were minted. Ortega’s coins were submitted with Official Certificates of Authenticity (COAs) from the US Mint.

Ortega said she entrusted her collection to NGC for its unparalleled commitment to accuracy, consistency, and integrity, which has made it the world’s largest and most trusted third-party valuation service for coins, tokens, and medals.

“We are honored to have been selected to certify this important collection of modern US coins by an extremely accomplished and influential figure in US history,” said Salzberg. “MS. Ortega’s decision shows the value the numismatic community finds in our services.”

Newer Carson City Rarities Highlight of Heritage’s US coin auction in November
Back to list
Older From the Colonel’s desk: “What Might Have Been” – Abraham Lincoln’s Kentucky Cent