Numismatic Guaranty Company (NGC) is proud to have certified more than 1,000 coins from the prestigious collection of John W. McCloskey, a renowned numismatist. Heritage Auctions is offering these coins in two auctions in early 2022, including the FUN US Coins Signature Auction, which will offer 136 NGC-certified highlights from the collection on January 7th.

The centerpiece of the collection is an 1870-CC Eagle rated NGC VF 25 (Lot 4438). This issue was struck in the year the Carson City Mint was founded and is one of the rarest of all gold issues at this Nevada facility, which ceased issuing coins in 1893. 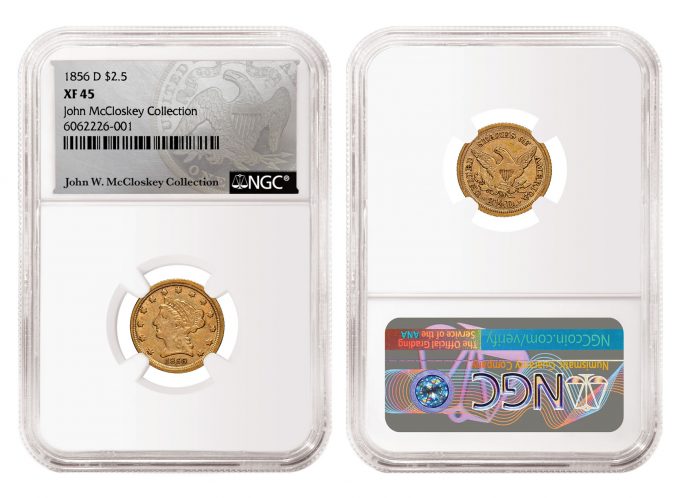 In addition to Carson City, sales include coins from five other US mints, including Philadelphia; New Orleans; Charlotte, North Carolina; San Francisco; and Dahlonega, Georgia. An 1856-D Quarter Eagle with NGC XF 45 (lot 4417) is another highlight of the auction. Only a few dozen examples of this key state in the Liberty Head series are believed to have survived. 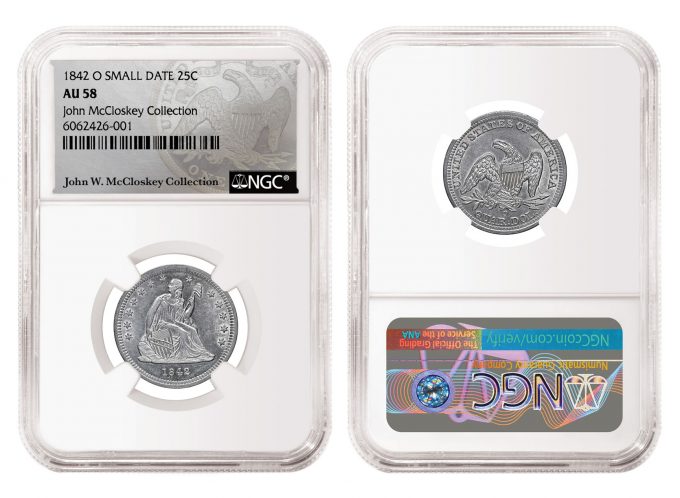 The top silver coin in the auction is an 1842-O Small Date Quarter with the rating NGC AU 58 (lot 4326). This is a major variation in the series; only 24 examples are listed in the NGC Census, and this particular coin is second best. The NGC Price Guide suggests that this coin should easily have five digits.

NGC presents these and other McCloskey Collection coins in a picture gallery on its website. To explore the gallery, go to NGCcoin.com/McCloskey.

McCloskey’s passion for seated coinage reportedly began in the 1950s when he began collecting and studying Liberty Seated Dimes in high school as a teenager. In 1973 he founded the Liberty Seated Collectors Club, which celebrates the rich legacy of American Liberty Seated silver coins. McCloskey was the club’s elected president and honorary editor of the Gobrecht Journal, the club’s magazine, for nearly four decades.

McCloskey co-authored several of the authoritative books on early US dimes, including Federal Half Dimes 1792-1837, published in 1998, and Early United States Dimes 1796-1837: A Reference Book of Their Types, Vareties and Rarity “. “, Which was published in 1984. He has also written more than 200 articles for the Gobrecht Journal.

“John McCloskey has generously shared his findings with the numismatic community,” said Mark Salzberg, chairman of NGC. “It was an honor for NGC to certify the coins from the McCloskey Collection, which he carefully put together with his numismatic know-how.”

Further NGC-certified highlights in the January sale are:

NGC is the world’s largest and most trusted third-party coin, token, and medal grading service with more than 52 million certified collectibles. Established in 1987, NGC provides an accurate, consistent, and impartial assessment of authenticity and quality. Every NGC certified coin is backed by NGC’s comprehensive guarantee of authenticity and quality, which gives buyers more confidence. This leads to higher realized prices and greater liquidity for NGC-certified coins. To learn more, visit NGCcoin.com.

Newer US Mint produced 1.1 billion coins for circulation in November
Back to list
Older Gold ends week on five-week high