The most famous “NE” Massachusetts Shilling, recently certified by the Numismatic Guaranty Company (NGC), is part of a Morton & Eden auction this month. Incredibly, the shilling and other early American rarities – including two 1,776 continental dollars – were recently discovered in a sweet tin in the UK. The bids for auction 113, which ends on November 26, 2021, are already running.

The Massachusetts Bay Colony minted the first coins in British America, initially with a design that included “NE” (for New England) on the obverse and a Roman numeral on the reverse. In this case, the shilling bears the number ‘XII’ to indicate that it is worth 12 pence, which is the equivalent of one shilling. To prevent forgery or clipping, the designs later became more elaborate, including trees and legends on the edge.

A northern England art consultant whose ancestors included William Wentworth, an early New England settler who started a prominent family, presented the coin after it was discovered in a collection of coins kept in a small metal container.

“There were several hundred coins in the old candy jar,” said Morton & Eden Coin Specialist James Morton. “The star of the collection is undoubtedly this remarkable New England shilling, whose simple appearance belies its exceptional historical significance and its excellent original condition.”

The discoveries also include two examples of the continental dollar from 1776. These enigmatic coins were minted in various metals, and numismatists now appreciate their connection to the newly independent United States. They show a sundial and the date 1776 on the front and the interlocking names of the American colonies on the back. 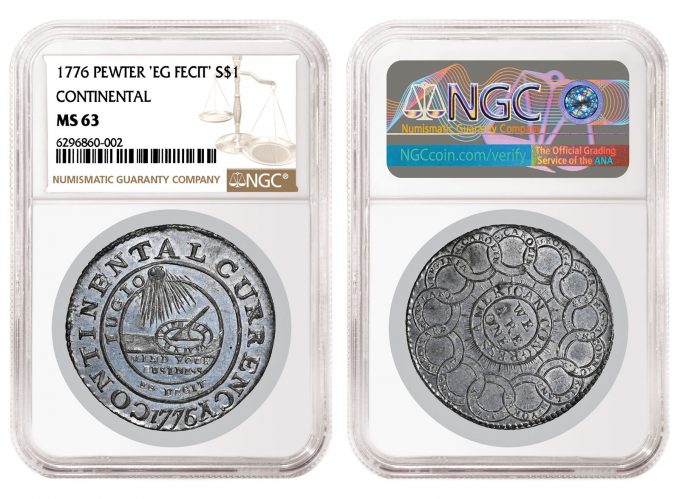 “Numismatics never seems to be full of surprises,” said Scott Schechter, NGC chief numismatist. “Having been certified by NGC’s expert assessment team, I am confident that the only known Mint State ‘NE’ Shilling will make an impressive debut.”

The other NGC-certified rarities from the can are:

All auction house estimates. All dollar amounts are in US dollars.

NGC is the world’s largest and most trusted third-party coin, token and medal grading service with more than 51 million certified collectibles. Established in 1987, NGC provides an accurate, consistent, and impartial assessment of authenticity and quality. Every NGC certified coin is backed by NGC’s comprehensive guarantee of authenticity and quality, which gives buyers more confidence. This leads to higher realized prices and greater liquidity for NGC-certified coins. To learn more, visit NGCcoin.com.