The top lot was a Great Britain 1839 Una and the Lion 5 Sovereign graded NGC PF 62+ Cameo (lot 339), which realized CHF 480,000 (about $478,000). The obverse of the coin shows the young Queen Victoria, while the reverse displays a figure representing her guiding a lion, a symbol of England. The scene is inspired by one involving Lady Una in Edmund Spenser’s epic poem “The Faerie Queene.”

Meanwhile, an England 1658 Gold Pattern Half Crown graded NGC PF 63 Cameo (lot 124) realized CHF 312,000 (about $311,000). Only six examples are known of this off-metal strike, according to the auction house. The coin shows Oliver Cromwell, whose death in September 1658 was the beginning of the end of the Commonwealth of England, a period of just over a decade when the monarchy was abolished. 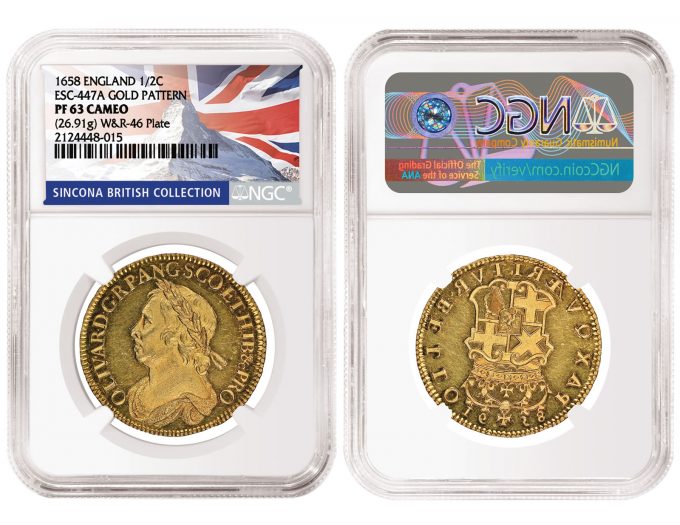 Another top offering in the sale was a Great Britain 1768 Gold Pattern 2 Guinea graded NGC PF 65★ Cameo (lot 243). From early in the reign of King George III, this coin was one of only a tiny number struck; These were never intended for wide usage because smaller gold denominations were desperately needed at the time. This coin realized CHF 264,000 (about $263,000). 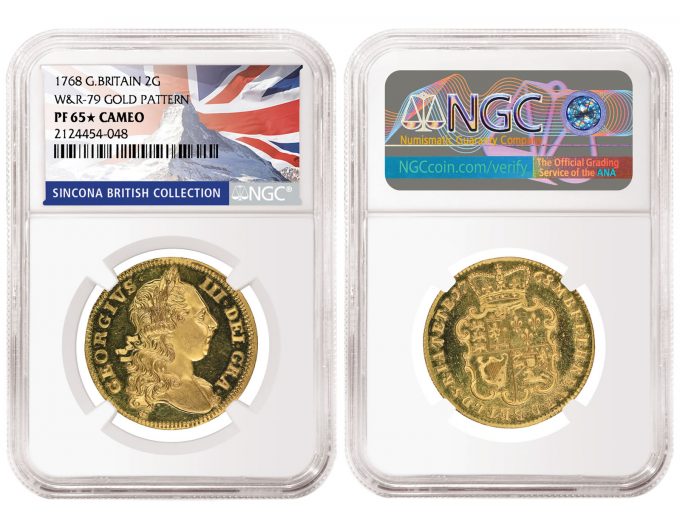 NGC is showcasing high-resolution images of the coins that have been offered so far from this unparalleled collection in an image gallery on its website. In addition to the coins from the Part 2 auction, the gallery also includes the coins from Part 1, which realized CHF 8.3 million (about $8.9 million) in November 2021. To explore the gallery, click here.

To enhance these stunning coins, NGC encapsulated them with a special label that combines the British flag and the Matterhorn, a Swiss mountain that represents the highest level of achievement. SINCONA, which is headquartered in Zurich, will present additional auctions of selections from this collection, including one in the fall of 2022.

Other NGC-certified highlights in the auction include:

Prices realized include buyer’s premium. All dollar amounts are US Dollars.

Newer US Mint Produces Over 1.27 Billion Coins for Circulation in April
Back to list
Older Perth Mint Silver Bullion Sales Accelerate in April