Prominent professional numismatist Michael “Miles” Standish has announced that the fourth edition will soon be released of the award-winning reference book he co-authored with former United States Mint Chief Engraver John Mercanti, “American Silver Eagles: A Guide to the US Bullion Coin program.”

“First struck in 1986, the American Silver Eagles have become the most popular bullion coins in the history of the United States. The new edition of the book will include more information about these important coins as well as many additional illustrations since the last edition was published in 2016,” explained Standish. “The fourth edition is expected to be released in mid-March by Whitman Publishing.” 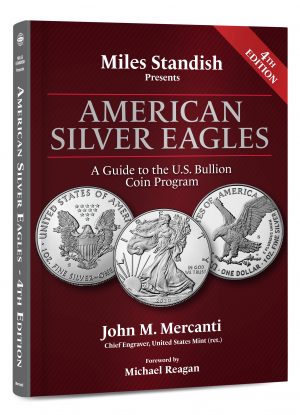 A portion of the book’s profits will be donated to the Standish Foundation for Children (https://standishfoundation.org) in Austin, Texas. Founded in 2010 by Standish’s wife, Andy Mangione Standish, a Certified Child Life Specialist, the Foundation is a nonprofit organization that works with healthcare providers in the United States and other countries to provide tools and training to minimize healthcare-related pain and suffering in children .

Exclusive autographed copies of the updated “American Silver Eagles” books, hand-signed by the authors Standish and Mercanti, will be available for $50 each including shipping. For additional information, contact Standish by email at MJStandish@aol.com.

He also has signed an agreement with Numismatic Guaranty Company (www.NGCcoin.com) to be included in NGC’s Signature Labels program that features encapsulation insert labels hand-signed by famous hobby figures. Standish was an executive of NGC from 2015 to December 2021.

He previously was an authenticator and grader at the former American Numismatic Association Certification Service and served as an executive at Professional Coin Grading Service (www.PCGS.com), and Professional Sports Authenticator (www.PSAcard.com).

A native of Kalamazoo, Michigan, Standish began buying and selling coins at the age of 17 while still in high school. In 2019, he established a $250,000 trust fund to benefit education and sports programs at Portage Central High School in Michigan where he played varsity football and graduated in 1983. He also donated an eight-foot bronze statue of a mustang horse, a symbol of the school’s mascot name, the Mighty Mustangs.