The US Coins auction at the January FUN US Coins Signature® Auction soared to $65,422,650 in total sales, part of the combined $74 million for the event. The record-setting event brought new auction records for 88 of 211 lots that changed hands for $50,000 or more.

“The new year started with an extraordinary result at the FUN Auctions, a reflection of the strong demand for elite coins,” Heritage Auctions President Greg Rohan said. “This auction is a fitting sequel, stocked with rarities that continue to train the spotlight for top US coin collectors on Heritage Auctions.”

Among the highlights at the Long Beach Auction:

A 1795 Eagle, BD-5, R.5, MS61 NGC is from the first year in which the United States Mint struck gold coins – half eagles were struck first, followed by a delivery of 1,097 Capped Bust Right eagles from Warrant 39. This remarkable coin represents the 13 leaves BD-5 variety, the last variety struck and this die pair was probably used to strike 500-1,000 examples of the reported mintage. It is from an extant population of just 35-45 pieces. 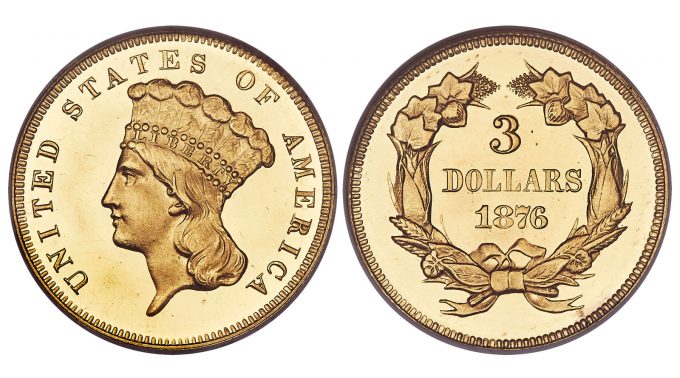 Like the 1895 Morgan dollar, the 1876 Three Dollar PR65 Ultra Cameo NGC. JD-1, High R.5 is only available in proof format. But the 1876 three is compared most often to the 1875 three dollar, another proof-only date. The 1876 is not as rare as the preceding year — a distinction clouded by the difference between an official mintage, reportedly just 45 pieces, with 20 proofs delivered in February and 25 more in June, and speculation of a larger actual mintage. This coin is clearly an original striking, most likely one of the 20 proofs delivered in February. 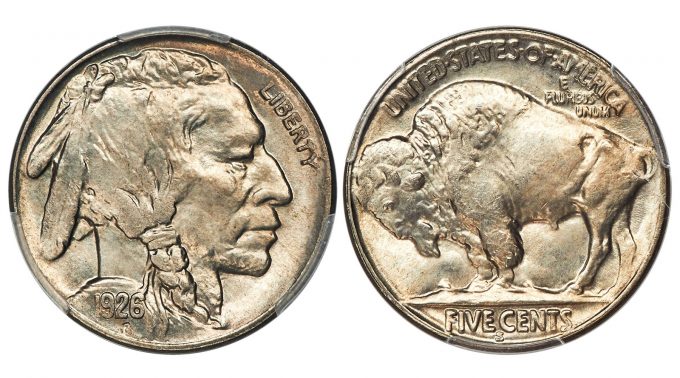 A 1926-S Nickel MS65 PCGS. CAC is from the only issue in the Buffalo Nickel series with a mintage below 1 million (970,000) pieces. That mintage directly translates to scarcity in high grade compared to most other issues. Aside from Guide Book varieties such as the 1918/7-D, 1916 doubled die, etc., the 1926-S is the preeminent key date in the series in Gem condition. PCGS reports only 18 coins in this grade (four of which are Plus graded), with none finer; the NGC Census records 12 Gems, with four MS66 coins finer (1/22). None of the MS66 NGC coins are CAC approved. The last Gem PCGS coin in this grade offered through Heritage Auctions was a CAC-approved example in the 2018 FUN Signature auction that realized $99,000. 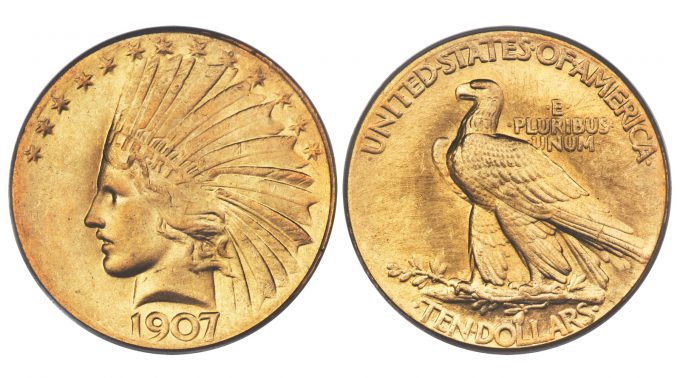 Sculptor Augustus Saint-Gaudens sometimes reused his artistic ideas in multiple commissions. The head of Liberty on the 1907 Wire Rim Eagle MS65 PCGS is a direct descendent of the allegorical female figure from the Victory on the Sherman Monument. The second generation of the Victory, a small-sized reduction of the head only, is actually based on an earlier, unused study for the head. This is the famous NIKE-EIPHNH (Victory-Peace) bust that was cast between 1892 and 1903. By turning the head of Victory in profile and placing it in a circle, it became his figure for Liberty on the ten dollar gold piece. President Theodore Roosevelt made the most significant design modification when he suggested the sculptor replace the laurel wreath with an Indian warbonnet. This example is one of just 72 in 65 (8 in 65+), and there are but 29 finer. 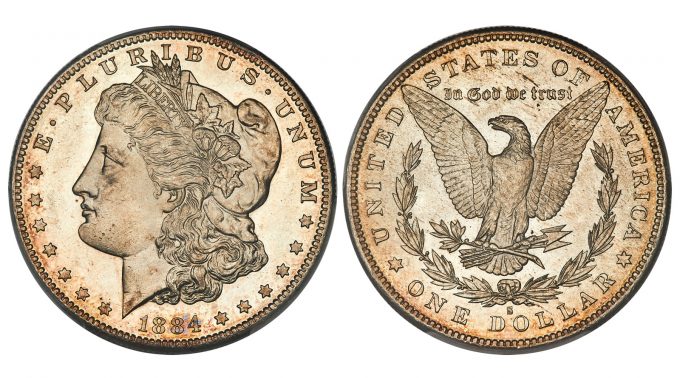 The San Francisco Mint produced 3.2 million business-strike dollars in 1884, most of which made it into circulation. Circulated examples are fairly common, even in Extremely Fine and About Uncirculated grades; most of those held in government storage likely were melted in 1918, under the provisions of the Pittman Act. Most NGC and PCGS Mint State examples are in the MS60 and MS63 range; the 1884-S Dollar MS64+ PCGS offered in this auction is one of just 25 examples certified between the two services. 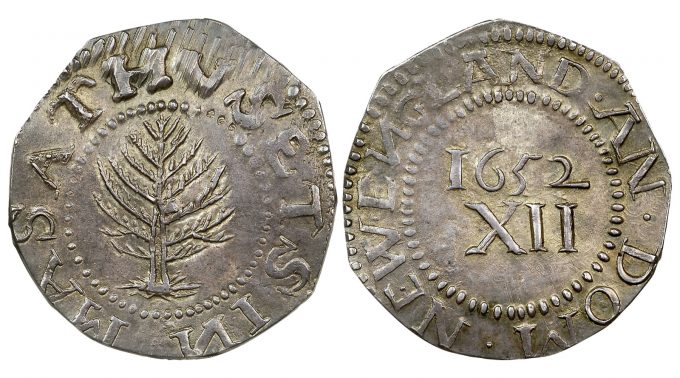 Once a part of the collections of both Reed Hawn and Donald G. Partrick, a 1652 Pine Tree Shilling, Large Planchet, Reversed N, MS65 NGC CAC. Noe-10, W-750, Salmon 8-Diii, R.3 is a beautiful Gem example that was described in the Hawn catalog as “a wonderful specimen, one of the finest known.” It realized the second-highest price from the Reed Hawn Collection of Massachusetts silver, behind only the very rare Noe 2-B Willow Tree shilling. The Noe-10 Pine Tree shilling is frequently found in circulated grades, but it is rare in choice uncirculated. This piece, on the census as the reversed “N” type, is tied for finest known with three other examples — each of the Noe-4 variety. This is the finest Noe-10 known by Heritage Auctions experts. 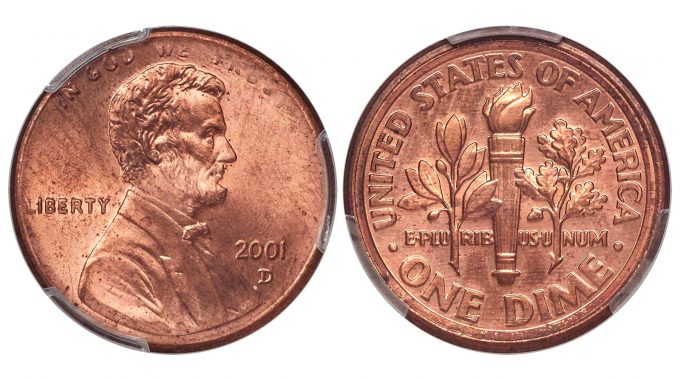 One of the unique coins in the auction is a 2001-D Lincoln Cent — Muled With a Roosevelt Dime Reverse — MS65 Red PCGS. A mule is a coin struck from mismatched dies. In the lengthy history of the United States Mint, only a few dozen mules are known, and most are unique. Of all mule possibilities in US numismatics, the most likely to occur is the Lincoln cent / Roosevelt dime mule, largely because the diameters for the cent (19 mm) and dime (18 mm) are similar, and each type is from a high mintage . Heritage Auctions experts know of five such pieces; the example offered here is the second known 2001-D cent / dime mule. 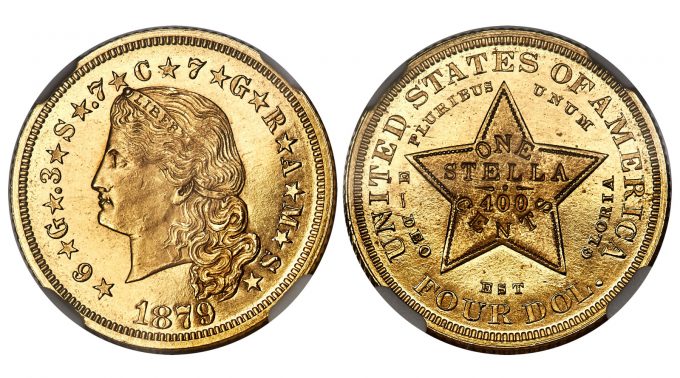 dr William Wheeler Hubbell, a patent lawyer out of Philadelphia, devised a system of metric goloid coinage that was pushed through Congress by House Committee on Coinage, Weights, and Measure chairman and Representative Alexander H. Stephens, once Vice President of the CSA. Together, they pulled enough strings to have 425 of the 1879 Flowing Hair stellas struck. Stellas originally were minted as a coin exchangeable with five European currencies; two varieties were created: one with coiled hair and one with flowing hair, such as the extraordinary 1879 Flowing Hair Stella, Judd-1635, Pollock-1833, JD-1, R.3, PR65 NGC that appears in this auction. 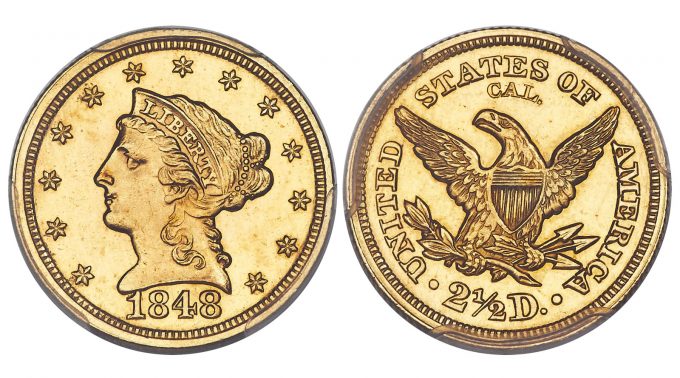 An 1848 Quarter Eagle CAL. MS62 PCGS is from the first delivery of gold from the California to the Philadelphia Mint, where it was coined into quarter eagles. The identifying mark, “CAL.,” was punched into the reverse after each piece was struck, and today, some numismatic students consider these coins to be America’s first commemorative coins. Few of the 1,389 coins produced with the special countermark survive today, and most that do survive show signs of circulation. PCGS and NGC have certified 123 examples in all grades, including just 46 submissions graded MS60 or finer.

Other highlights include, but are not limited to:

The sale features several private collections, including The Long Island Collection, Part II, an assemblage that made its debut at the 2021 ANA World’s Fair of Money in Chicago. Part II of the collection is equally impressive, with 184 lots – 54 in the Premier Session and another 130 distributed throughout Session Two and Sunday’s online Session Three. Early Federal gold, silver and copper issues are prominent throughout the collection, all in popular collector grades suitable for all interests. This collection represents only a portion of the consignor’s rare coin holdings. 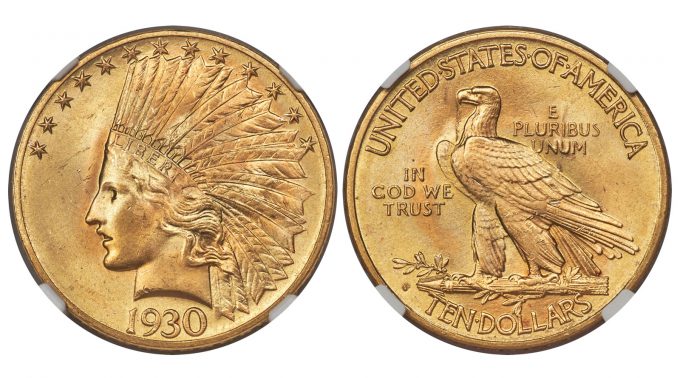 Among the highlights from the Long Island Collection is a 1930-S Eagle MS64 NGC. While no Indian Head eagles were struck from 1917 to 1919, then from 1921 to 1925, and again from 1927 to 1929, mintages were generally in the six figures. But the Indian Head eagle series had its share of low-mintage issues, including the 1930-S. With just 96,000 coins struck, its production ranks as the seventh-lowest in the series. This San Francisco issue stands as the second-rarest regular issue in the set. A small number were available from the Treasury department as late as 1932, but it is believed that few were distributed during the depths of the Great Depression, and that 150-200 pieces survived, mostly in uncirculated condition.

The Reverend Rock Collection was put together by a Northeast collector who said he has come a long way from the days of polishing Wheat cents at his grandfather’s kitchen table, and we can confirm he soon learned the importance of condition and originality! As his collecting interests became more refined, he focused on certified coins in higher grades, building a US type set that far outranks his earlier purchases.

The Girard Collection is built around numerous Carson City issues from the 1870s and 1880s. A few interesting outliers were added, including a 1907 Saint-Gaudens High Relief Wire Rim double eagle in sharp MS62 PCGS grade, a near-Mint State 1805 BD-2 half eagle and a three dollar gold piece certified MS62 PCGS. An additional 18 lots are in the Premier Session, all Carson City coins – mostly silver issues, but some CC gold, too. The half dollars stood out, with Choice XF 1870-CC and 1871-CC halves, and an 1878-CC half dollar certified MS61 NGC.

For images and information about all lots in the auction, visit HA.com/1342.