Heritage to Offer Gold Ingots from “Ship of Gold”

Who among us hasn’t dreamed of recovering sunken treasure? Read one story about exploring uncharted waters and recovering the treasures hidden below, and the idea inevitably comes to mind.

Imagine how life would change …

For some, the notion of recovering sunken treasure is brief and fleeting; for others, it can become an all-encompassing passion that lasts a lifetime.

Bidders in Heritage Auctions’ Central States US Coins Signature® Auction May 4-9 can make that dream a reality when two gold ingots, thought to be lost forever with the 1857 sinking of the SS Central America, are offered.

Three days after leaving Panama, the ship encountered a Category 2 hurricane; crew and passengers battled the storm for two days. When the skies cleared, the vessel remained afloat, but had endured significant damage. It took on massive amounts of water, flooding the hull, wetting the coal, shutting down the steam engines and sealing the fate of the ship … along with the fate of 425 lives and the ship’s glimmering cargo, which included an estimated $1.2 million in gold .

So significant was the loss of the SS Central America that news of its sinking deepened the Financial Panic of 1857, a recession that financially crippled the nation through the start of the Civil War.

More than a century later, in 1988, the recovery of the gold was organized by ocean engineer Tommy Thompson, whose crew spent the next four summers recovering roughly two tons of the lost gold. (In 2014, a different recovery team retrieved an additional 3,100 gold coins.) Included in the first haul: a spectacular Justh & Hunter Gold Ingot, weighing in at 464.65 ounces. Also included in the first recovery effort was a Henry Hentsch Gold Ingot that tips the scale at 238.84 ounces. 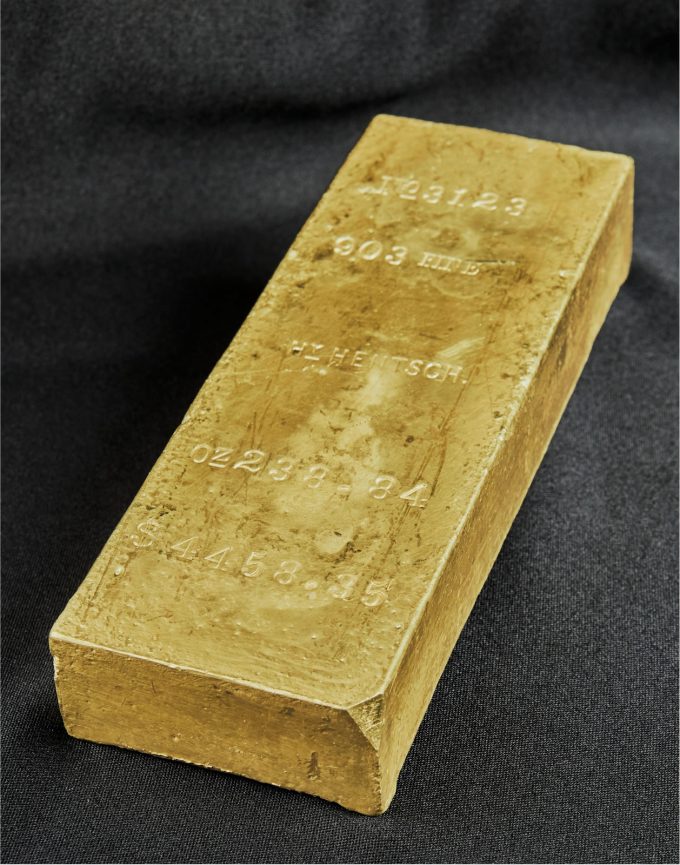 Both will be offered in Heritage Auctions’ Central States sale.

“The Justh & Hunter is one of just 87 ingots recovered, and the Hentsch ingot is one of just 33 retrieved during two separate recovery efforts. These are beautiful gold bars, but the desire and the value far exceed just the gold used to make them ,” Heritage Auctions Chief Numismatics Cataloger Mark Van Winkle said.

There were five assayers represented on the SS Central America. The recovery of several hundred gold ingots and several thousand gold coins is an unprecedented event in US numismatics — items have been recovered from other ships over the last 30 years, but none was as significant as that retrieved from the SS Central America, an effort that was particularly important to numismatics and to the study of the California Gold Rush.

The firm of Justh & Hunter opened an office in Marysville, California, because of the town’s proximity to the gold fields. Marysville is just 41 miles from Sacramento and the American River, a hotspot that included the main digging grounds for prospectors during the Gold Rush. San Francisco was more than twice as far — 87 miles, to be exact. Given the difficulty of traveling uneven roads in the 1850s, the distance to each was not an insignificant detail.

Only 27 ingots were recovered from the Marysville branch of Justh & Hunter — the spectacular example offered in this sale is the largest.

The Justh & Hunter ingot is a magnificent specimen, with bright yellow-gold surfaces, as would be expected or an ingot of .912 fineness. Identifying Marysville imprints — NO.9521 / a pair of J&H hallmarks / .464.65 OZS. 912 FINE / $8759.90 — appear on the top. In addition, as is common on Marysville ingots, two corners from which assay chips were cut feature small J&H stamps.

The collectibility of the Hentsch ingot rivals that of the Justh & Hunter. The ingot offered here is the second-largest Hentsch ingot known from a total of only 33 Hentsch ingots from both recoveries.

“Thousands of ingots from various assayers were poured in the 1850s, but they were melted more than 150 years ago,” Van Winkle said. “The only examples that were not melted were those that went down on the SS Central America, making the bars in this auction something of a time capsule. This is an extraordinary opportunity for the winning bidders.”

Images and information about all lots in the sale can be found at HA.com/1344.

Newer Using coins to study the context of ancient history
Back to list
Older Niue: New gold and silver one-ounce collector coins released featuring the Man of Steel himself, Superman