The Regent Collection, one of the finest selections of early Australian gold ever assembled, will bring collectors from around the globe to Heritage Auctions May 5-7 for its Central States World Coins & Ancient Coins Platinum Session and Signature® Auction.

“The Regent Collection represents the finest group of Australian rarities to come to market in years, if not ever,” Heritage Auctions Executive Vice President of International Numismatics Cristiano Bierrenbach said. “This group represents the cross-section of high-end collectors of Australia, British Commonwealth Sovereigns and World Gold Trophy Hunters, so we anticipate serious bidding activity on them.”

Among the top attractions is the finest of just six known examples of the George V gold Sovereign 1920-S MS64+ NGC ($400,000-500,000), which is widely acknowledged as the “King” of the Australian Sovereign series. This magnificent specimen is from an issue that initially was underappreciated as a rarity, due to its mintage of 360,180 — all from 1920-dated dies and struck between January and June 1920. Most dates before and after WWI included mintage of more than 1 million coins across Sydney, Melbourne and Perth; wartime needs boosted those numbers to nearly 4 million in 1918. Most of the 1920-S Sovereign’s original mintage was melted, along with 105 million other Sovereigns in the late 1920s and early 1930s in the US and England. It was suggested that the small handful of surviving examples was commissioned by prominent Sydney citizen Jacob Garrard from the Mint for distribution to his seven children to celebrate his Golden Wedding Anniversary, but contemporary documentation records no formal order from Garrard, meaning he likely obtained them from the Commonwealth Bank to which the Sydney Mint delivered newly struck Sovereigns during the 1920s. Therefore, the 1920-S represents what is perhaps the paramount rarity of the regular circulation Sovereign series, rather than a private order. This particular representative was held by Garrard’s descendants for the last 100-plus years, and represents a fresh addition to the known census not previously available for public auction.

What is believed to be the only known example in private hands of a Victoria gold Proof Pattern Sovereign 1853-SYDNEY PR63 Ultra Cameo NGC (estimate: $300,000-500,000) is a prize within the Australian series. The “Sydney Mint” Pattern Sovereign of 1853 is the first Sovereign for the colony; the example offered here is one of just four originally produced. 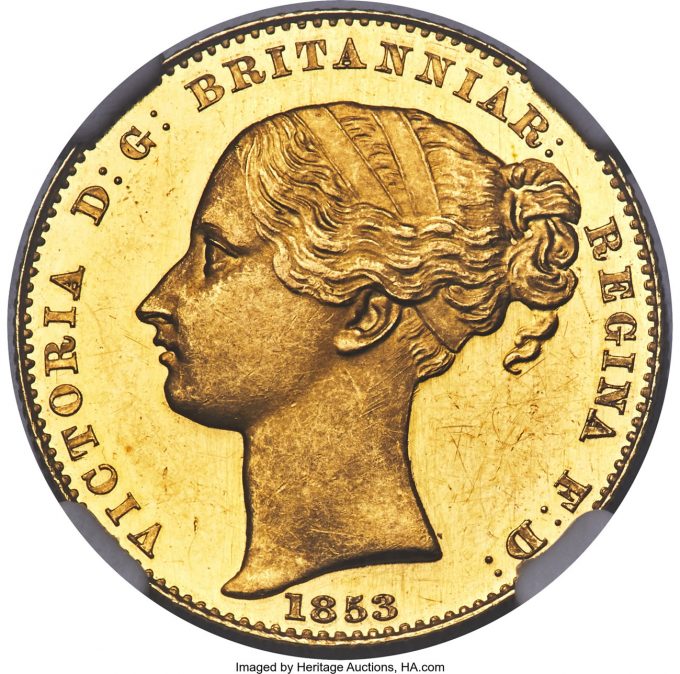 All other specimens of the coin are permanently impounded in museum collections – one in the British Museum and the other two in the Royal Mint Museum in Wales. There are none in Australian institutions, and this date was absent from the famed Murdoch Collection for both the Sovereign and 1/2 Sovereign. The specimen offered here has been off the market for more than 12 years.

A Victoria gold Proof Pattern Sovereign 1856-SYDNEY PR65★ Ultra Cameo NGC, the finer of just two examples in private hands and one of only three known, is regarded as a masterpiece of Victorian coin engraving and elevates Leonard Charles Wyon to the same level as his famous father, William.

One other example resides in the British Museum, and the other privately held specimen, a PR62 Ultra Cameo, pales by comparison to the example offered in this auction, which previously has been part of such revered collections as Murdoch, Farouk and Quartermaster.

A magnificent Victoria gold Proof “Una and the Lion” 5 Pounds 1839 PR62 Ultra Cameo NGC (estimate: $150,000-200,000). This extraordinary coin is prized by collectors of British numismatics, becoming one of the most fervently and consistently contested series in recent memory. The crowning artistic achievement of master engraver William Wyon at the height of his career — a monumental proclamation when considering his other masterworks, each impressive in their own right, including the “Gothic” Crown and “Three Graces.” 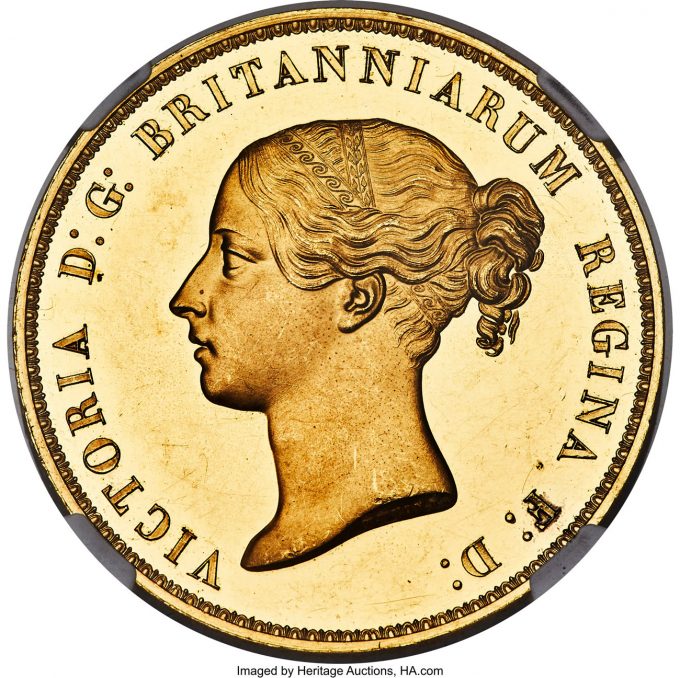 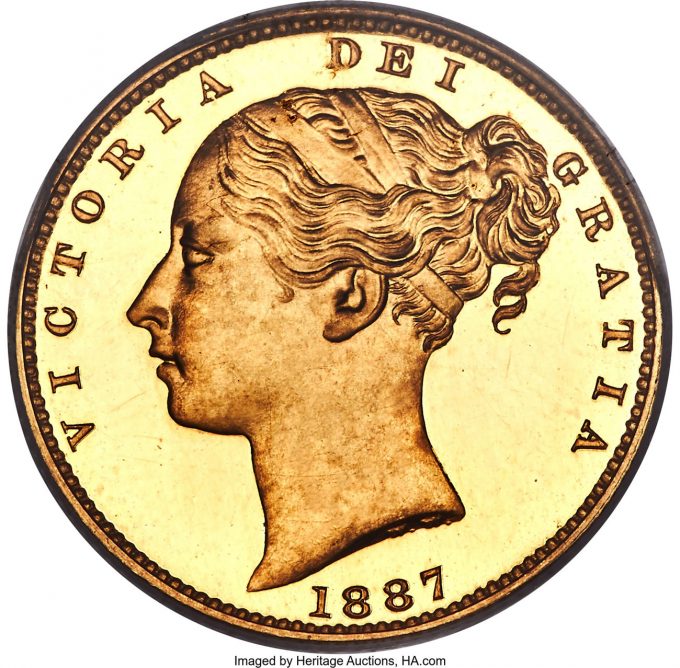 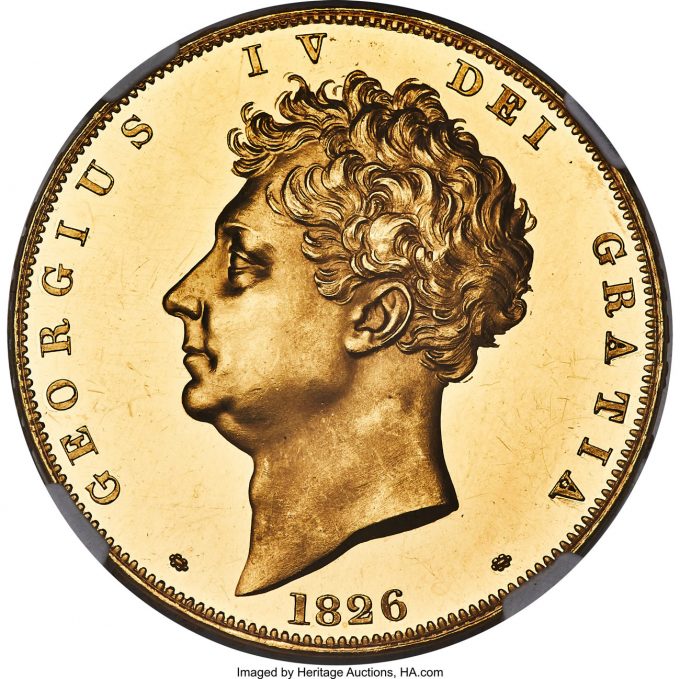 The auction also showcases 42 lots from the WTR Collection, an exceptional assemblage of Greek and Roman coins with particular strength in Lydian issues of Croesus, including Staters, Trites, Hectes, and Hemihectes. Highlights from the collection include, but are not limited to:

A CALABRIA. tarentum. Time of Pyrrhus of Epirus (ca. 280-272 BC). AV stater (18mm, 8.57 gm, 5h). NGC MS 5/5 – 4/5, Fine Style (estimate: $80,000-120,000). An iconic gold issue employing Fine Style dies displaying a fully struck profile of Heracles donning his signature lion skin headdress and almost never encountered this fine; struck during a tumultuous time at the end of Pyrrhic’s reign during an era of conquest in Calabria, likely for the purpose of paying his army during occupation. 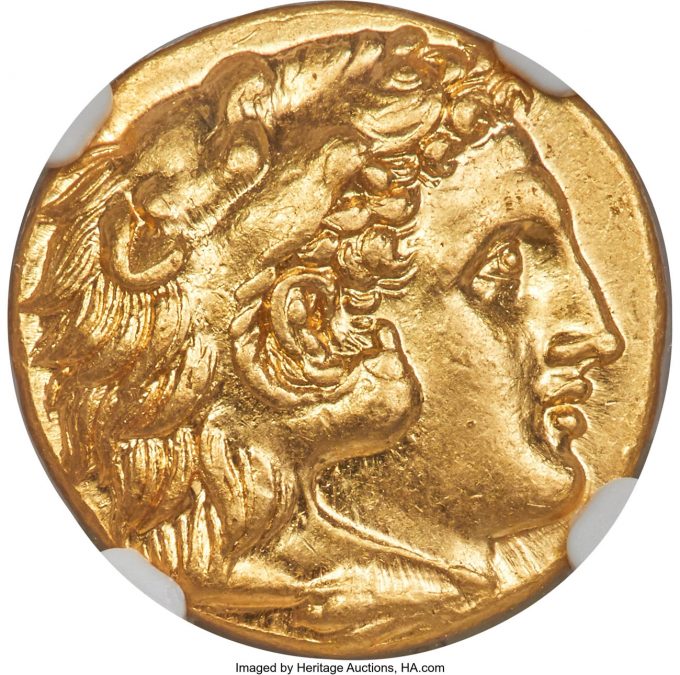 A Septimius Severus (AD 193-211). AV aureus (20mm, 7.22gm, 5h). NGC MS 5/5 – 5/5, Fine Style (estimate: $15,000-25,000). Yet another wonderful example and clear product of meticulously engraved Fine Style dies, coupled with advanced strike and surface ratings and eye-appeal to boot. After an extensive program of construction in Rome, Septimius Severus became commonly referred to as the “RESTITVTOR-VRBIS” or “Restorer of the City” as proclaimed in the legends of this issue. 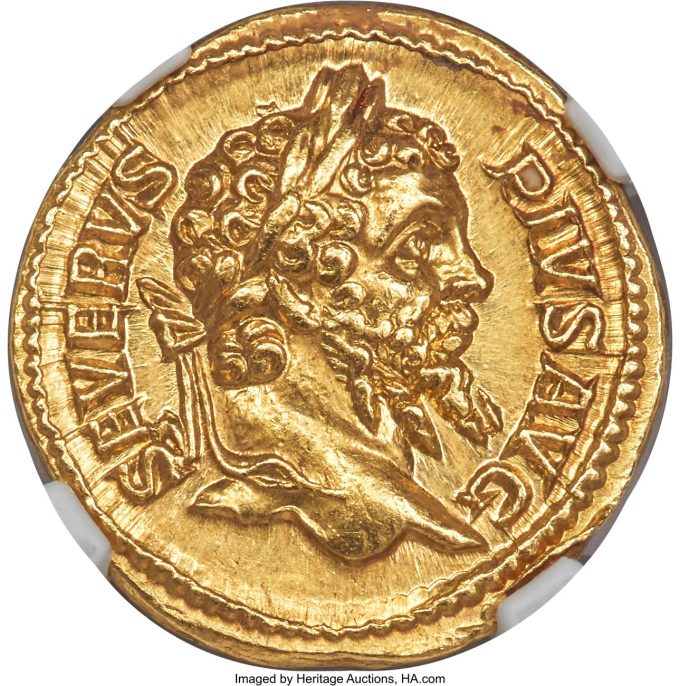 To ACHAEMENID PERSIA. Darius I-Xerxes I (late 6th-early 5th centuries BC). AV daric (16mm, 8.30gm). NGC MS★ 5/5 – 4/5 (estimate: $15,000-20,000). A rare early Daric of Archaemid Persia, an issue generally not encountered surpassing AU designation, only a handful of which are awarded the coveted “star” designation, making for a highly unusual and sought-after specimen. 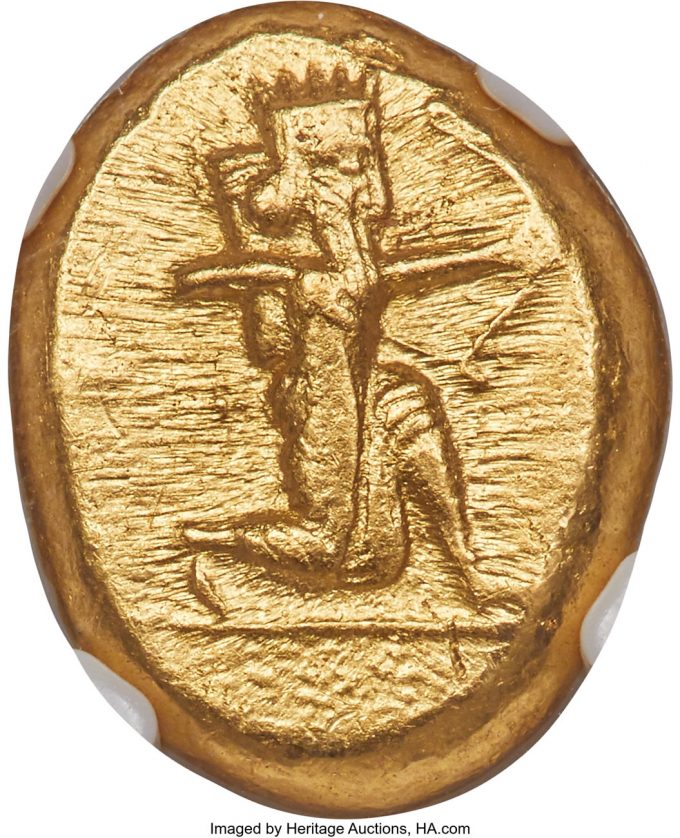 The auction features 43 lots from the perennial favorite Macedonian Kingdom, including: 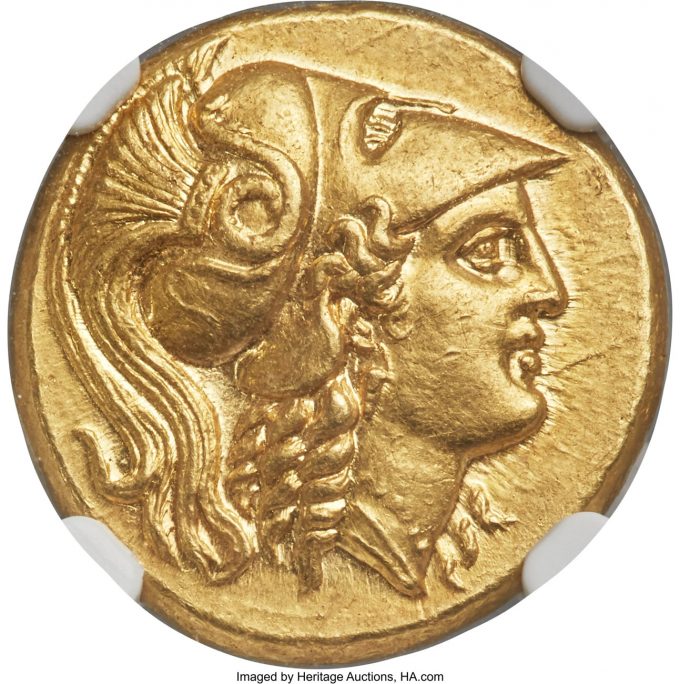 A Philip II (359-336 BC). AV stater (19mm, 8.57 gm, 9h). NGC MS 5/5 – 4/5 (estimate: $6,000-8,000). A bright and incredibly well-preserved posthumous gold Stater of Lampsacus under Philip III Arrhidaeus, displaying deeply-defined motifs where even the braided manes of the steeds are fully articulated, enhanced by ample flow lines likely the product of being struck with fresh dies. 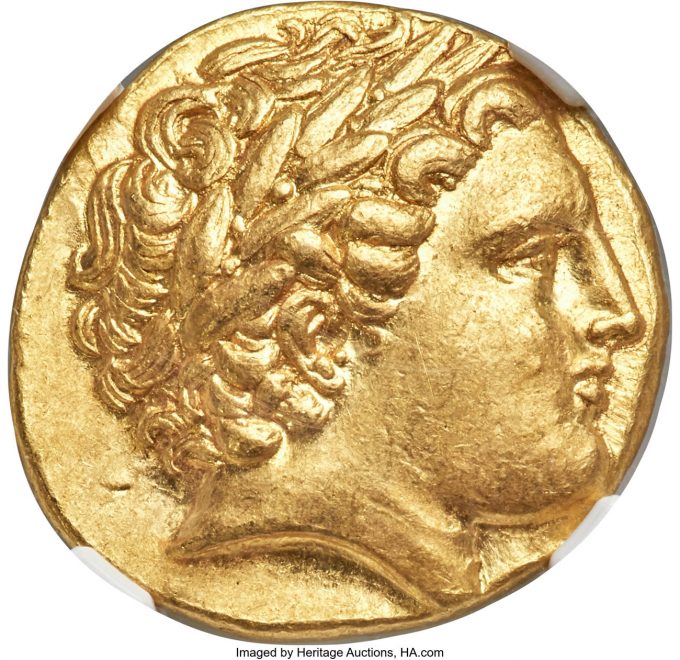 For images and information on all lots in the sale, visit HA.com/3099.