A high-denomination Gold Certificate with a portrait of the first US Secretary of the Treasury could bring $375,000 or more when it crosses the block in Heritage Auctions’ Central States US Currency Signature® Auction May 4-7.

Alexander Hamilton served as Secretary of the Treasury from 1789-95, and preferred a monometallic gold standard, but eventually he authorized the issue of bimetallic currency at a fixed 15:1 ratio of gold to silver. The Fr. 1218e $1,000 1882 Gold Certificate PMG Very Fine 30 is an absolute rarity coveted by serious collectors.

“The Friedberg 1218e is in extraordinary demand, and this example is one of only two that are available to collectors,” Heritage Auctions Vice President of Currency Dustin Johnston said. “The total population for this magnificent note actually stands at five, but three are out of reach: one is at the Federal Reserve Bank of Chicago, another at the Federal Reserve Bank of San Francisco and existence of the third in private hands could not be confirmed, so the demand for this extraordinary note is more than understandable.” 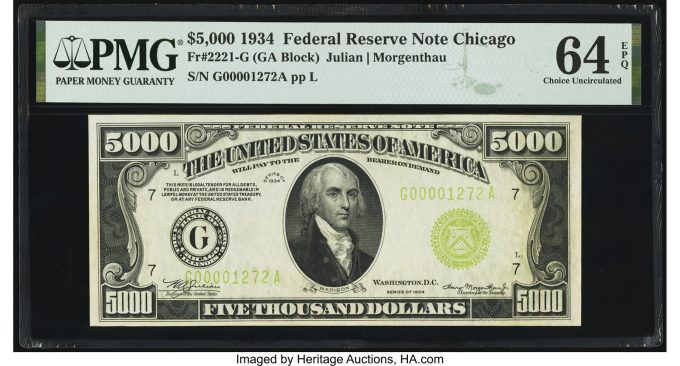 A Fr. 187j $1,000 1880 Legal Tender PMG Very Fine 30 Net (estimate: $150,000) is a beautiful high denomination note with a vignette of Columbus in His Study and a portrait of DeWitt Clinton, who was governor of New York from 1825-28 after three stints as the mayor of New York City. The earliest known record of this note being offered to the collecting community was in 1980, and Heritage Auctions has offered it twice since, in 2001 and again in 2013, when it brought a winning bid of $176,250. Track & Price lists 14 different serial numbers for this Friedberg number with only one piece that was part of an institutional collection, but seven just of those 14 Fr. 187j notes have appeared at auction since 1994. 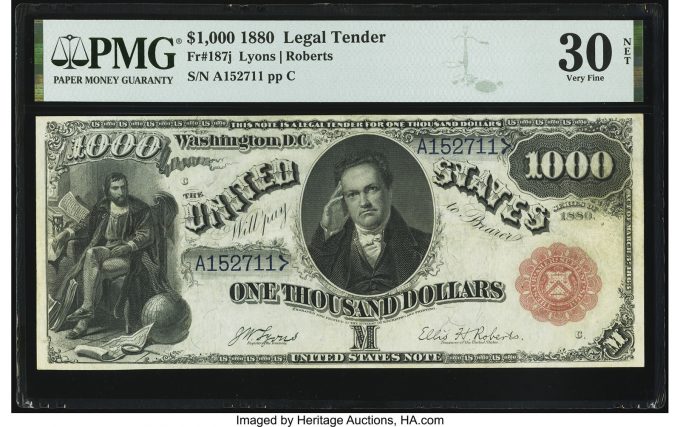 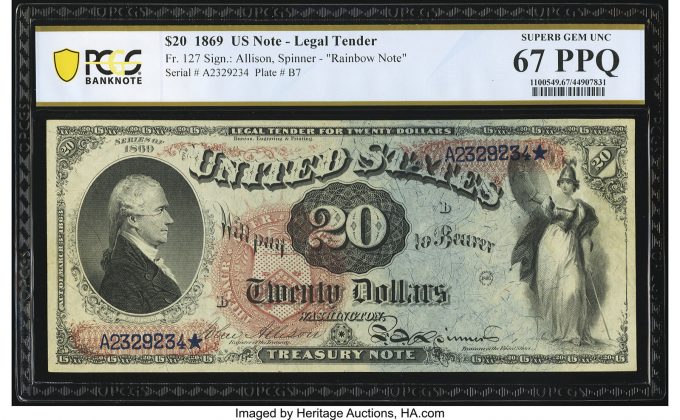 A lightly handled Fr. 1132-G $500 1918 Federal Reserve Note PMG Choice Very Fine 35 EPQ★ (estimate: $40,000+) carries the coveted EPQ grade modifier and boasts the eye appeal needed to land the ★ designation. This example is among the elite, with no others carrying the same grade and just one other Fr. 1132-G, which last appeared at auction in 2013, receiving a higher grade.

Other top lots include, but are not limited to: 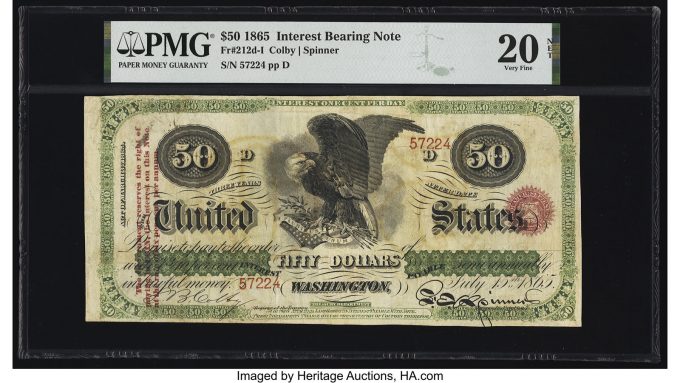 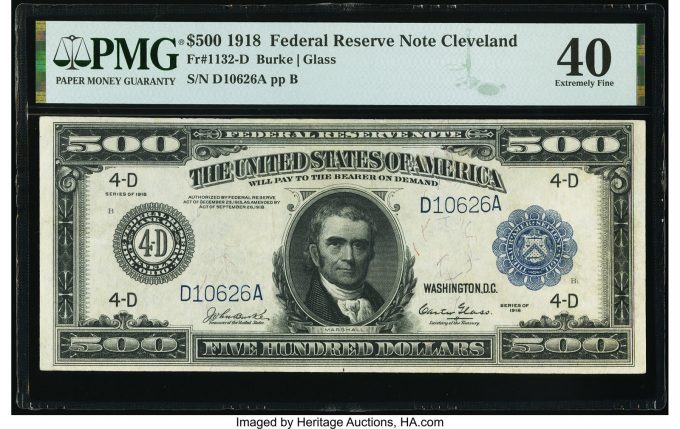 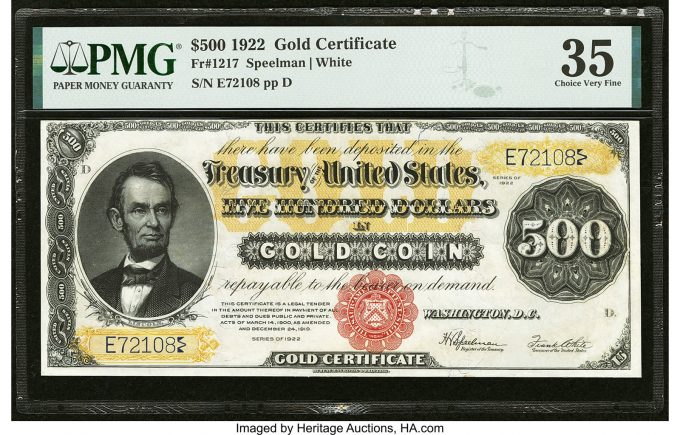 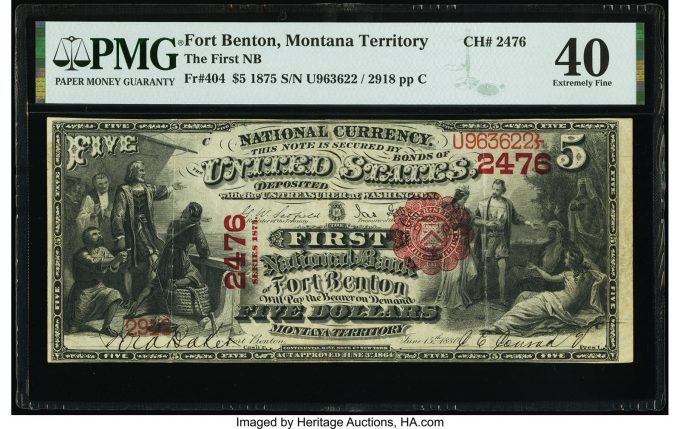 Also featured among the event’s 1,289 lots is the renowned collection of Ibrahim Salem, who is widely regarded as one of the most dedicated of all banknote collectors. He aggressively sought notes from all countries and regions around the globe; this sale includes an incredible offering of some of the desirable US banknotes from his collection. Salem chased notes with rare serial numbers, and some of the 226 lots in this sale from his collection feature Serial Number 1, or other special serial numbers.

Among the top choices from Salem’s collection is a rare Fr. 2221-K $5,000 1934 Federal Reserve Note. PMG Choice Uncirculated 64. Attrition rates for $5,000 FRNs were much higher than the $10,000s, in part because of the preservation of so many very nice $10,000 notes in the Binion hoard. Some of the nicest $5,000s — including the 1934 note offered here — come from a little run of Dallas notes discovered nearly two decades ago. While they were nearly consecutive by serial number, the range in eye appeal and technical aspects makes this example among the most captivating. 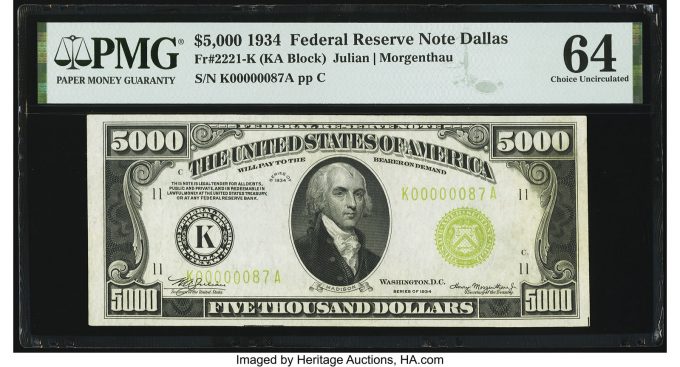 More information about the extraordinary items from Salem’s collection can be found at this link.

For images and information on all lots in the sale, visit HA.com/3587.

Newer PCGS TrueView adds value
Back to list
Older Q&A: I have a coin folder that has a hole for a 1965-D Lincoln cent, yet the coin is not listed in any catalog I have encountered. Why?