From the Colonel’s desk: “What Might Have Been” – Abraham Lincoln’s Kentucky Cent

The Lincoln Cent 2009 “Birth and Early Childhood in Kentucky” has a strong central image and no superfluous design elements. Move the pointer to zoom.

(This article follows on from last week’s article “From the Colonel’s Desk” on the 2009 Lincoln Cents Bicentennial.)

In 2008 the Abraham Lincoln Bicentennial Commission had big plans for Kentucky.

Later that evening, “A Kentucky Salute to Abraham Lincoln” was hosted by the Kentucky Center for the Performing Arts. The musical segment included the opera soprano Angela Brown and the Louisville Orchestra as well as the debut of Peter Schickele’s “Lincoln at Ease”. Actor Sam Waterston and Lincoln scientist Harold Holzer presented their acclaimed dramatic short story, Lincoln Seen and Heard. 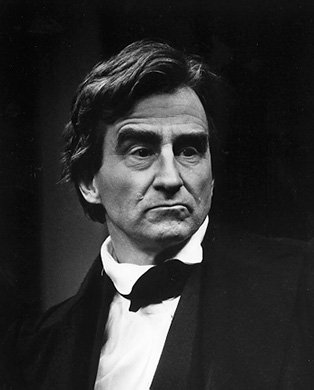 Actor Sam Waterston as Abraham Lincoln. Plans for his narration of the Gettysburg Address in Hodgenville on February 12, 2008 met an icy fate. (Courtesy of the Lincoln Center Theater).

A grand opening ceremony for the celebrations was scheduled for the next day, February 12, at the Abraham Lincoln Birthplace National Historic Site in Hodgenville.

Unfortunately, Mother Nature interrupted the festivities – a snowstorm froze Kentucky on the evening of the 11th and well into the next morning. The streets were too icy to travel safely, and the ALBC’s official launch ceremony had to be filed under “W” for “What Might Have Been”.

At the canceled ceremony, First Lady Laura Bush would have given the keynote address. The music would have been provided by Saxton’s Cornet Band, musician and conductor Everett McCorvey, and the American Spiritual Ensemble. Governor Steve Beshear and other politicians were to share the stage, and Sam Waterston was ready to deliver the Gettysburg address.

Another aspect of “What Might Have Been” on the occasion of Abraham Lincoln’s 200th birthday concerns the 2009 cent, which was issued to celebrate his birth and childhood in Kentucky.

Possible designs that remain on the cutting room floor are always part of the history of modern US coins. The sketches are drawn up by the mint’s artists and / or members of the office’s artistic infusion program. The mint usually consults relevant organizations, such as the Abraham Lincoln Bicentennial Commission, for guidance and advice. Design candidates are presented to the Citizens Coinage Advisory Committee and the US Commission of Fine Arts, which both review them and make formal recommendations to the Treasury Secretary. The secretary has the final say about which designs will become the coin of the empire and which will go down in history as “What Might Have Been”.

For the 2009 Lincoln Cents, the ALBC submitted design themes for all four bicentennial coins to the United States Mint, but did not request a standardized template or additional inscriptions.

The commission suggested that the designs of the coins “convey a sense of a place” and also suggested “a place identifier” – either a full state name or a two-letter abbreviation. (This proposal was rejected 9 to 1 by the Advisory Committee on Citizen Coins.)

To symbolize Lincoln’s birth and humble beginnings in Kentucky, the subject was a log cabin. While historians have stated that the cabin at the Lincoln Birthplace National Historic Site is not Lincoln’s authentic home, its rusticity epitomizes its humble circumstances.

All five design candidates that were examined by the CCAC on September 25, 2007 were similar in appearance and feel. 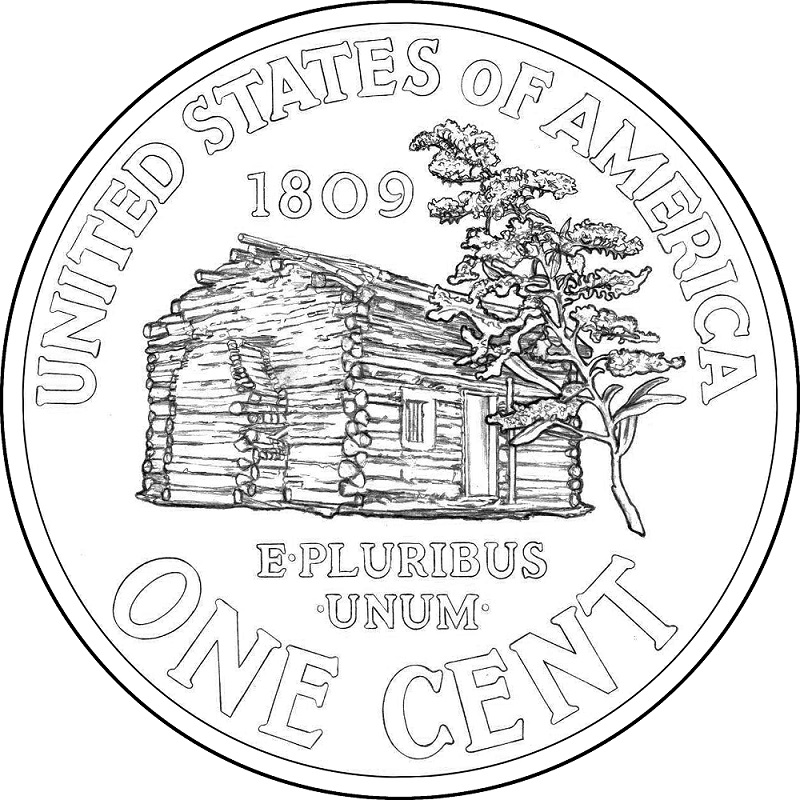 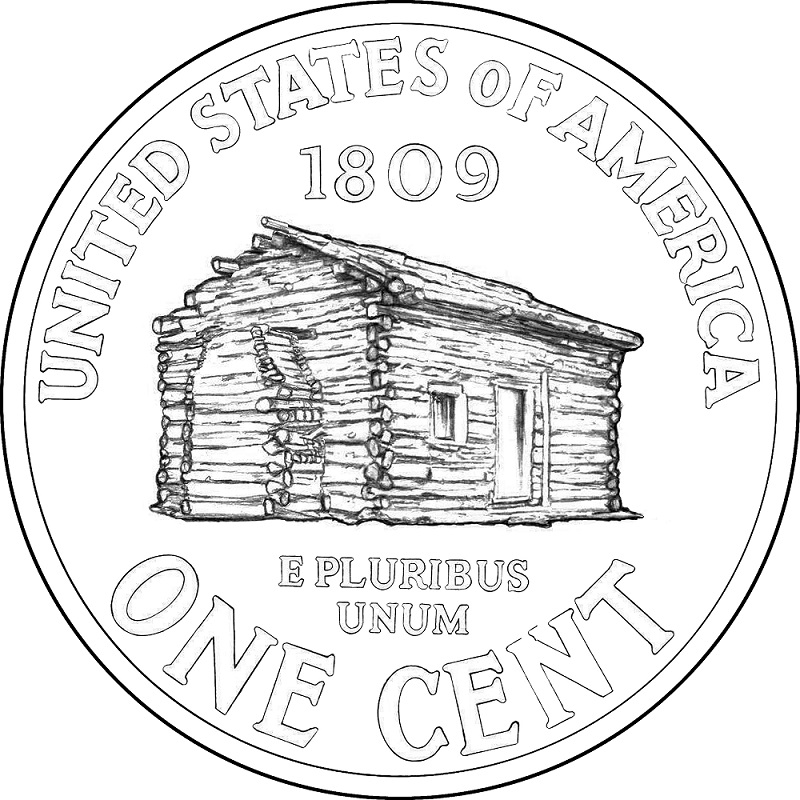 Potential inverted design 02. This was one of the CCAC’s favorite sketches for the Kentucky penny. 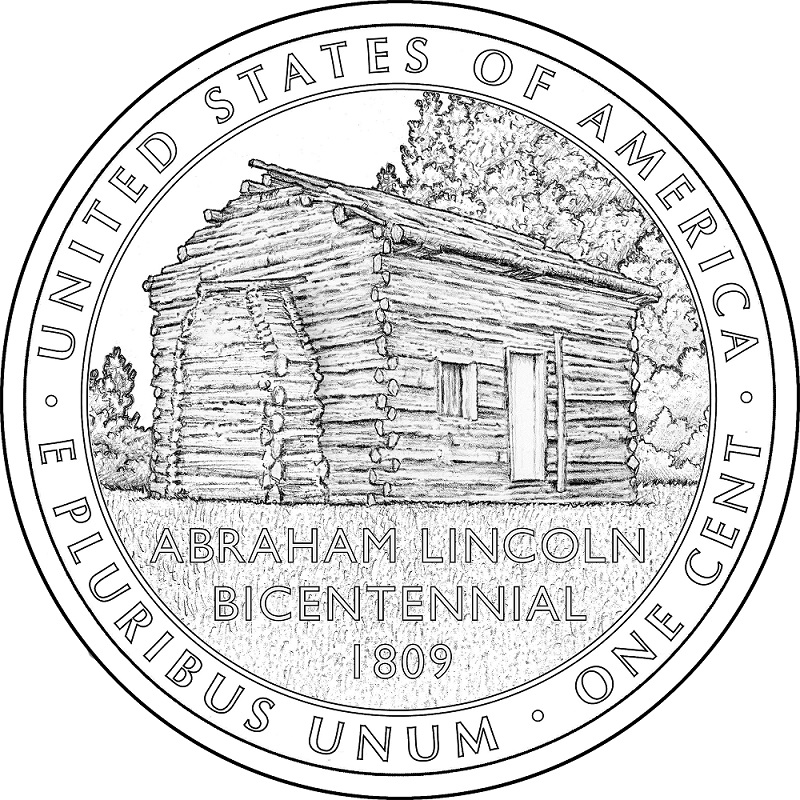 Potential reverse design 03. The one-cent coin is only 19 millimeters in diameter – too small, in the opinion of the CCAC, to support a complicated design like this one. 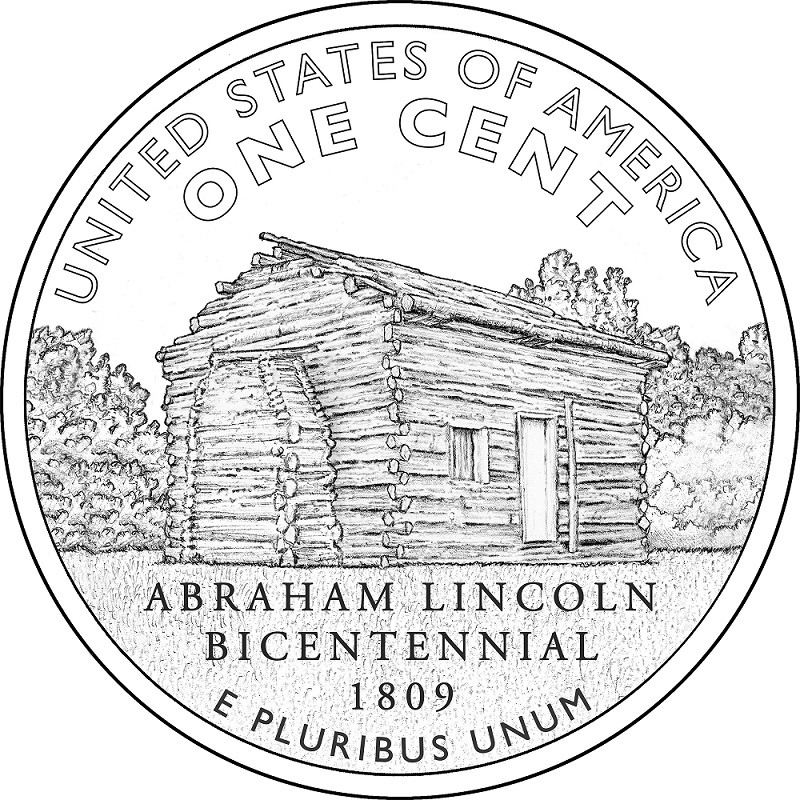 Potential reverse design 04. This design received a few votes but was deemed too “busy” for the Lincoln Cent small canvas. 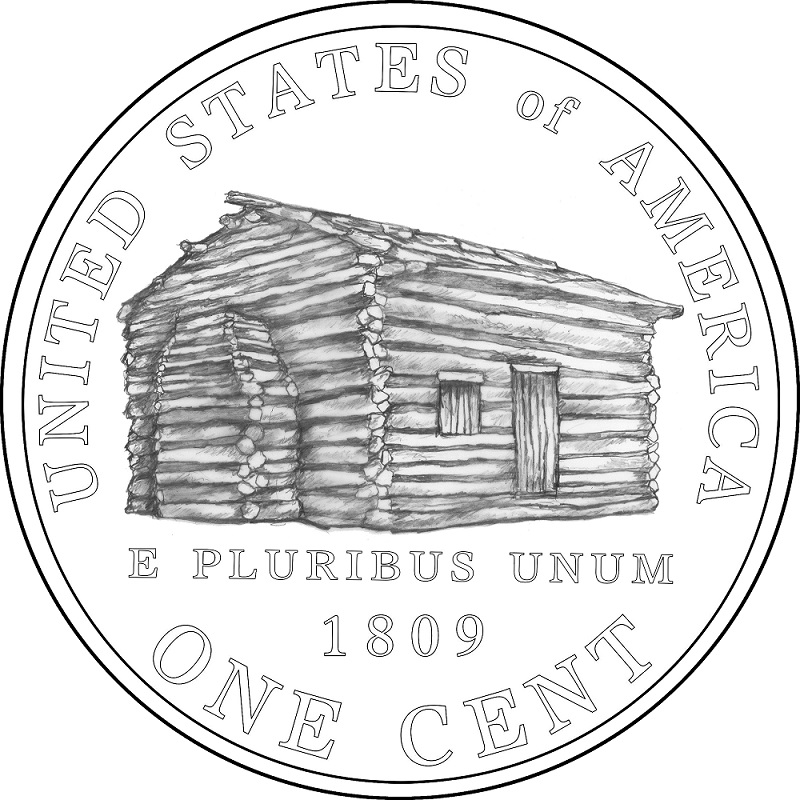 Potential reverse design 05. This motif and design 02 were the strongest competitors from the point of view of the CCAC.

After an initial discussion, the committee decided to focus further review on the LC-R-1-02, LC-R-1-04, and LC-R-1-05 designs. Members generally appreciated the simplicity of the 02 and 05 designs, the highlighting of the central image of the log cabin, and their tidy appearance. Each member rated each design on a numerical scale from 0 (the lowest rating) to 3. Designs 02 and 05 each received 18 out of 30 possible points.

CCAC Chairman Mitch Sanders wrote to Treasury Secretary Henry Paulson: “Members of the committee generally felt that the simple log cabin image on these designs would work well on a small coin like the cent.” (Design 04, with a busier one Background made up of trees and foliage, was a distant third choice, getting only 6 out of 30 possible points).

Ultimately, the design of the “living” coin was most similar to the 05, with E PLURIBUS UNUM and the year 1809 under the log house, plus a horizon line and a slightly structured foreground.

The mint’s designer, Richard Masters, is Professor Emeritus at the University of Wisconsin Oshkosh. As a member of the Mint’s Artistic Infusion Program for nearly 20 years, he has designed dozens of US coins and medals.

Dennis Tucker, Honorable Order of Kentucky Colonels, is the editor of Whitman Publishing, a leading manufacturer of warehouse and display supplies, reference books, and other resources for collectors and hobbyists. He was named a Kentucky Colonel in March 2021 for his career in book publishing and promoting Bluegrass State’s status as a major subject in numismatics. His column, “From the Colonel’s Desk,” examines the Commonwealth’s rich connections to American coins, tokens, medals, paper money, private currency, and related artifacts.

Newer NGC certifies the Katherine D. Ortega Collection of Modern US Coins
Back to list
Older Collectible Bowers: Among my favorites – modern dollars