The United States Naval Academy in Annapolis, Maryland has received an important piece of American and naval history, the bell from the SS Central America, the legendary “Ship of Gold” that was led by Commander William Lewis Herndon (1813-1857). The famous ship sank in 1857 while carrying 578 passengers and crewmembers and a king’s ransom of California Gold Rush treasures.

The 268-pound ship’s bell from the legendary “Ship of Gold,” the SS Central America that sank in 1857, has been donated by Dwight Manley of Brea, California to the United States Naval Academy. (Photo courtesy of California Gold Marketing Group.)

Rare coin expert, real estate developer, philanthropist, and former sports agent Dwight Manley of Brea, California donated the Central America’s 268-pound bronze bell to the Academy where there has been an important tribute monument to Commander Herndon for the past 162 years. The historic bell was formally dedicated on May 23, just prior to the 2022 annual monument climb by the Academy’s freshmen (“plebes”). 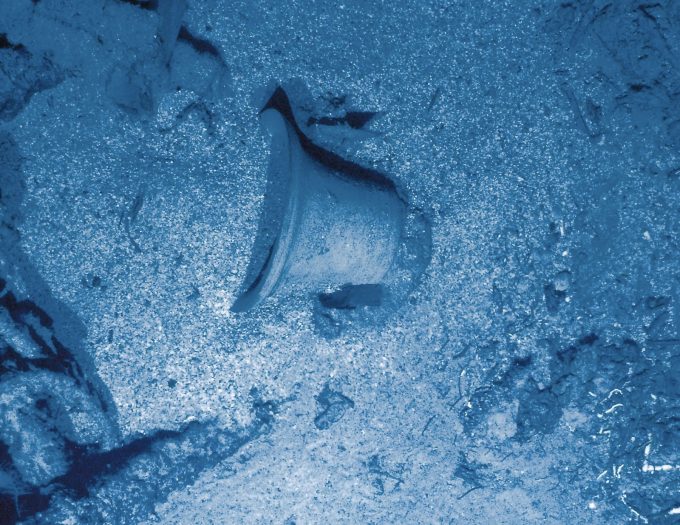 Using a remote-controlled submarine in 1988, the 268-pound bell from the fabled “Ship of Gold,” the SS Central America that sank in 1857, was discovered 7,200 feet under the surface of the Atlantic Ocean. (Photo courtesy of California Gold Marketing Group.)

A distinguished career naval officer, Herndon sacrificed his life in a brave effort to save the Central America.

“He saved the lives of 152 passengers before he made the decision to go down with the ship,” according to the Naval Academy.

The Central America sank in the Atlantic Ocean 150 miles off the North Carolina coast during a hurricane on September 12, 1857. In 1860, a 21-foot-tall granite obelisk was dedicated in Herndon’s honor near the center of the Naval Academy campus. 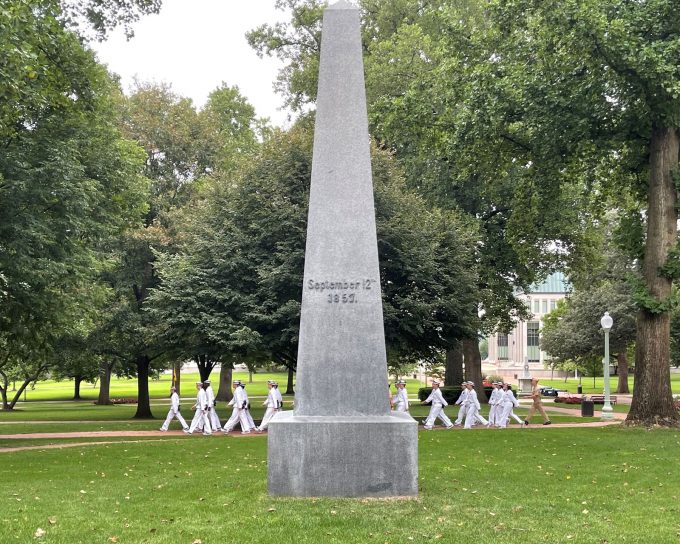 The 21-foot-tall memorial to William Herndon, Captain of the SS Central America, was constructed in 1860 at the United States Naval Academy campus. (Photo courtesy of California Gold Marketing Group.)

Prior to his important assignment as Master of the United States Mail Steamship Central America in 1855, Herndon served with distinction during the Mexican-American War of 1846-1848 and led a successful South America expedition in 1851 that resulted in his acclaimed 1854 report, Exploration of the Valley of the Amazon.

“Commander Herndon is a revered and honored name in the US Navy. His legacy has been part of the annual rite of passage at the Academy with his monument scaled by the current year’s plebes. It is my extreme privilege to be able to unite the bell with the monument so all in attendance each year can experience the sounds Commander Herndon heard as he went down with the ship after 40 hours of valiant effort to save every woman and child aboard,” said Manley who spoke at the bell’s May 23 dedication ceremony.

Last August, Manley met at Annapolis with Naval Academy Superintendent, Vice Admiral Sean S. Buck, to offer the gift of the recovered historic bell, and the Department of the Navy accepted the offer. 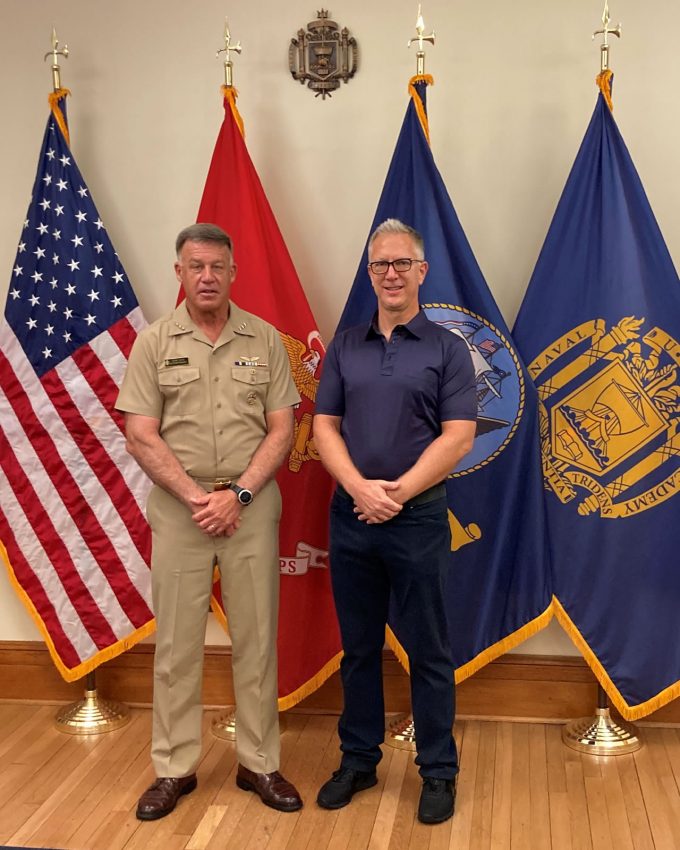 Assistant Secretary of the Navy Meredith Berger approved the gift “to support and educate the Brigade of Midshipmen,” and in a letter to Manley she expressed the Department of the Navy’s “sincere appreciation.”

The bell was discovered 34 years ago, 131 years after the ship sank. It is larger than most ships’ bells of the era, measuring nearly two feet tall and a little over two feet wide at its lower flange edge.

“The site of what we thought might be the SS Central America was discovered in 1988 about 7,200 feet below the ocean’s surface. Using a robot submarine, we located a bell and could see part of the embossed lettering on it, MORGAN IRON WORKS NEW YORK 1853. That provided additional evidence that the shipwreck site was indeed the Central America,” explained Bob Evans, the chief scientist and historian on the recovery missions who also attended the bell’s dedication ceremony at the US Naval Academy. “The bell provided spectacular and undeniable confirmation we located the ship.”

The Central America was a 280-foot long, three-masted side-wheel steamship carrying what Life magazine later called “The Greatest Treasure Ever Found,” tons of California Gold Rush-era gold coins and assayers’ ingots. The loss of the valuable cargo was a major factor in the economically devastating financial panic of 1857 in the United States.