An extraordinary selection of notes from nations that at times have been under Dutch control will be up for grabs in Heritage Auctions’ Paper Money Fair – Netherlands World Banknote Signature® Auction April 21-22.

Included in the sale are two exceptional collections of notes, one of which is perhaps the most significant assemblage of currency from the island nation of Curaçao, the other including prized notes from African nations, including Angola and Ethiopia.

“The collections in this auction represent extraordinary opportunities for collectors of paper money from around the world, specifically those with Dutch history,” said Dustin Johnston, Vice President of Currency at Heritage Auctions. “There are some exceedingly rare notes that will be offered in this sale, including some with low serial numbers, which are always in high demand among the most serious collectors.”

The Mathis Verkooijen Collection is set to become one of the most important offerings of Curaçao currency at public auction, if not the most important offering ever. The collection boasts an incredible Serial Number 1 set for the 1918 and 1925 issue, each of which is enormously rare in any issued form, let alone featuring the first serial, as well as other museum-worthy inclusions.

Arguably one of the rarest issued world banknotes ever offered at Heritage Auctions, a spectacular Serial Number 1 Curaçao Curacaosche 500 Gulden 1925 Pick 14 PMG About Uncirculated 55 (estimate: $40,000+) is the first serial number of the highest denomination of the 1925 series. Of the 1,000 printed and issued, all but two have been redeemed, and this example, the crowning banknote of the 1925 Serial Number 1 series, is the lone example graded in the PMG Population Report at the time of cataloging. 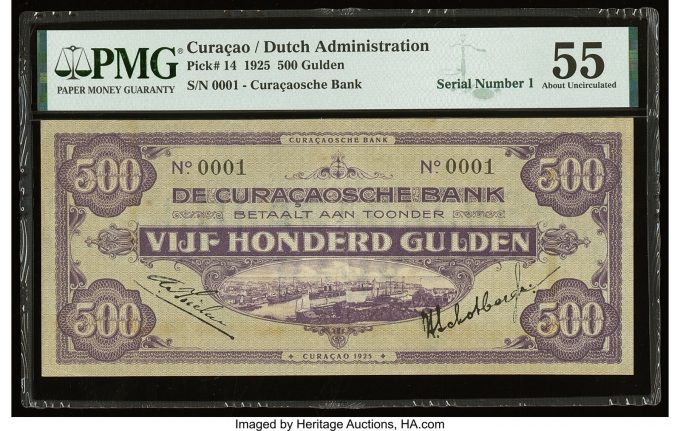 A Serial Number 1 Curaçao Curacaosche Bank 250 Gulden 1918 Pick Unlisted PMG Uncirculated 62 (estimate: $40,000+) is likely the last of the original 400 examples that has not been redeemed. Featuring the lowest possible serial number – 001 – it is arguably the rarest banknote in existence, since it is the only extant example. 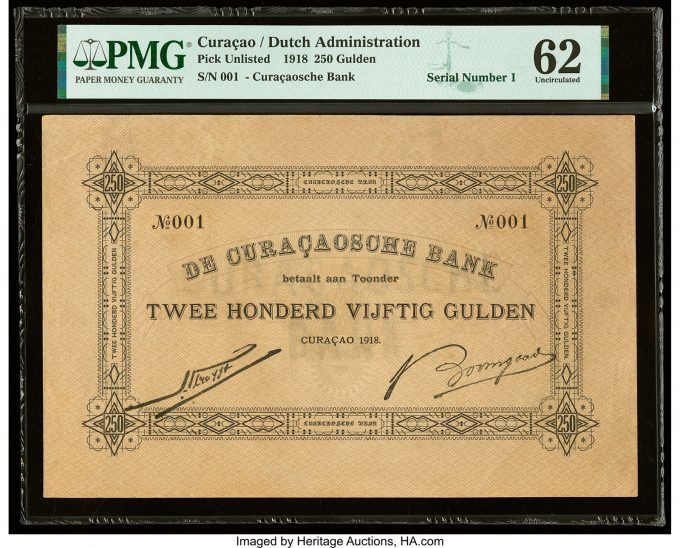 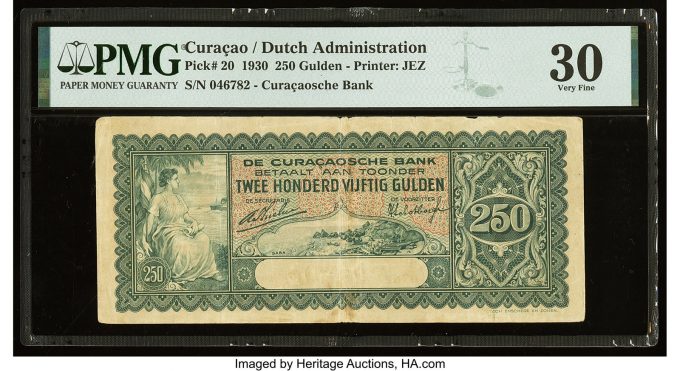 High-denomination Curaçao banknotes are notoriously rare, regardless of the series, and the offered note is one of only a few known to remain in private hands. This magnificent is so rare that just two examples are graded in the PMG Population Report.

The Bruce Smart Collection is an exceptional AZ offering with something for every collector — a well-curated array of world currency, with key rarities and superior grade being the focus. Angola and Ethiopia Serial Number 1s are featured, and fit well in this Serial Number 1-packed sale.

Highlights from the Bruce Smart Collection include, but are not limited to:

A Serial Number 1 Angola Banco De Angola 500 Angolares 6/1/1927 Pick 76a PMG Choice Uncirculated 63 (estimate: $7,000+) is the highest denomination of the series and happens to be incredibly scarce in issued format. Angola banknotes are increasingly popular in recent years, and exceedingly rare in high grade. The 1927 series is especially popular due to its stunning design elements and rarity. This example is graded Choice Uncirculated and is seen with the first serial number for prefix “1G.” According to traceable auction data, this example may be only the third to cross a major auction block since 2003; only five issued examples are graded in the PMG Population Report. 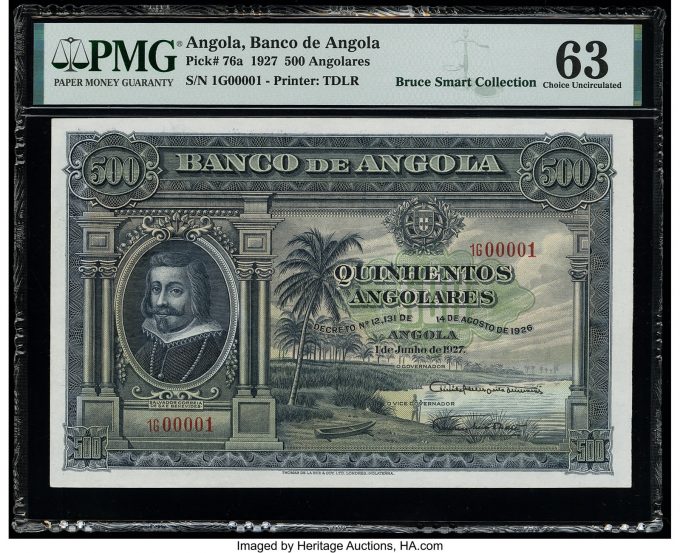 An India Reserve Bank, Persian Gulf Issue 100 Rupees ND (1959-70) Pick R4 Jhunjhunwalla-Razack 6.12.4.1 PMG Choice Extremely Fine 45 (estimate: $6,000+) is an example of what was, for less than a decade, highest denomination banknote to circulate in Bahrain, Kuwait, Muscat, Oman, Qatar and the United Arab Emirates – similar to Bank of India 100 Rupees of the era, but printed in green and with prefix Z. This denomination has not been offered since 2017 at Heritage Auctions , and it is rarely seen in this excellent and lightly circulated grade. This exact banknote is the plate note for the type in the India chapter of Owen Linzmayer’s The Banknote Book. 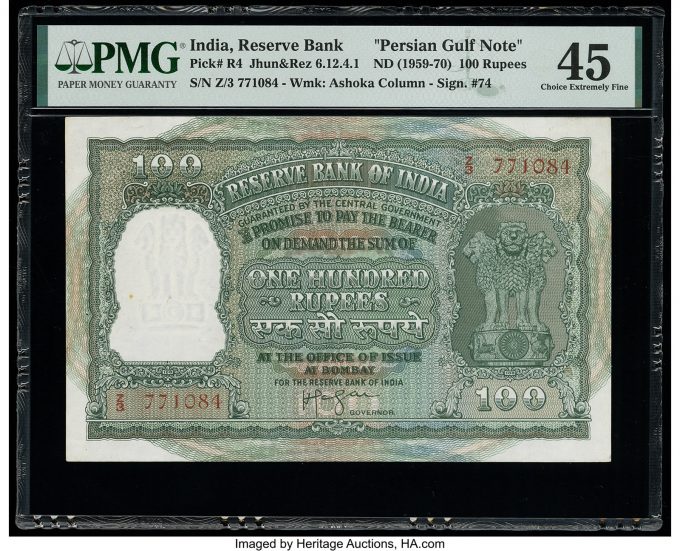 An Ethiopia Bank of Ethiopia 500 Thalers 5/1/1932 Pick 11 PMG Choice Uncirculated 63 EPQ (estimate: $4,000+) is impressive in sheer size and face value. Preserved for 90 years, this is the single finest graded example in the PMG Population Report. 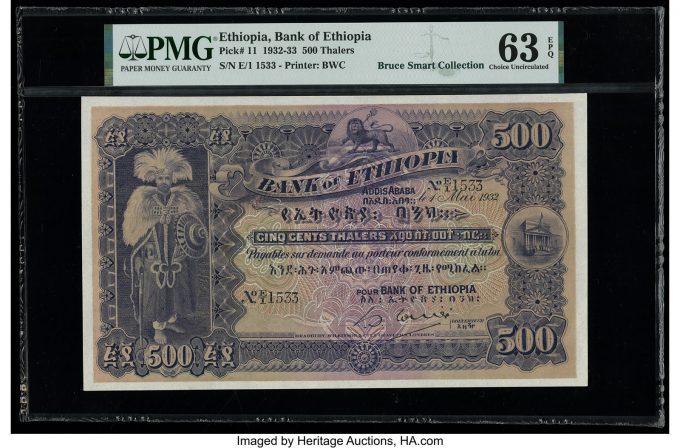 Other auction highlights include, but are not limited to: 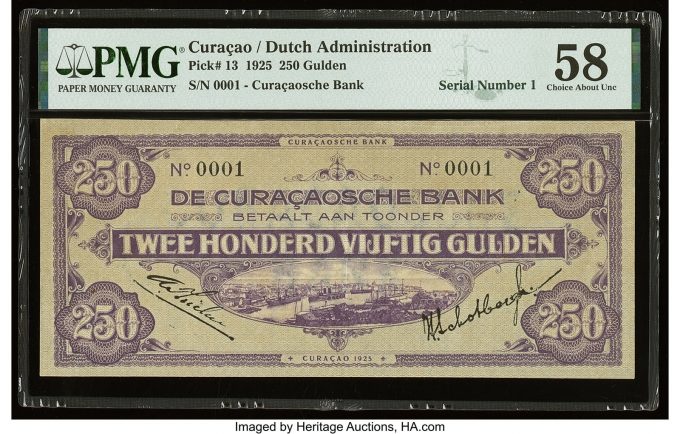 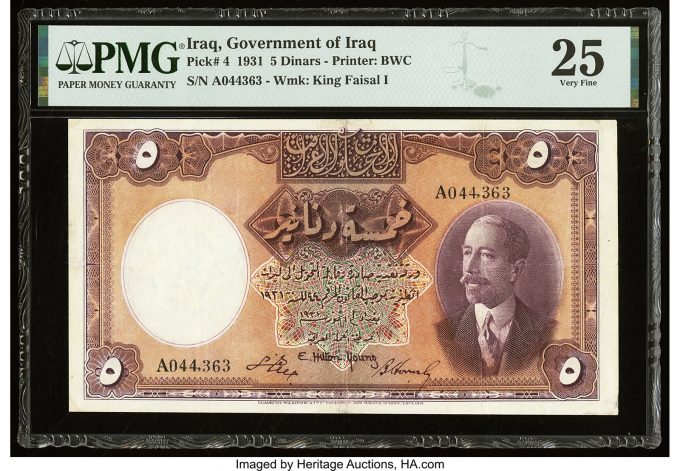 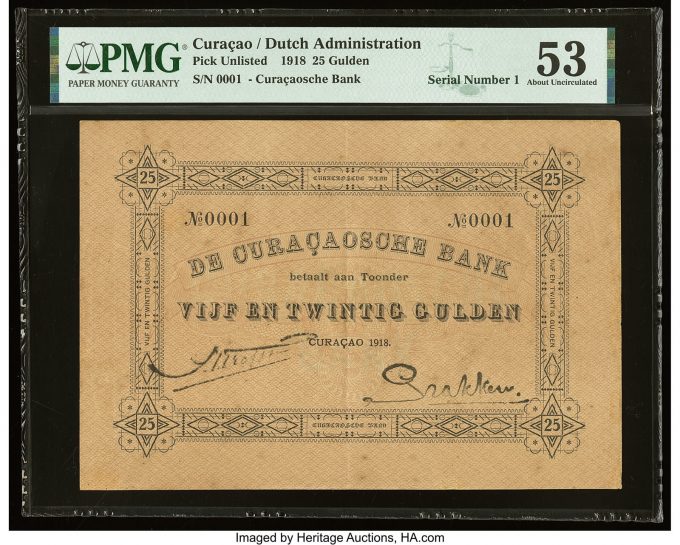 For images and information about all lots in the sale, visit HA.com/4036.