A mintmark was added to this silver coin to make it look like a valuable Carson City example.

The 1893-dated Morgans have a wide range in value. At one end is the 1893-S, a key date of the series; these coins sell for prices over $100,000 even in low Mint State. At the other end are the 1893 Morgans from Philadelphia, which price guides suggest are worth about $1,000 to $2,000 in low Mint State. Between them are the 1893-O and 1893-CC; in About Uncirculated grades and higher, they sell for several for several times what the Philadelphia ones command.

The Carson City issues actually had the highest mintage of all the 1893 Morgans: 677,000. Part of the allure of the 1893-CC is that this was the last year coins were struck in Carson City, Nevada, whose Branch Mint is associated with the West’s silver mining boom in the late 19th century. NGC recently received a purported example of an 1893-CC Morgan dollar. 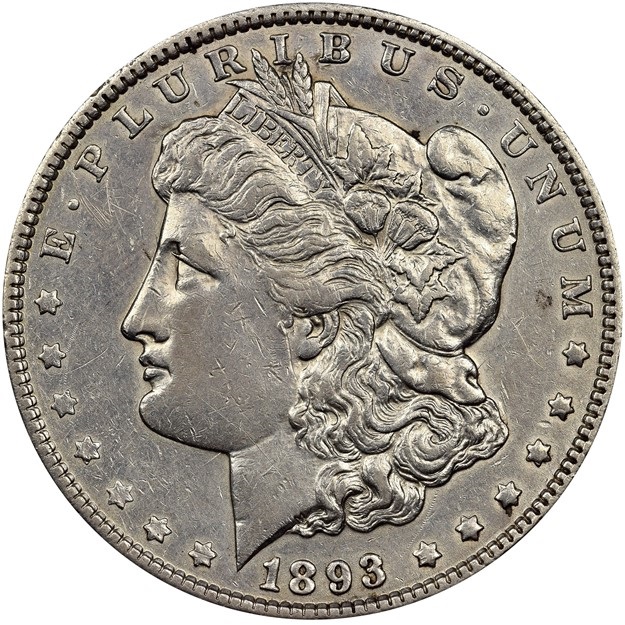 Any time that a mint mark can mean a difference of hundreds or even thousands of dollars in the value of a coin, a close examination is warranted. In this case, we can see the metal around the mintmark area is discolored, which is a bright red flag.

Close-up of added mint mark on the 1893 Morgan dollar.

Looking at the mint mark itself, it is clear that it is misshapen. In particular, the edge of the inside of each ‘C’ is not smooth. The mint mark is smaller than a grain of rice, so a loupe is especially helpful when collectors encounter a raw coin like this for sale.

This coin almost certainly began its life as an 1893 from Philadelphia. One might wonder why the counterfeiter didn’t try to make it look like an 1893-S, which is generally worth several times what an 1893-CC is. Perhaps the counterfeiter knew the intense level of scrutiny that a key date like the 1893-S would receive. Maybe the counterfeiter was hoping the buyer would be less likely to submit an 1893-CC for expert certification. Don’t forget: Coins certified by NGC have a guarantee of authenticity and grade.

Did you know? NGC has created a comprehensive Counterfeit Detection resource to help collectors and dealers identify counterfeit and altered coins. Click here.