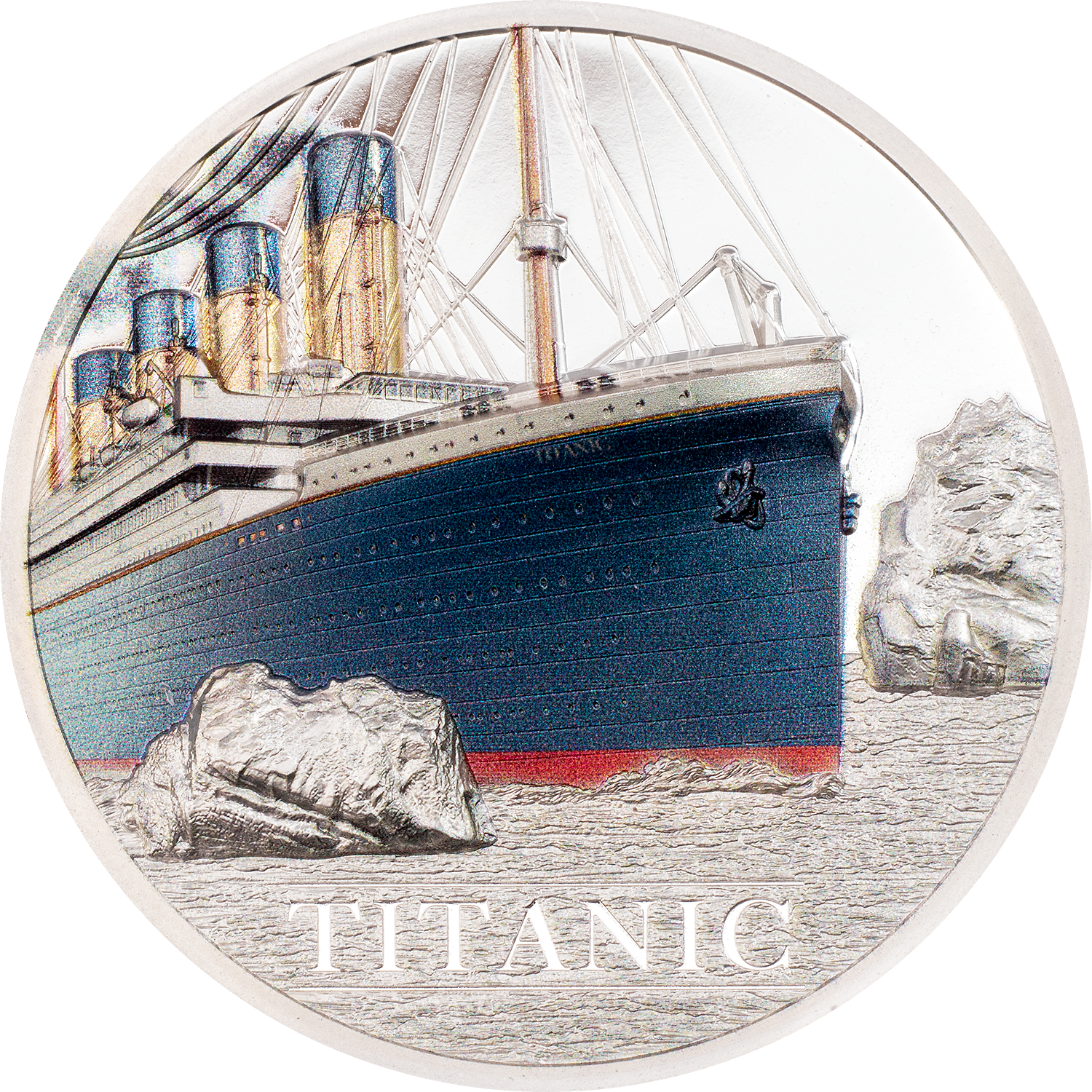 One side features a three-quarter view of the Titanic sailing to the right; icebergs to its left and right; on the turbulent surface of the water TITANICslightly recessed. 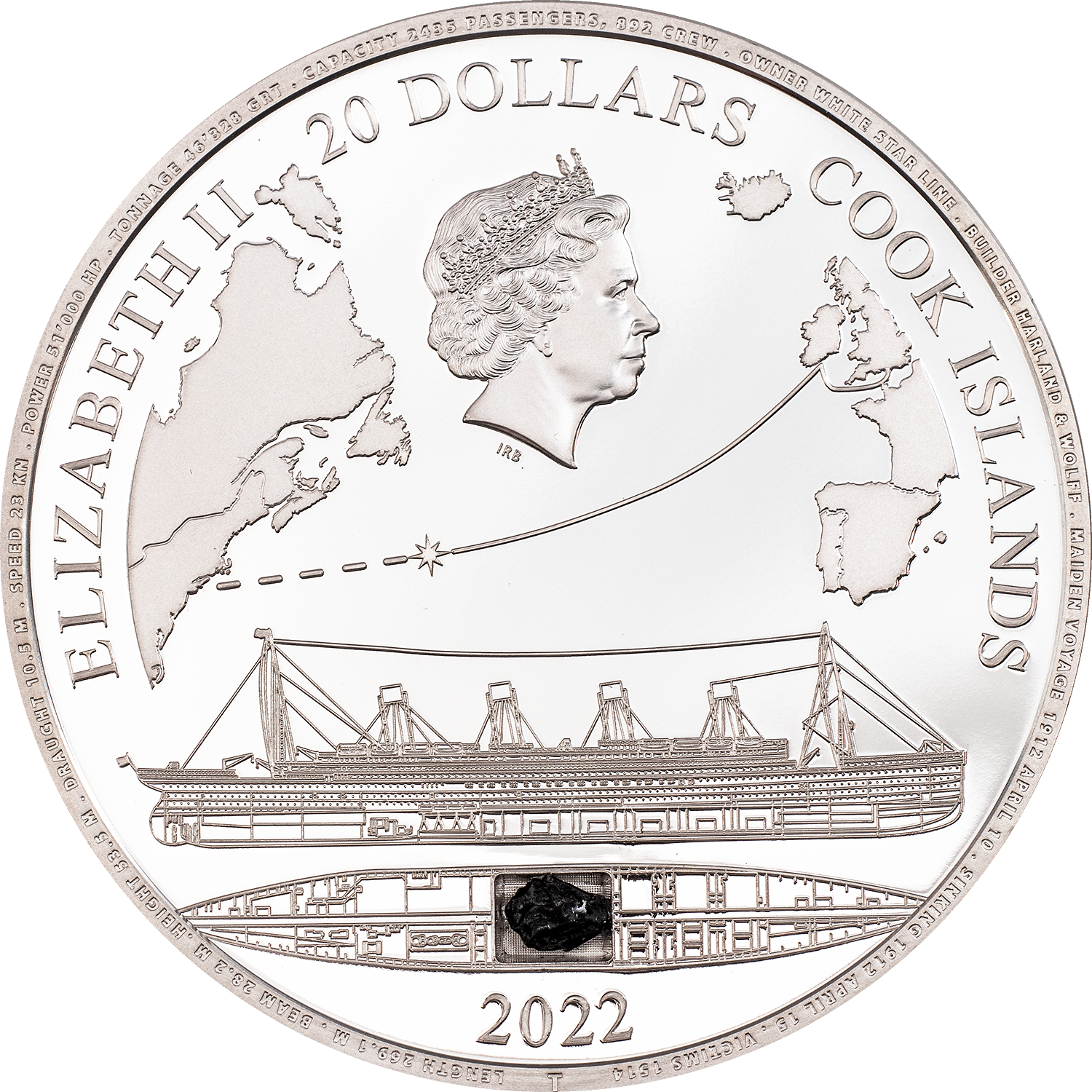 The other side of the silver coins and of the one-ounce gold coin features the planned route of the Titanic from Southampton to New York with a star at the spot where the accident happened, above the portrait of Queen Elizabeth II by Ian Rank-Broadley (IRB), around it is the name of the ruler, the denomination, and the name of the issuing nation; below an elevation of the ship from the side and of the lower deck, where the coal for the operation of the steam engine was stored. In the place of the coal bunker is an inlay of an original piece of coal from the Titanic, and below is the year 2022. The edge features the most important figures of the ship in micro minting: LENGTH 269.1 M . BEAM 28.2 M . HEIGHT 53.5 M . DRAWS 10.5 M . SPEED 23KN . POWER 51’000 HP . TONNAGE 46’328 GRT . CAPACITY 2435 PASSENGERS, 982 CREW . OWNER WHITE STAR LINE . BUILDER HARLAND & WOLFF . MAIDEN VOYAGE 1912 APRIL 10 . SINKING 1912 APRIL 15 . VICTIMS 1514.

Two aspects of the other side of the copper version are different: there is no piece of coal incorporated into the design and the depicted deck of the elevation is not the lower deck but the passenger deck.

The other side of the small gold coin features the portrait of Queen Elizabeth II by Ian Rank-Broadley (IRB), around it is the name of the ruler, the denomination, and the name of the issuing nation. Below is the year 2022. 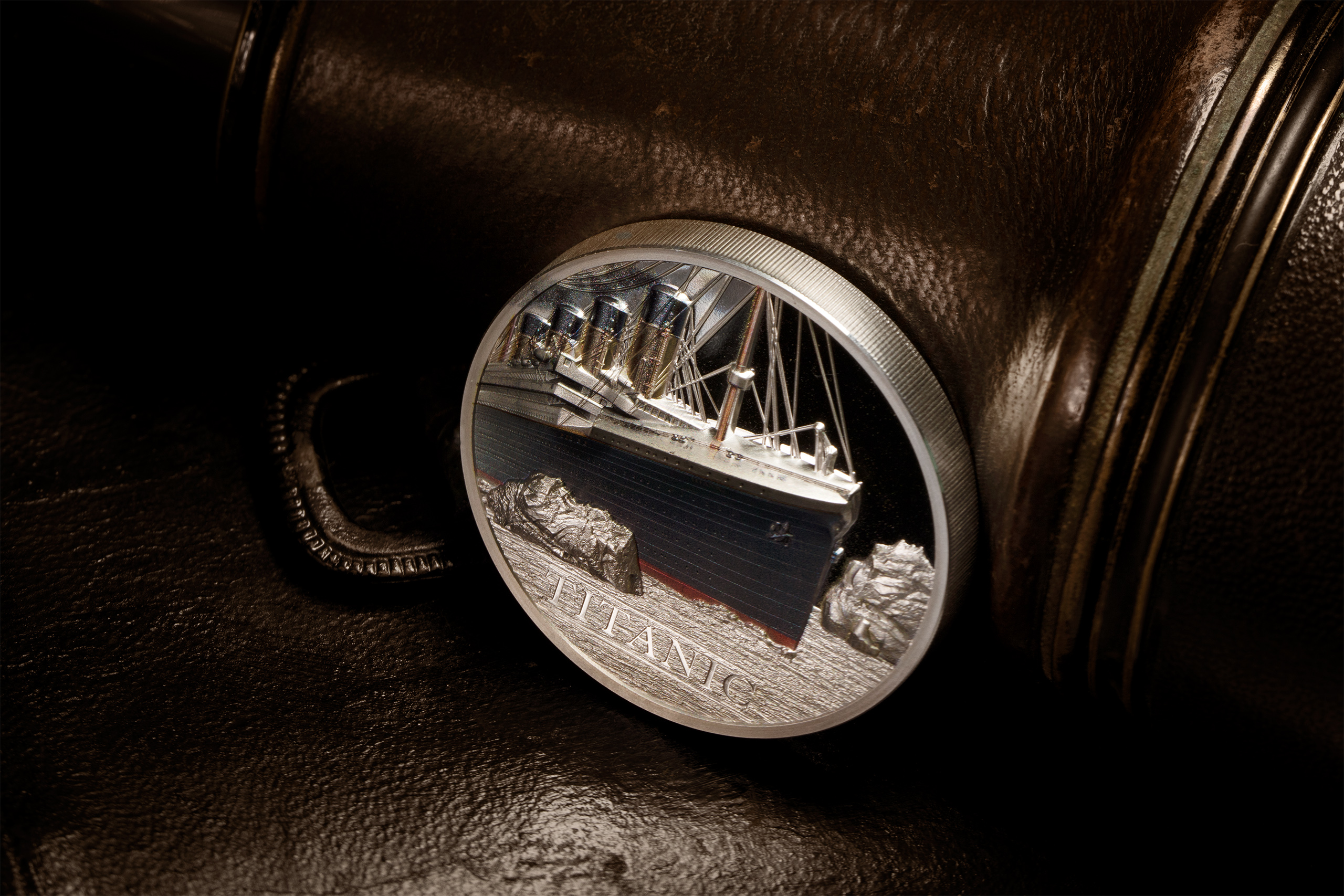 It was around 11:40 pm on April 14, 1912 when the Titanic collided with an iceberg about 300 nautical miles southeast of Newfoundland and sank within two hours and 40 minutes. About 1,500 people lost their lives in the worst maritime disaster of all time. The sinking of the Titanic was a shock that permanently changed the seafaring world. Just one year later, people from all over the world gathered at a conference to stipulate standards in the SOLAS Convention. SOLAS means Safety of Life at Sea — standards that every ship must adhere to in order to ensure that such a disaster will never happen again. The Titanic has become part of the collective memory of humankind. On the occasion of the 110th anniversary of its sinking, CIT dedicates a commemorative issue to the Titanic that includes five different coin types.

The main feature of the issue is a piece from the Titanic itself: A piece of coal from the coal bunker that was recovered in 2000 from the wreck of the Titanic at a depth of 3,800 meters. To power the ship’s three propellers, the Titanic’s steam engine consumed more than 600 tons of coal per day, which were shoveled into the furnace by 150 stokers in three shifts. CIT manages to secure a chunk of the unused coal. This item is a great rarity because, to date, only a few pieces were released for public sale in order to use the proceeds to finance the restoration and the scholarly examination of the Titanic finds. If you want to own a piece of the Titanic yourself, you may do so by purchasing one of the two silver coins or the one-ounce gold coin. They feature an inlay of original coal within the elevation of the ship, placed at the exact spot where the coal was stored in the Titanic. Accordingly, the copper version, which was produced without the coal inlay, shows the passenger deck instead of the lower deck.

Every single issue of TITANIC 2022 is a masterwork of modern minting craftsmanship that was turned into a small piece of art by employing a variety of technologies. Thanks to smartminting, the bow of the Titanic, which glides through the water with icebergs to its left and right, is depicted three-dimensionally. The discreet coloring imitates the original shades of the ocean liner. Pay attention to the rearmost chimney! It does not emit smoke, just like the original one: the fourth chimney was exclusively used to vent the lower decks and the kitchen, which at the time had the largest cooking areas in the world with 19 ovens each.

The edge of all issues — except for the small gold coin — shows the most important facts about the Titanic in micro minting. An engineering marvel, it left the port of Southampton on April 10, 1912. Its sinking made mankind realize the limits of modern technology. 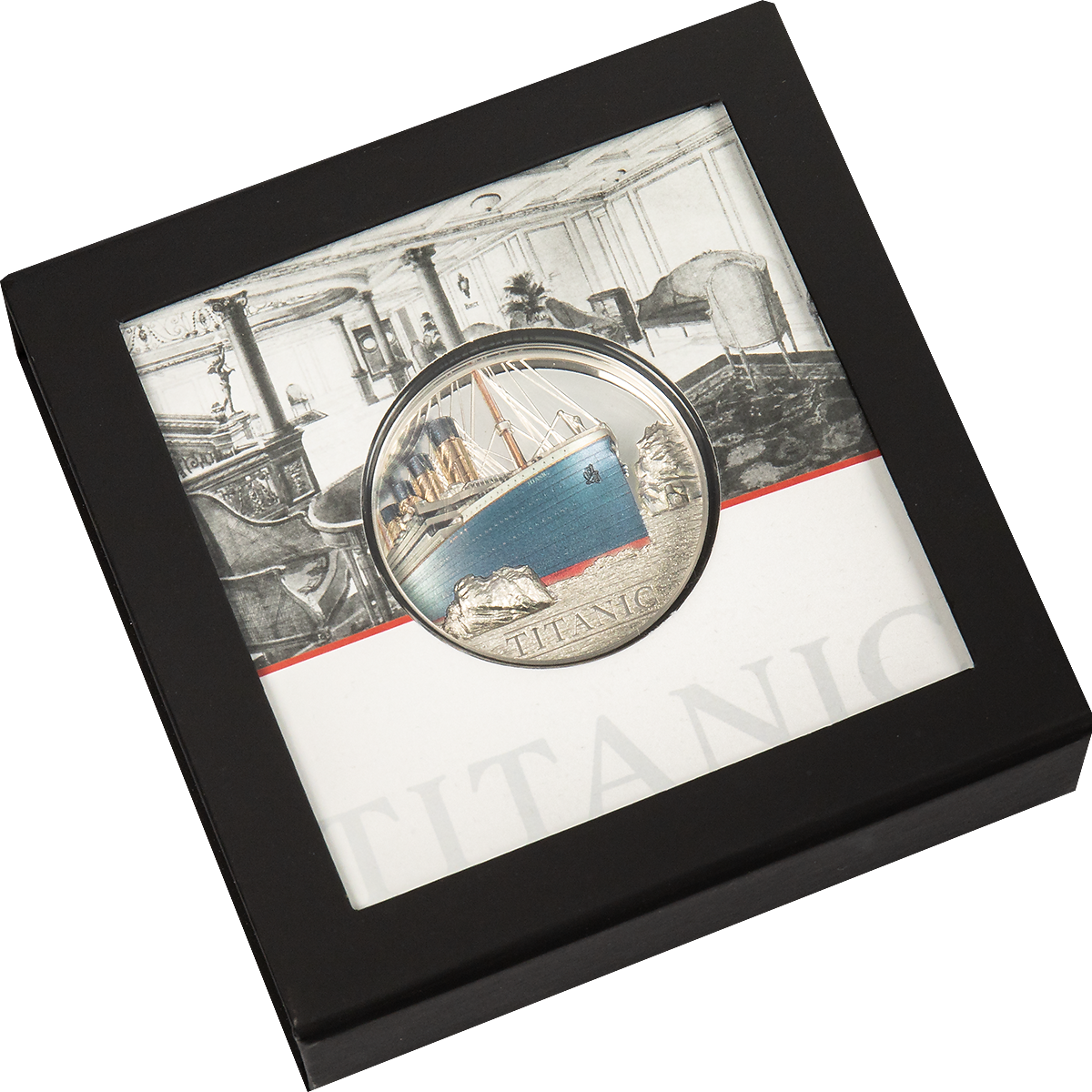 Further information about the coin:

If you want to understand the three-dimensionality of this coin, you have to watch these films.