The Central Bank of Barbados has authorized the release of new silver coins in the shape of a vintage telephone in salute to its invention and the man credited with the genius behind the feat. 2022 marks the centenary anniversary of the death of Alexander Graham Bell (1847–1922), who successfully demonstrated the telephone in public before the American Academy of Arts and Sciences in Boston, and in June 1876 at the Centennial Exposition in Philadelphia. It is a widely held opinion that no other invention in modern Western history has had such a significant impact on our civilization as the telephone. Since it was first patented in 1876, the revolutionary device has gone on to become a crucial element of technology since the end of the nineteenth century. Practically every Western household would come to have the convenience of a telephone in their homes by the end of the twentieth century. The ability to keep in contact with family and friends living far away was, for many around the world, a great comfort. News and the dissemination of information was also an important reason to have the use of telephone services since its development. This ability to talk to someone halfway around the world might never have been possible, or greatly delayed, had it not been for the genius of Alexander Graham Bell. 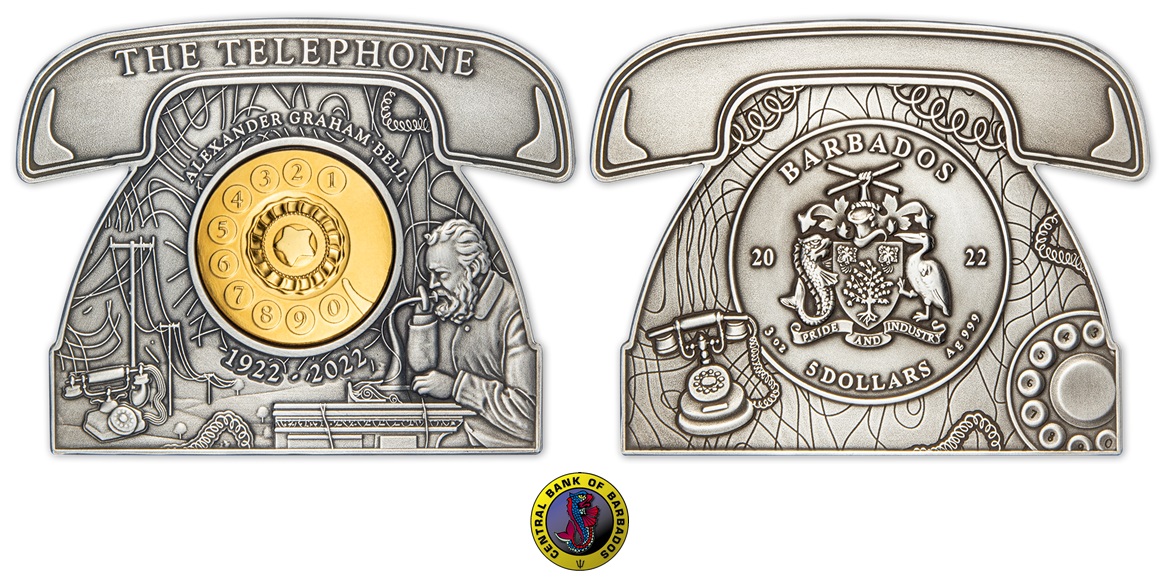 The coins, in the shape of a retro tabletop model rotary dial telephone prevalent during the 1950s, is minted from three ounces of pure silver which is then oxidised to display an antique finish. The obverse side includes background images of telephone wires, a stylish vintage telephone seen to the lower left, and a replicated image of Alexander Graham Bell making one of the first phone calls as he was famously photographed doing so. On the receiver part of the coin, the words THE TELEPHONE are inscribed boldly along with additional text seen around the dial, ALEXANDER GRAHAM BELL and the years 1922 – 2022. As part of the design and as a special feature, the 24-carat-plated dial is centered and rotates freely. The reverse side includes several phone-related motifs, such as a portion of a stylized push-button rotary dial wheel seen in the lower right corner and the image of another type of classic telephone model in the lower left corner. Where the dial wheel would be on the phone, the seal of Barbados is depicted. The shield includes the bearded fig tree and the national flower of Barbados along with supporters, a pelican on the right, and dolphinfish on the left. Above, a hand holds sugar cane stalks, and a helmet rests on top of the shield. Above the crest is the name of the coins’ issuer, BARBADOS, along with the denomination 5 DOLLARS and the year shown as two digits, 20 other 22, placed on either side of the crest. 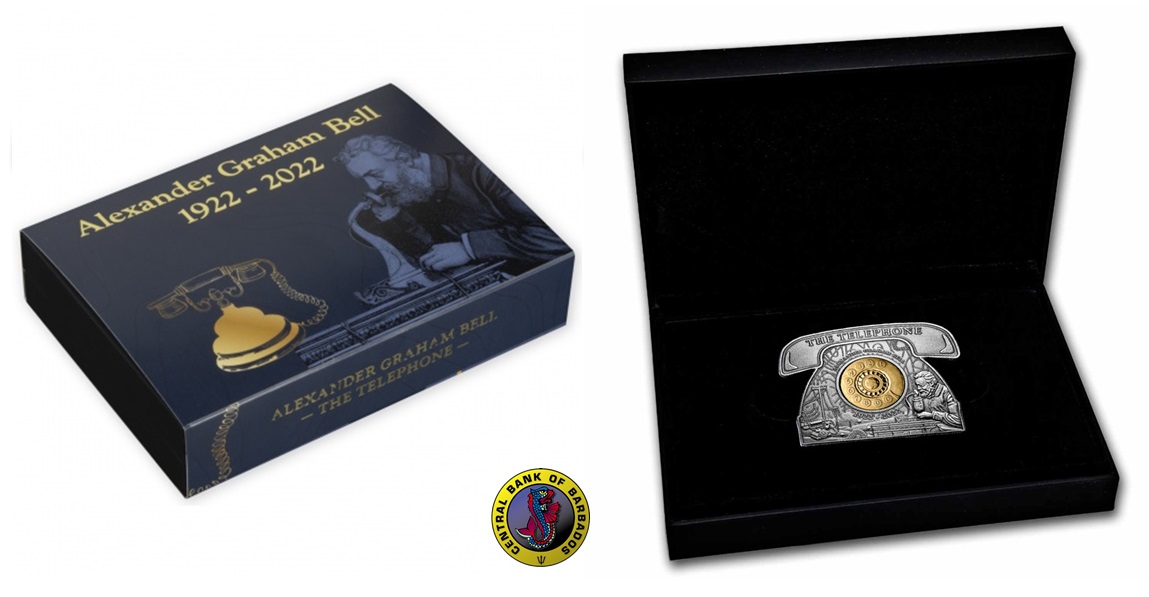 The coins are presented in a custom case crafted to accommodate their bespoke shape and are accompanied by a certificate of authenticity from the Central Bank of Barbados. Collectors in the United States can contact JM Bullion here.