The Royal Australian Mint has released new gold and silver investment/collector coins which are part of their “Australia’s Coat of Arms” series introduced last year. For 2022, the design featured on the reverse is a contemporary rendition of the coat of arms of the state of New South Wales. Granted by royal warrant of King Edward VII on the 11th October 1906, the crest was designed by the NSW government printer, William Applegate Gullick, who arrived in the colony as an infant with his parents. Featured in the design are two supporters, a lion and kangaroo, symbolic of the roots of the settlers from the British Isles and of the new land they live and colonised. The rising sun above the crest has been used in the heraldry of New South Wales since the 1820s and essentially symbolizes hope for the future. Depicted on the shield are elements of the order of the golden fleece and a wheat sheaf in recognition of the wealth of agriculture. The motto below the shield reads ORTA RECENS QUAM PURA NITES, translating to “Newly risen, how brightly you shine.” 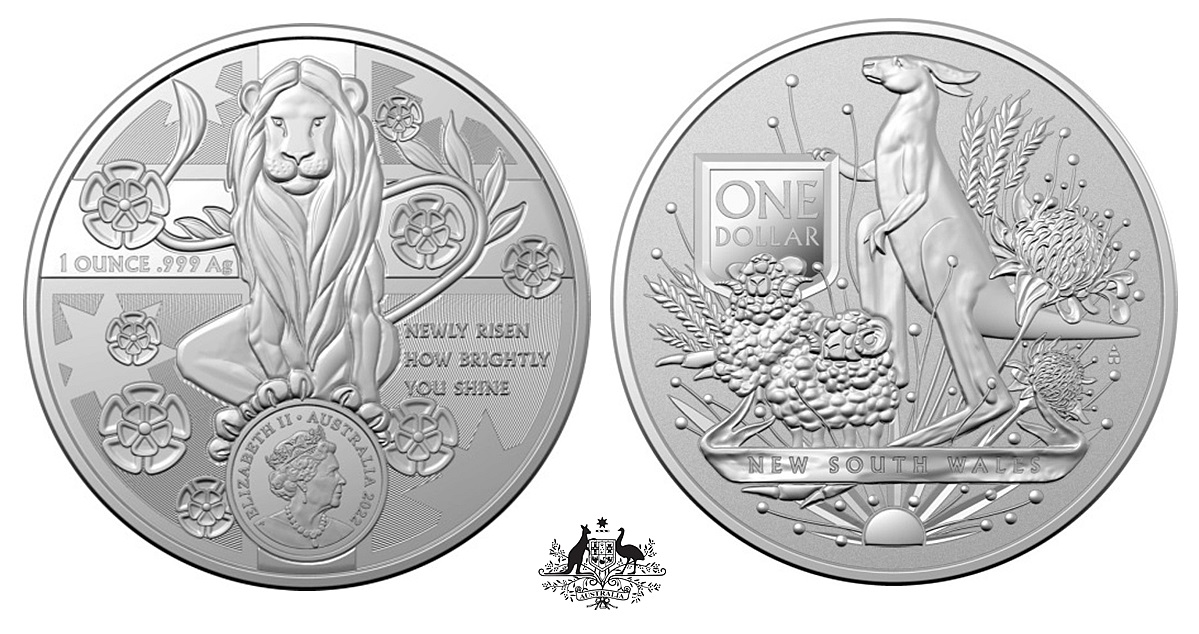 The designs on the obverse and reverse include references to the crest with the image of a lion facing forward and the motto shown in English placed to the right of the Queen’s effigy; the year of issue 2022 is seen in the legend surrounding the Queen’s likeness. In the background is the cross of New South Wales, which is part of the state’s flag. Positioned in various spots are stylized English roses found in British heraldry.

The reverse features a kangaroo along with merino sheep and the rising sun placed below in the design. Also included is the waratah (Telopea speciosissima) New South Wales floral emblem and presents as a large bloom about 10 to 12 centimeters across with a spectacular scarlet colour. The flower grows wild in the bush in clumps of tall stems. The coins’ denomination of 100 DOLLARS (gold) or ONE DOLLAR (silver) is seen just to the left of the kangaroo.

The coins are available directly from the website of the Royal Australian Mint. Collectors in Australia: A limit of 10 silver coins per customer account applies to this product. For additional information, please click here for the gold coin and here for the silver coin.