All the items were previously owned or annotated by noted numismatic researcher and author Walter Breen (1928-1993) and many have his handwritten notes.

Among the highlights of the donation are two annotated drafts of Breen’s massive 1987 masterpiece, Walter Breen’s Complete Encyclopedia of US and Colonial Coins, with thousands of handwritten notes made as he typically did in different color inks. The combined drafts totaled over 3,000 pages and were described by auction house Kolbe & Fanning Numismatic Booksellers as “an exceptionally important part of the Breen archives.” 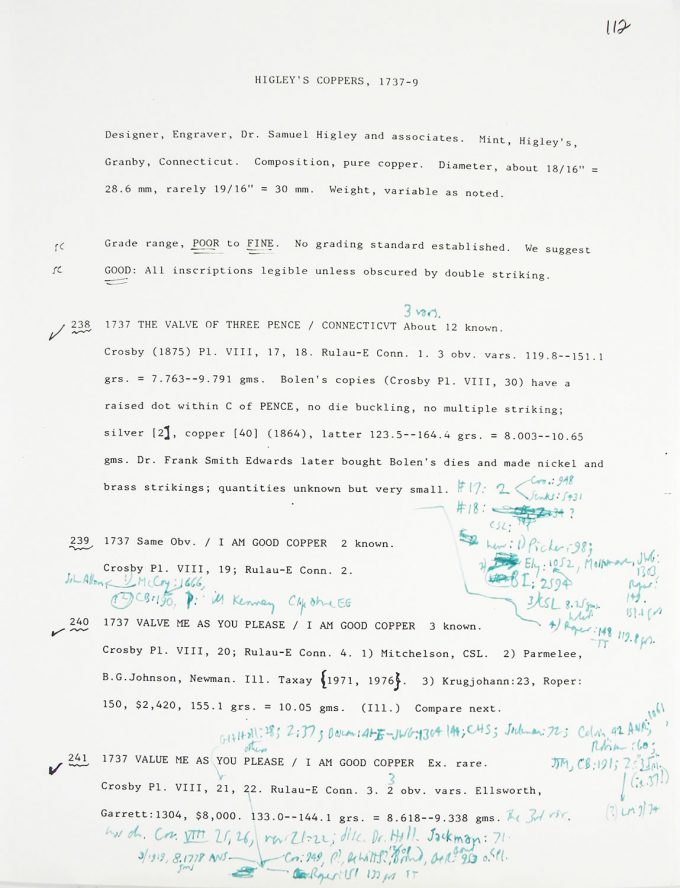 There are 29 auction catalogs each with Breen’s handwritten notes. The sales dates range from a Stack’s auction in 1951 to the Rarcoa offering of the Kaufman Collection in 1978.

The donation also includes several letters Breen wrote and 19 photographic plates depicting colonial-era state and other pre-federal coins with his handwritten notes on rarity. Among the plates are black and white prints depicting obverses and reverses of 1785 Connecticut coppers. These photos were produced by Al Hoch in the late 1960s and are the coins extensively cited in Breen’s famous 1975 Early American Coppers organization sale catalog of Connecticut coppers.

“Walter Breen had a troubled personal life, but he was one of the top numismatic researchers of his era. These important documents can help current and future researchers provide useful information for our hobby,” said Manley.

In 2003, the ANA Library at ANA headquarters in Colorado Springs, Colorado was named in honor of Manley when he gratefully donated $250,000 to the Association. That donation was a “thank you” for the $400 scholarship he received as a teenager in 1980 to attend an ANA Summer Seminar session.

The American Numismatic Association is a congressionally chartered, nonprofit educational organization dedicated to discouraging the study and collection of coins and related items. The ANA helps its members and the public discover and explore the world of money through its vast array of educational and outreach programs, including the Money Museum, located at 818 N. Cascade Avenue, Colorado Springs, Colo. For more information, call (719) 632-2646 or visit www.money.org.

Newer Q&A: Why did the United States begin producing nickel five-cent coins in 1866 when they were still coining silver half-dimes?
Back to list
Older Gold Marks 14-Month Low and Posts Fourth Weekly Loss