Today at noon EDT, the United States Mint will release their 1-ounce, .999 fine 2022-W Uncirculated American Silver Eagle. How many will be available is unknown at this point as their entire inventory was earlier consumed by enrollments.

US Mint product images for their 2022-W Uncirculated American Silver. Each Silver Eagle is encapsulated and placed in a black presentation box adorned with the United States Mint seal. A US Mint certificate of authenticity bearing an image of the refreshed obverse design is also included.

Orders for those enrollments will be processed by the time of the coin’s release, and that should free up some for purchase.

“Customers may still have an opportunity to purchase … after enrollment orders are reconciled,” the US Mint stated. “All inventory resulting from cancellations, invalid, and/or fraudulent orders will be made available to the general public.”

Every American Silver Eagle version has always carried the same basic obverse (heads side) imagery — Adolph A. Weinman’s classic Walking Liberty design which first appeared on 1916-1947 half-dollars and depicts Liberty in full stride, enveloped in folds of the flag. Her right hand is extended while her left hands holds branches of laurel and oak. This design saw enhancements last year when the US Mint utilized historical assets and modern-day technology to better render Weinman’s original work.

“Thanks to technological advancements in the design and minting process, it now encompasses some of Weinman’s original details that were not previously possible,” the US Mint describes.

Among enhanced details is the inclusion of Weinman’s traditional artist mark. Other inscriptions include “LIBERTY,” “IN GOD WE TRUST” and “2022.” 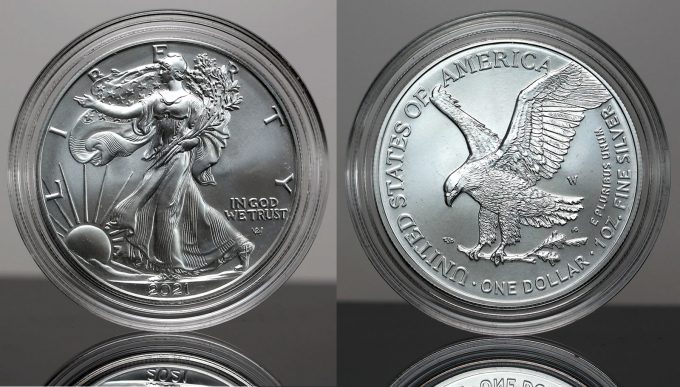 This CoinNews photo shows the obverse and reverse sides of a 2021-W Uncirculated American Silver Eagle. This year’s coin has the same designs and uncirculated appearance.

Along with the enhanced obverse imagery in 2021, the US Mint introduced a completely new reverse (tails side). Created by Emily Damstra and sculpted by Michael Gaudioso, the newer design appears on all 2022 American Silver Eagles — bullion, proof and this uncirculated edition.

Reverse depicting an eagle as it approaches a landing, carrying an oak branch, as if to add it to a nest. Reverse inscriptions read: “UNITED STATES OF AMERICA,” “E PLURIBUS UNUM,” “1 OZ. FINE SILVER,” and “ONE DOLLAR.”

A reeded edge variation was also added as an enhanced security measure.

This production option is restricted to 160,000 coins with an initial household order limit of three.