Offered as the second issue in a five-year design series, the US Mint today releases the 2022-W First Amendment to the United States Constitution Platinum Proof Coin — Freedom of Speech.

The 1-ounce coin is composed of 99.95% platinum with a $100 face value. It goes on sale beginning at Noon Eastern Time.

The themed American Platinum Eagle First Amendment series debuted last year and will continue through 2025. Each is dedicated to one of the five freedoms enumerated in the First Amendment to the United States Constitution — Freedom of Religion, Freedom of Speech, Freedom of the Press, Freedom to Peaceably Assemble, and Freedom to Petition the Government for a Redress of Grievances. The five-coin series features annually changing obverses (heads side) which are based on the lifecycle of an oak tree.

“This series uses the lifecycle of the oak tree from seeding to a mighty oak as a metaphor for our country’s growth as a nation that values ​​freedom,” the Mint explained in a release. “Liberty grows to a thing of strength and beauty from a seed — our Bill of Rights. Each of the freedoms enumerated in the First Amendment contributes to the growth and development of the Nation.”

This year’s proof Platinum Eagle shows a juvenile oak tree framed with the inscription “WITH FREEDOM OF SPEECH LIBERTY BLOSSOMS.”

Obverse imagery for all five coins was created by Artistic Infusion Program (AIP) designer Donna Weaver and sculpted by US Mint Chief Engraver Joseph Menna. Inscriptions on each include “IN GOD WE TRUST,” “E PLURIBUS UNUM,” and their year of minting.

Changing designs are not new for the series of proof coins. Previous issues carry emblematic design themes like “Vistas of Liberty” and “Foundations of Democracy.” The most recent theme centered on the “Preamble to the Constitution” with the 2018 “Life” coin, the 2019 “Liberty” coin and the 2020 “Pursuit of Happiness” coin.

Offered on the reverse (tails side) of this latest coin is a design first seen on the just mentioned “Preamble to the Constitution” series. The imagery was selected as the common reverse for all five of the First Amendment to the United States Constitution platinum coins. It depicts an eagle in flight with an olive branch in its talons. 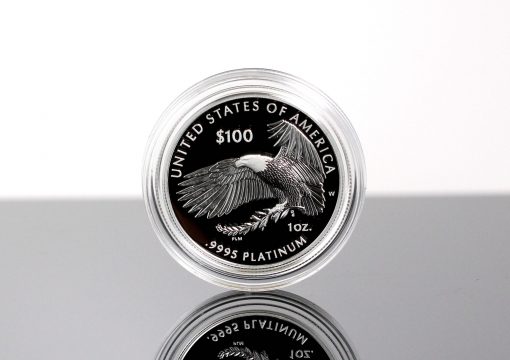 This CoinNews photo shows the reverse or tails side of a 2018-W Proof American Platinum Eagle. The design was shared on the 2019- and 2020-dated editions. It is also shared on the collector proof platinum coins for 2021-2025.

The reverse is the work of Artistic Infusion Program Designer Patricia Lucas-Morris and it was sculpted by Medallic Artist Don Everhart. Inscriptions read “UNITED STATES OF AMERICA,” “$100,” “1 OZ.,” and “.9995 PLATINUM.” An added ‘W’ mintmark indicates the coin is produced at the West Point Mint.

The 2022-W First Amendment to the United States Constitution Platinum Proof Coin — Freedom of Speech may be ordered directly from the Mint’s catalog of platinum coins.

The strike has a maximum mintage of 15,000 and has no household order limits.