The United States Mint at noon EST opens sales for seven products from their 2022 National Purple Heart Hall of Honor Commemorative Coin Program. The National Purple Heart Hall of Honor first opened its doors on November 10, 2006, in New Windsor, NY. It was established to honor the extraordinary sacrifice of America’s servicemen and servicewomen who were killed or wounded in action.

Commemorative Purple Heart products include proof and uncirculated editions of $5 gold coins, silver dollars and clad half-dollars, as well as a three-coin proof set. Later — the US Mint has yet to announce a date, there will also be an opportunity to buy a colored silver dollar.

Appearing on the obverse (heads side) of each $5 gold coin is a likeness of the Purple Heart medal. Inscriptions on the design read “LIBERTY,” “IN GOD WE TRUST,” “THE PURPLE HEART,” “2022,” and “A GRATEFUL NATION HONORS AND REMEMBERS.” The obverse was created by Donna Weaver and sculpted by Joseph Menna. 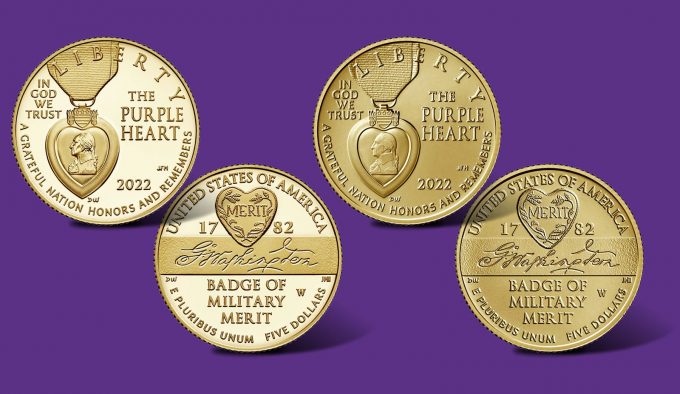 Reverses (tails side) of the $5 gold coins contain a likeness of George Washington’s signature under the Badge of Military Merit and over a textured stripe. Inscriptions include “UNITED STATES OF AMERICA,” “1782,” “BADGE OF MILITARY MERIT,” “E PLURIBUS UNUM,” and “FIVE DOLLARS.” The image was designed again by Weaver with John P. McGraw sculpting it.

For silver dollar obverses, we again find a depiction of the Purple Heart medal. Inscriptions read “COMBAT WOUNDED & KILLED IN ACTION,” “LIBERTY,” “1932,” “2022,” and “IN GOD WE TRUST.” Five stars are shown alongside the medal to represent the branches of the military. Heidi Wastweet designed the image with Eric David Custer sculpting it. 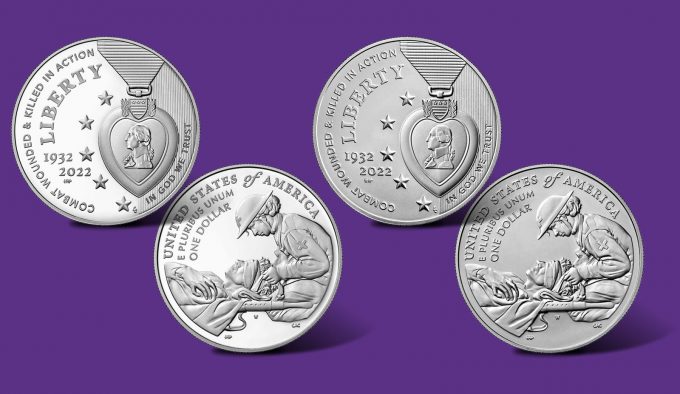 For silver dollar reverses, which was also designed by Wastweet, we see a nurse in a World War I helmet as she bandages a wounded service member on a stretcher. Reverses include inscriptions of “UNITED STATES of AMERICA,” “E PLURIBUS UNUM,” and “ONE DOLLAR.” The design sculpting was completed by Craig A Campbell.

Half-dollar obverse imagery was designed by Beth Zaiken and sculpted by Campbell. It depicts a figure in military fatigues and combat boots using a pair of crutches with the left leg amputated from the thigh down. The negative space below shows the missing leg in silhouette. The Purple Heart medal appears behind the figure with a subtle flag motif in the background. Inscriptions are “ALL GAVE SOME,” “IN GOD WE TRUST,” “LIBERTY,” and “2022.” 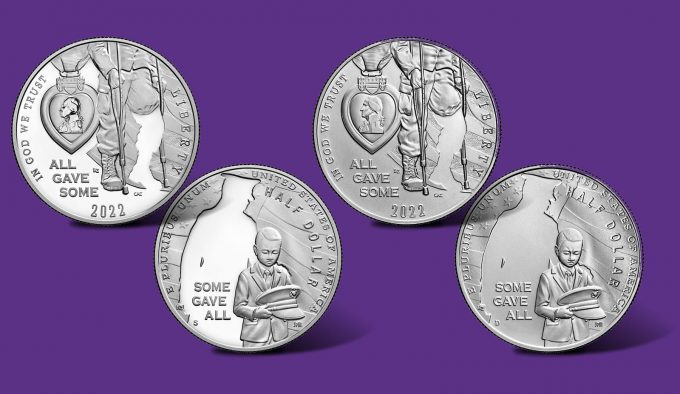 Reverses of the half-dollar offer a young boy holding the dress cap of an enlisted Marine. The silhouette of a marine in dress blues stands behind him in negative space, emphasizing the loss that affects the families of Purple Heart recipients. Inscriptions include “SOME GAVE ALL” in the negative space around the boy in the lower half as well as “E PLURIBUS UNUM,” “UNITED STATES OF AMERICA,” and “HALF DOLLAR.” Zaiken created the imagery and McGraw sculpted it.

Authorized under Public Law 116-247, the commemorative coins are being produced at the US Mint facilities at West Point, Denver and San Francisco to the following specifications:

Maximum mintage for the commemorative coins are shown in the above table. Of those, the three-coin proof set is limited to 5,000 and the yet-to-be-sold colored dollar is limited to 25,000.

Introductory pricing of the products is shown below:

Introductory pricing will last for 30 days – until March 24 at 3:00 PM ET. After which, each price will increase by $5. The three-coin proof set has no introductory price. In addition, prices for gold products can change weekly based on market conditions and are determined by the Mint’s pricing matrix for gold coins.

2022 National Purple Heart Hall of Honor Commemorative Coins may be ordered directly from the United States Mint from their online store of commemoratives.

Household order limits during the first 24 hours of sales include 3 apiece for each gold coin and 1 for the three-coin proof set.

While the US Mint will be accepting orders beginning today, the expected shipping date of the products is June 8.