The 1943/1942-S Lincoln cent, FS-101, in an early die state with doubling under the bottom of the upright of the 4th Photo courtesy Numismatic Guaranty Company’s Variety Plus archive. Used with permission. Hover to zoom.

About 45 years ago, collector Del Romines came into my office at Coin World’s Collectors Clearinghouse with two well-worn 1943-P nickels that he thought were 1943/2-P overdates. I thought that he might be right, so I took pictures of his coins, published them in Coin World, and asked if anybody had a higher grade specimen that could verify the overdate. One week later a member of my local coin club, Bern Nagengast, cherrypicked a sharp brilliant uncirculated specimen at a coin show, and the 1943/42-P Jefferson nickel was confirmed. At the time people were amazed that it had taken almost 35 years for the overdate to be noticed.

About a month ago longtime collector James Elliott contacted me via the Internet and said that another collector in the die variety collecting field, Pete Apple, had recommended that he contact me about a 1943-S cent that he had with a known Doubled Die Obverse that he thought was also a 1943/2-S overdate. As with Del Romines and his 1943/42-P nickels, I think he is right, and my fellow the variety specialists Bill Fivaz, John Wexler, and James Wiles agree with me, as does noted Lincoln cent specialist and author David Lange. In our unanimous opinion, the 1943/1942-S cent is a true overdate! 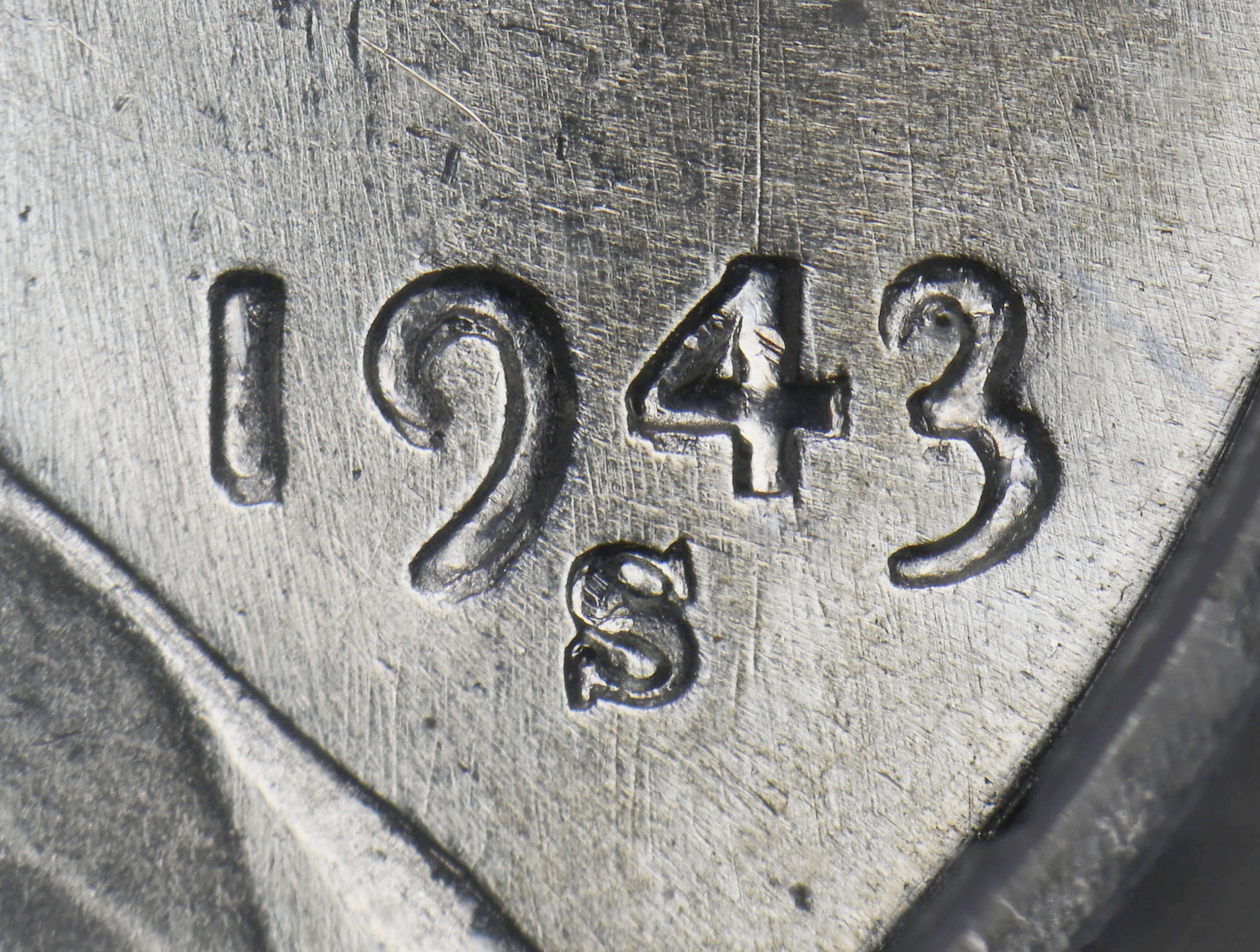 The 1943/1942-S Lincoln cent, FS-101. Since all four digits were rehubbed we are using the entire 1942 as the underdate. Photo courtesy Numismatic Guaranty Company and David Lange. Used with permission.

Though it is a known die variety, and has been for many years, it has only ever been recognized for its die doubling. It is currently listed as such in the Cherrypickers’ Guide by Bill Fivaz and the late JT Stanton as variety FS-101 (019.5) among the 1943-S cents. The (019.5) number is an obsolete reference number from the earlier editions of the CPG, which is noted because it might be found on older TPG slabs. 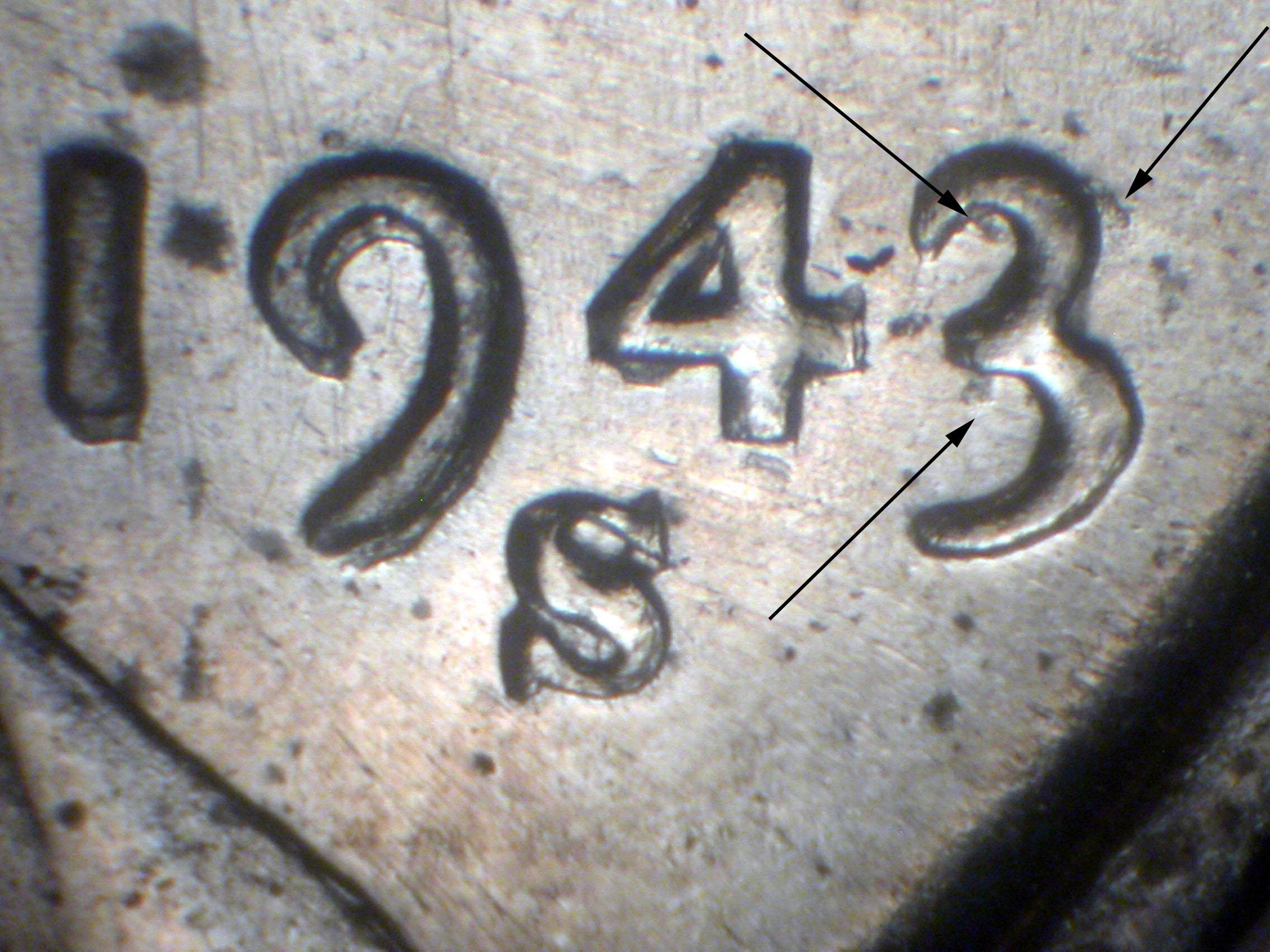 The 1943/1942-S Lincoln cent, FS-101, with arrows highlighting the remains of the 2. Photo courtesy Dr. James Wiles. Used with permission.

The misalignment of the designs between the 1942-dated hub and the 1943-dated hub pivots around a spot on the left obverse rim. Because of this swing, the coin shows only trivial doubling on the word LIBERTY close to the pivot point, but some fairly strong doubling almost due North and South at the base of the 1. There is similar doubling under the top curve of the 9 and along the right side of the leg of the 9. There is extra metal below the sharp left angle of the 4 that corresponds in scale to the doubling on the 1 and the 9. Fairly rare early die state coins will also show similar doubling on the base of the 4, but this feature apparently was either worn off or polished off of the die early in its die life. 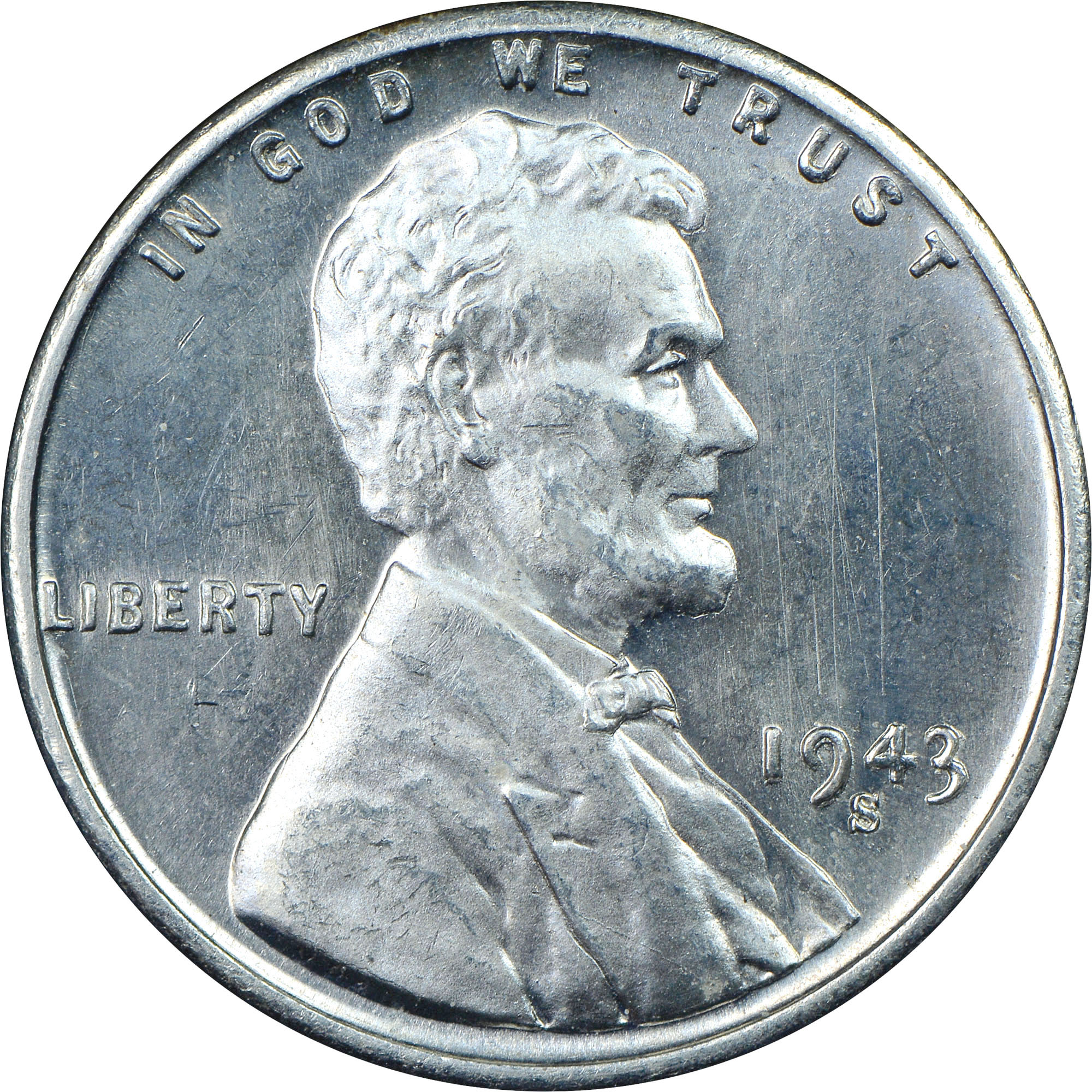 Elliott gets the credit for first suggesting that the doubled die was actually an overdated die, ever since he asked the question back in July of 2020 in a private online forum, “Lincoln Cent Errors and Varieties Only,” on Facebook. As he pointed out, “the extra metal to the upper right side of the 3 matches a 2.” He provided an overlay to show how an underlying 2 could account for that extra metal. As my colleagues and I have confirmed, this extra metal does not line up with any part of the 3 if the entire 1943 date is doubled in a north-south direction, the same way that the 1 and the 9 and the 4 are doubled. 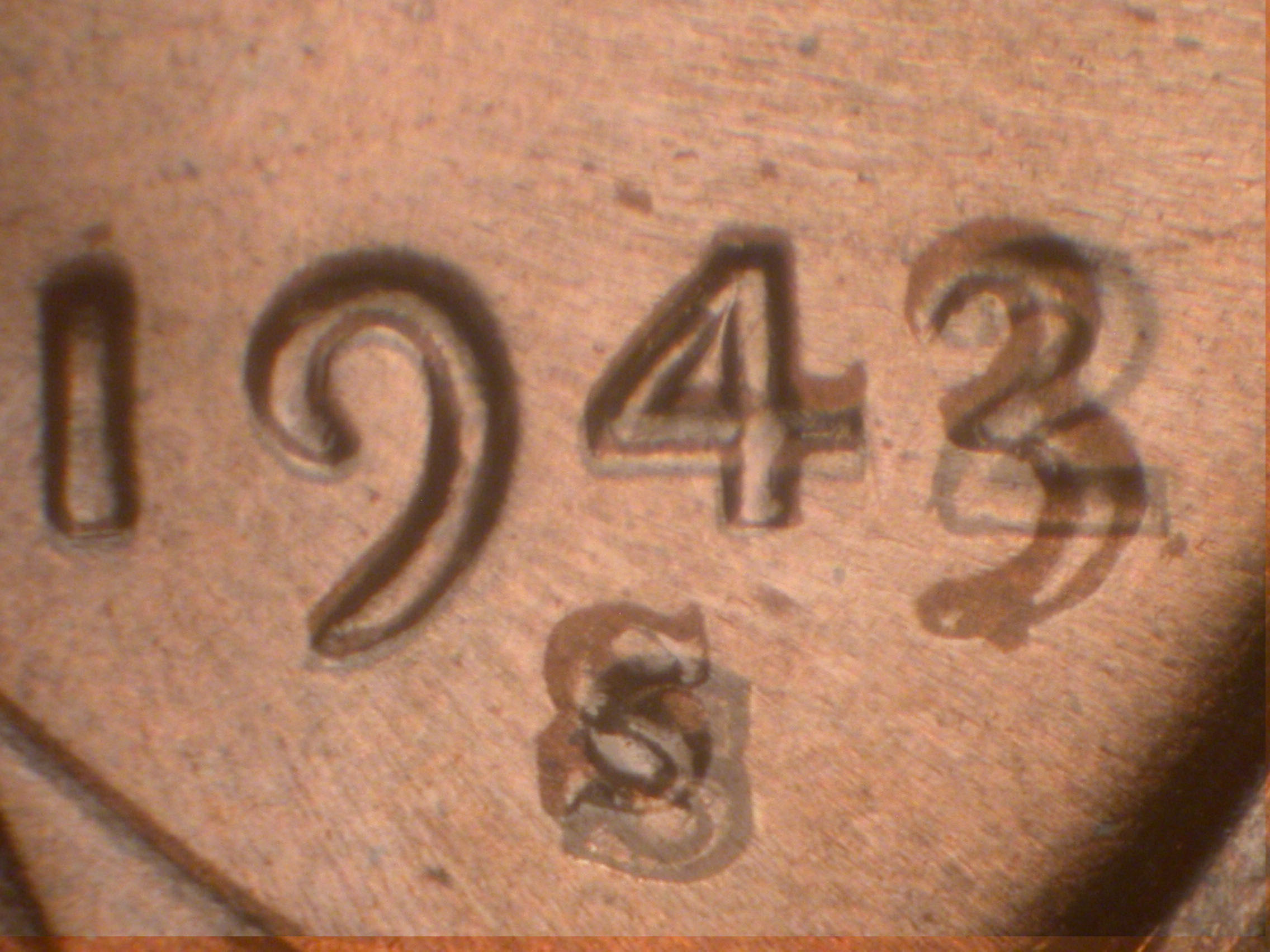 As seen in the attached overlay of a 1943 date and a 1942 date created by the variety specialist Dr. James Wiles, owner of the Variety Vista website, the high arched curve of the upper right part of a 2 falls into the field to the right of the top of the 3. Study the pictures of the overdate, and see that the blob of raised metal to the right of the top of the 3 cannot align with any part of a 3 that is doubled only north and south. 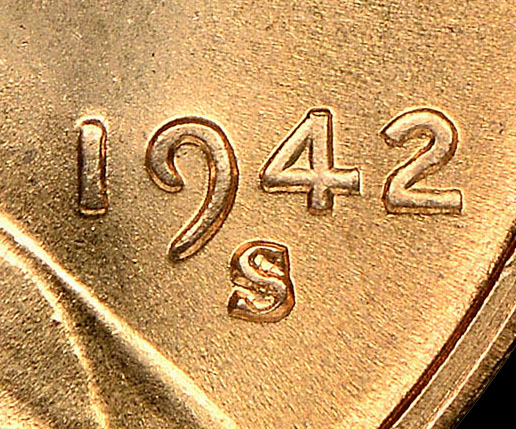 Closeups of the dates on normal 1942 and 1943 cents. Photos courtesy Numismatic Guaranty Company and David Lange. Used with permission. 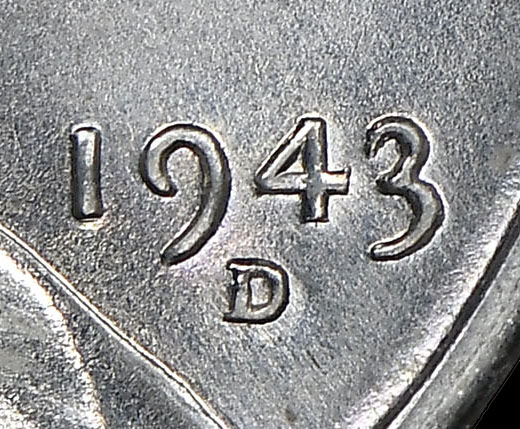 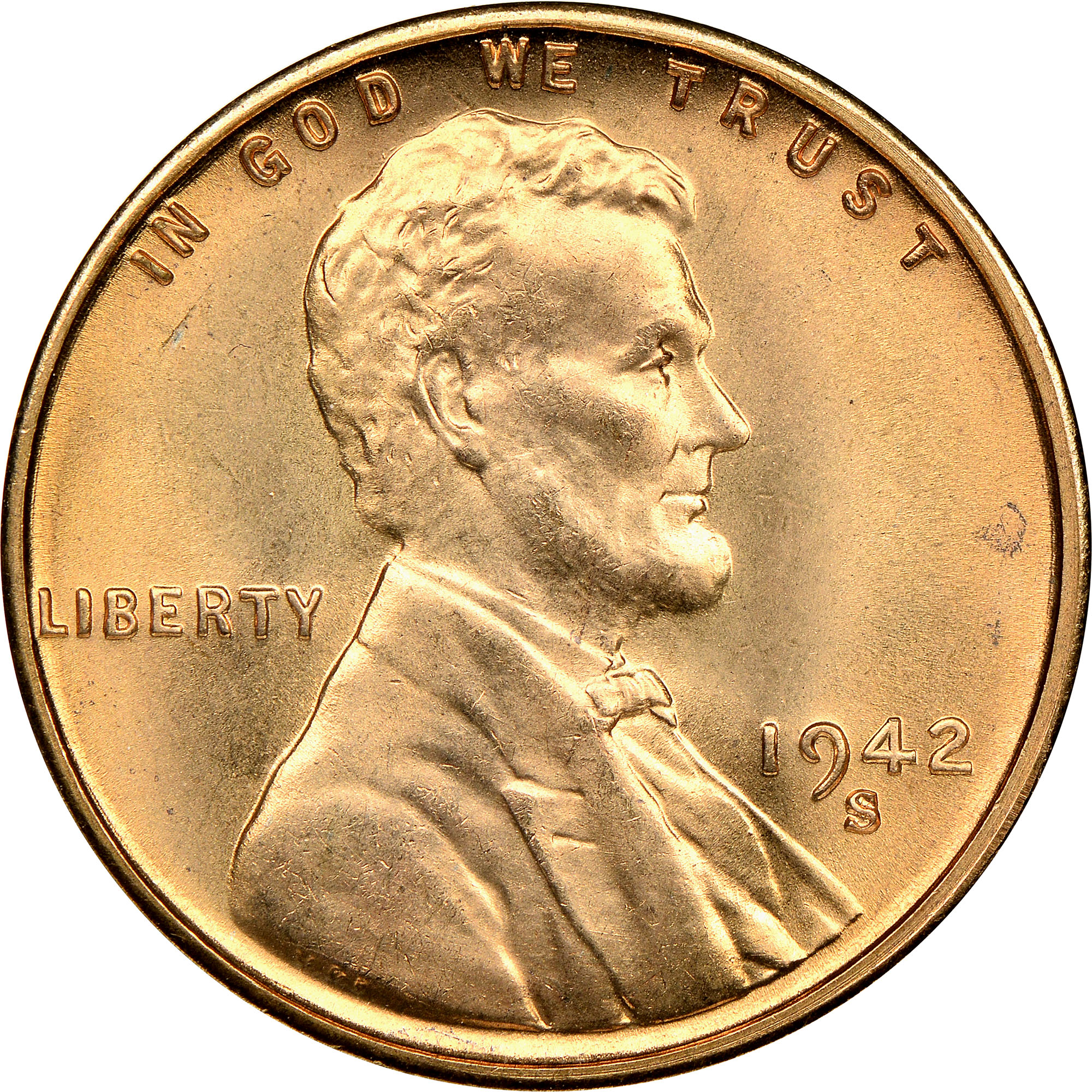 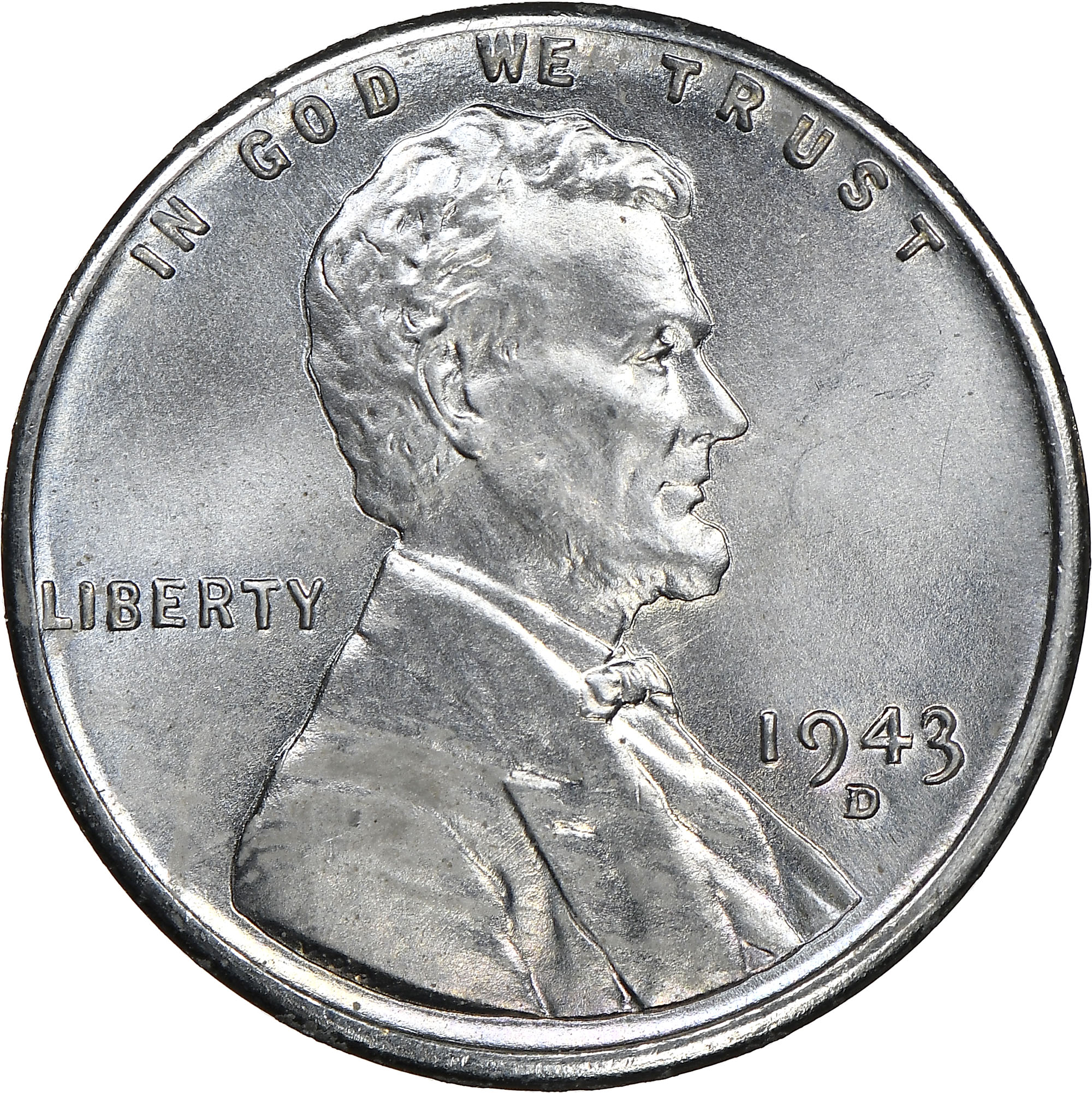 Why is the base of the 2 missing and the upper right curve of the 2 weak? This is a function of the hubbing process. Back then blank this was polished down to a very shallow cone on the end to help the positive steel hub transform the negative steel die more effectively. As the hub came into contact with the die blank the center of the design would form first, and then spread outwards as the hub sank deeper and deeper into the die.

Eventually, the die became work-hardened from all this pressure, and so the hub stopped entering the conical die blank before the design impression had reached out all the way to the rim of the die. The die now needed to be annealed, or heated in an oven to a certain temperature and allowed to cool slowly overnight. This softened the die steel. On the next working day, it was put back under a design hub for another impression. Sometimes this process had to be repeated more than once, depending upon the diameter and relief of the design, the skill of the annealer, the skill of the hubber, etc., etc.

If the second (or third) hub impression happened to be from a different hub with a different date, the result should be an overdate “IF” the earlier date was sufficiently formed during the previous impression(s). Dual date hubbing could have happened near the end of any calendar year when the Engraving Department was still producing dies for current usage from the current year’s hub while simultaneously producing dies from the next year’s hub in order to have some ready to be used on January 2nd .

The same thing happened with the 1909/8 gold double eagle, the 1918/7-D nickel, the 1918/7-S quarter, the 1942/41-P&D dimes, and the 1943/42-P nickel. It has been speculated that it is no coincidence that six of the seven modern hubbed overdates occurred during wartime, when the Mint would be less inclined to scrap out a blundered but perfectly usable die. It is also possible that one or more of the skilled hubbers was off serving his country in the military. 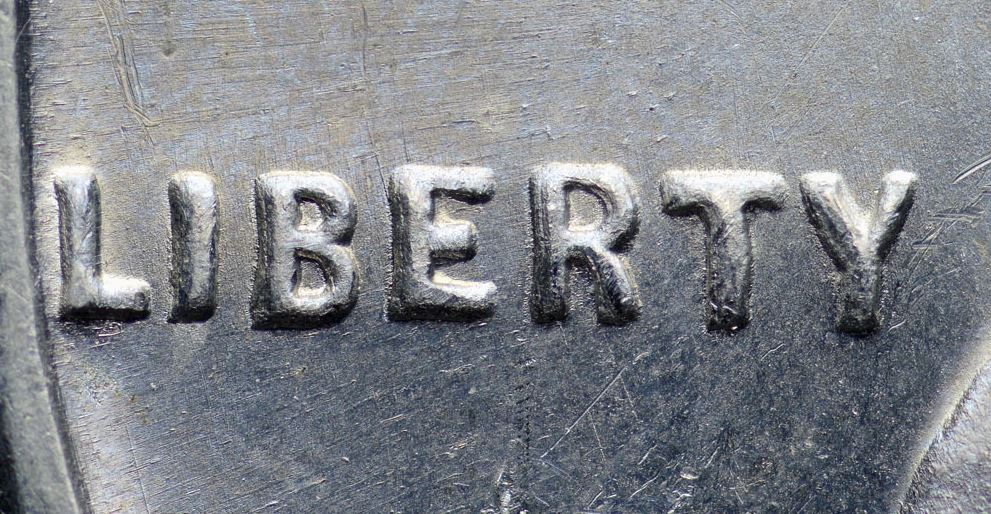 Closeup of LIBERTY on the 1943/1942-S Lincoln cent, showing very minimal the doubling on the BERTY because this area was so close to the pivot point. Photo courtesy Numismatic Guaranty Company’s Variety Plus archive. Used with permission.

On this particular die the outer parts of the design, such as IN GOD WE TRUST, were not formed by the first impression, and so they could not be doubled by the second impression of the hub. Over in the word LIBERTY, the BERTY shows some very trivial die doubling (being close to the pivot point), while the LI show no doubling at all because they did not exist before the second hubbing. The upper-right curve of the 2 was incompletely formed by the first hubbing, while the flat base of the 2 was not formed because it lies closer to the rim.

Something similar can be seen on the 1943/42-P nickel, on which the top of the date is closest to the rim. It shows a strong base of the 2 from the original hubbing, but not the center or top of the 2. The result was a 3 over a partial 2. By contrast, if only the bases of LIBERTY and IN GOD WE TRUST were formed by the 1942 hub impression, the letters were simply finished normally by the subsequent 1943 impression.

Several specimens of the 1943/1942-S cent have been examined. Only the earliest die states show doubling at the bottom of the upright of the 4. Middle to later die states show some strong vertical die polish lines, as might have been caused by the use of an emery stick to clean the die, in the field above the date.

The die variety will continue to be listed in the Cherrypickers Guide as FS-101, though a new description of it will be forthcoming. The description in the Numismatic Guaranty Company’s Variety Plus archives will also be amended.

I would like to thank James Elliott for having the wisdom to look at “what everybody knows is so” and asking questions. I would also like to thank Bill Fivaz, David Lange, John Wexler, and Dr. James Wiles for their invaluable contributions in adding yet another overdate to the canon of American die varieties. To those of you who were amazed when I published the 1943/42-P nickel some 35 years after it was first struck, all I can say 79 years after the 1943/1942-S was first struck is: “KEEP LOOKING!!! ”